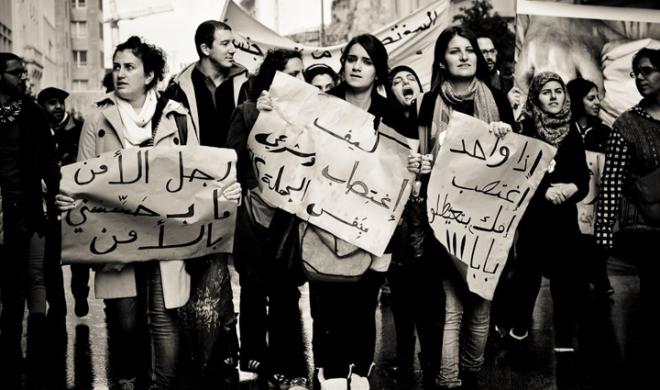 Today’s international efforts to reduce terrorism and war are plagued by widespread ignorance of women’s roles in violence and peace. Conflicts raging across the Middle East today cannot be resolved without deliberate efforts to engage women and confront sexual violence. Syria is a current example of the ways that women are specifically targeted in war, but largely ignored in reports about the violence.

“Rape is used as a weapon in detention, at check points, and during attacks. So far, 76 percent of these crimes are allegedly committed by government officials and the army,” said Lauren Wolfe, director of Women Under Siege, an initiative by the Women’s Media Center.

The center is using a crowd-sourced map to document and collect data about violence against women in Syria. “We don’t know if these rapes are part of an official strategy. But we do know that that the government is aware of it and not doing anything.”

Here are some of the most dangerous myths about women’s roles in conflict, and how to apply the lessons of international violence to local contexts in the Middle East.

Myth 1: War and violence against women are not interdependent.

Groundbreaking studies, published in “Sex and World Peace,” reveal a statistically significant relationship between the level of violence a nation experiences and its percentage of female leaders.

One such study, conducted over 50 years, found that political gender equality had a direct impact on a state’s foreign policy, in terms of escalating violence during an international crisis, and in terms of the likelihood that such violence would erupt in the first place. The study revealed similar connections for both interstate an intrastate conflict. Women leaders also proved more likely than their male counterparts to compromise with opposing sides in a time of war.

Their research also reveal that levels of domestic violence generally correlate with escalating political instability and guerrilla war. Simply put, violence against women perpetuates itself in the society as a whole. The best predictor of a state’s stability is how its women are treated.

In “Women Waging War and Peace,” researchers, scholars and activists published abundant evidence of women’s increasing participation in suicide attacks across the globe. These terrorists were women from diverse social classes, religions and backgrounds.

Thus the authors argue that political struggle, economic injustice, and religious or ethnic conflicts may be lenses through which to frame these actions, but they are not the cause.

One factor alone cannot explain the phenomenon of the female suicide bomber.

On an individual level, there is an understanding of some situational causes similar to those of their male counterparts. These include frustration, devastation suffered at the hands the “enemy” group, devotion to the “cause” that a deceased loved one believed in, feeling oppressed by an unrepresentative political power, and a lack of nonviolent venues for achieving recognition.

But so far, international reconciliation efforts have proven limited by gendered stereotypes and fail to prioritize female combatants.

For example, state and U.N. sponsored Disarmament, Demobilization, Rehabilitation, and Reintegration programs in Liberia and Sierra Leone failed on every level to address the needs of girl child soldiers.

According to research published in “Women Waging War and Peace,” in Liberia over 72 percent of girl child soldiers were excluded from, or were not registered for, benefits and inclusion of any kind in reconciliation. That oversight was a stumbling block in regional peace efforts.

Researchers argue that in order to stop global terrorism, effective programs need to attend to those that have suffered acute histories of physical or emotional violence in times of war, and intentionally integrate them into society.

Myth 3: It is more important to engage political leaders than grassroots women.

Women around the world have used their gender as a basis of solidarity in establishing dialogue across lines of conflict, including ethnic, religious, political differences, etc. In Israel and Palestine, the Parents Circle Family Forum is one of many growing grassroots movements against extremism where mothers serve as leaders, despite the perpetual deadlock between official political parties.

When official reconciliation efforts in other regions were stagnant, women’s groups such as Haguruka in Rwanda, WOZA (Women of Zimbabwe Arise) in Zimbabwe, the AWAW (Association of War Affected Women) and PSMIA (Parents of Servicemen Missing in Action) in Sri Lanka, and the MARWOPNET (Mano River Women’s Peace Network), proved uniquely capable of making peace between communities.

Modern wars are more likely to involve terrorism, urban warfare and civilian casualties rather than battlefields and trenches; women’s capacity to connect communities and combat extremism is key.

Sustainable peace is impossible without deliberately engaging women. Recognizing women in their diversity of roles could be the key to rebuilding communities ravaged by violence.