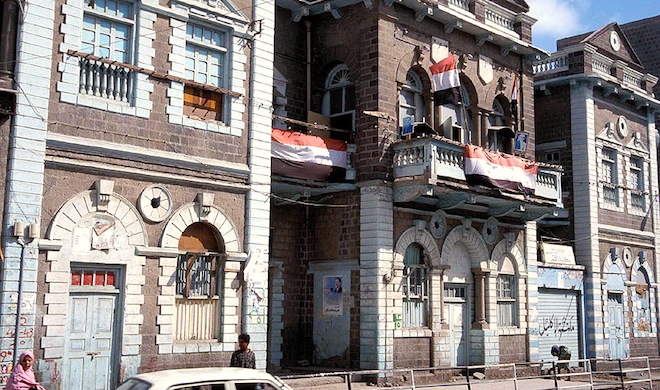 Southerners in Yemen passionately believe Aden is their capital city, and some of them want an independent state. But Sana Uqba says they are not ready.

Decorated with the symbolic red, white, black and triangular blue, the streets of the Southern capital speak the language of freedom and independence. Walls and posters that once boasted profile images of the ex-President Ali Abdullah Saleh are now replaced with proud Southern flags wrapped in familiar revolutionary rhetoric. Looking at the scene as it is, one might think that Aden has indeed freed itself regardless of what those up North say.

Secession is a topic which has been trending since the 1994 civil war which claimed lives, jobs and land. In fact, it is almost as if the act of speaking on this matter is a form of national mourning and commemoration for those of the South and thus letting go of the issue is forgetting the injustice which took place. Many who once held respectable positions in society now spend their days chewing the popular plant Qat; a drug which seems to ease the grievances of the people. A young man I met at a pro-secession protest in 2011 spoke to me of his father’s fate: “He used to navigate ships in the high seas,” he said, looking far into the Gulf of Aden just a few metres away, “now he navigates a taxi on these streets.”

This ship-captain-turned-taxi-driver scenario is all too familiar amongst the people of South Yemen. Civil and military personnel were forced into early retirements while their land was pulled beneath their feet; jobs were handed over to Northerners and wealth was quite openly pocketed. These are just few of many reasons why I was not surprised to spot graffiti in the centre of Aden’s buzzing market comparing the situation of the South with that of occupied Palestine.

Nevertheless I as a Southerner, and as many Southerners believe, this is no reason to sever a tie of brotherhood. Speaking to many Adeni’s last month, I found that most just want to simply live as equal human beings with rights, with education, with employment and with dignity. “Whether these come under the banner of a unified Yemen or separation is quite irrelevant,” they told me “we just want our lives back.”

So then why do the streets of Aden call for secession? According to one member of Islah I spoke to, a small group of youth are given spray paint equipment and are paid to decorate walls, pavements and advertisement boards. “So what if there are Southern flags everywhere?” she asks me, “for all we know this could be the works of one or two youth and we are sitting here claiming all Adenis want secession?!”

Though she makes a fair point, we cannot overlook the thousands who actually do turn up to organised Herak demonstrations and marches. Since the start of the 2011 revolution and following the fall of former President Ali Abdullah Saleh in particular, the small city of Aden has seen an influx of cars, pick-up trucks and buses full of Southerners who passionately believe Aden is their capital city. Just a few weeks ago thousands rallied in Aden and Mukalla, two of many coastal cities in the South, on the anniversary of the 1994 civil war; the driving force and instigator of the Heraki secessionist movement.

Although the humane demands of the movement are completely justified and rational, those who call for outright secession lack an authentic and solid step by step guide and/or plan on how to actually achieve this and what they will do once they receive their land. The movement itself is a product of a series of formations (as shown here) but whether this has been for its benefit or disadvantage is another thing.

While Herak boasts at being the first official ‘Arab spring’, it is no role model for revolution when we look deeper into its factions and leadership. According to Yemeni writer Sama’a Al-Hamdani, Herak possesses seven leaders residing outside of Yemen and more within its borders.

So how can one group with numerous leaders who all chant diverse slogans and have no plan possibly lead and rebuild a broken nation full of broken people? I raised this point a few times during my visit to Aden this year and was met with the same response every time: “we were a modern, forward thinking and civilised society and they (Northern government) ruined us.”

While this is somewhat true, we must recognize that we are no longer under British rule and would not allow imperialism on our soil. The hurtful truth is, the South is not ready to become its own nation again and Southerners refuse to accept this.

The views expressed are the author’s and do not necessarily represent those of Your Middle East.