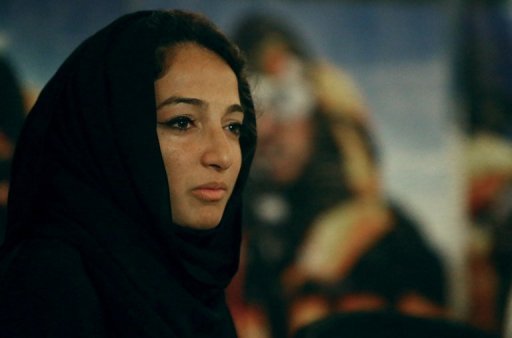 Adventurer Raha Moharrak, the first Saudi woman and youngest Arab to conquer Everest, urged women in the conservative Muslim kingdom of the Gulf to “challenge themselves” as she arrived back in the region.

Her group of four, including a Qatari royal, a Palestinian and an Iranian, was greeted with cheers and garlands of flowers on arrival from Nepal late Sunday at Sharjah International Airport in the United Arab Emirates.

“It was unbelievable,” an emotional 25-year-old Moharrak, covered from head to toe in a black cloak or abaya, told AFP.

“I’m the first but I really hope I’m not the last,” she said. “I hope it awakens the intention in (Saudi) women to challenge themselves more.”

Moharrak reached the peak of Everest on May 19, in a first for Saudi Arabia, the only country in the world where women are not allowed to drive and where their sporting activities are severely restricted.

She left her home in the Red Sea port of Jeddah on April 3 after a year and a half of rigorous training.

By reaching the highest point in the world, she said she has now achieved her ambition of climbing nine mountains, including in Europe, Tanzania, the South Pole and Argentina.

Speaking to AFP by telephone from Jeddah, her father Hassan said: “I’m very proud of her… It’s great what she managed to tell people here and everywhere.”

Moharrak, who had worked hard to convince her family to allow her to scale the 8,848-metre (29,029-foot) mountain, is also the youngest Arab to reach the peak of Everest.

Her parents had “faced disagreements from family members and people in Saudi Arabia in general,” she told AFP.

“As a Saudi girl, it’s normal that I get negative feedback, but it was minimal and the good outweighed the bad,” she added.

Awaiting her arrival at Sharjah airport was the Saudi embassy’s cultural attache in the UAE, Abdul Mohsen al-Harthi.

“This is a message from a woman who wants to say ‘I have reserved a place for myself among you men’,” said Harthi.

“The message is for men in Saudi saying that ‘I, a daughter of this country, have achieved top positions and am capable of doing whatever men can do’,” he said.

Saudi Arabia, which implements a strict form of Islam and imposes segregation of the sexes, this month gave the green light for girls at private schools to take part in sport, but only under certain conditions.

“I did nothing against my culture and religion,” said Moharrak, a slim and tall brunette. “You don’t have to go against society to achieve amazing things.”

Moharrak, like many other Saudi women, hopes that “we do drive one day,” but if this is difficult to bring about, “there are so many other more important things you can be great at.”

Her Palestinian co-climber Raed Zidan said he had left behind a political message on Everest.

“We spent a long time on the mountain… We met climbers from all over the world,” he told reporters. “I told them about the Palestinian cause, about our prisoners in the jails of the Israeli occupation.”

Zidan is only the second Palestinian to summit Everest after Suzanne al-Houby completed the feat in 2011, becoming the first Arab woman to reach the top.

With Moharrak and Zidan was Sheikh Mohammed bin Abdullah al-Thani — a young member of Qatar’s ruling family and the tiny emirate’s first to make the climb.

Their Iranian companion, Masoud Mohammad, suffered from frostbite in his foot which will take months to heal.

All four, graduates of the American University of Sharjah in the United Arab Emirates, climbed Everest to raise funds to help educate Nepalese children.

Thani said they have succeeded in raising “one million dollars”.