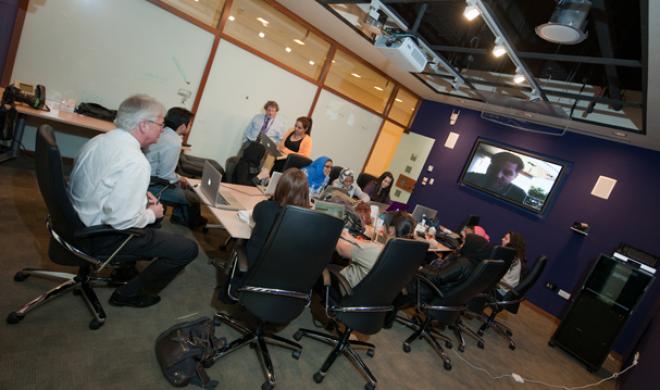 In an attempt to reduce dependence on western sources, a new happening under the umbrella of the American University of Beirut aims to make a big change in the regional discourse on media literacy.

Although the Arab uprisings were accompanied by an improving Internet penetration rate, many universities and higher education institutions in the region still have not incorporated digital media literacy into their curricula.

The Media and Digital Literacy Academy of Beirut (MDLAB) is an initiative aiming to help media scholars and academics in the region develop their digital media literacy curricula. Built on the experience of western institutions in the field, it still recognizes the regional context.

Around 50 media scholars and students from five Arab countries will be meeting in Beirut in August to participate in a summer session on digital media literacy at the American University of Beirut (AUB). The session, formally entitled Media and Digital Literacy Academy of Beirut, will be of the first extracurricular activities of the Media Studies Program at AUB, which was established last year.

The Director of the MDLAB, Ms. Lubna Maaliki, explains that the number of institutions concerned with digital media in the region is low, and the existing ones rely solely on western sources. “The MDLAB is the space to share ideas and expertise among Arab media scholars and students, and to develop academic material on digital media literacy in Arabic language or at least one that consider the context of media in the region,” she adds.

This academy, which is co-organized with the Regional External Programs at AUB, will inaugurate on the 11th of coming August and end by the 28th. Its main activities will vary between lectures, on-hands workshops, and group projects submitted towards the end of the session. The session will be supervised by prominent scholars and experts in the digital media field including Rene Hobbs, the founding director of the Harrington School of Communication and Media at the University of Rhode Island, and Susan Moeller, the director of the International Center for Media and the Public Agenda (ICMPA) at the University of Maryland.

According to Maaliki, the session aims to illustrate the importance of digital media literacy to its participants in order for them to persuade their universities and academic institutions to adopt it in their media curricula. Moreover, content of digital media literacy courses that are specific to the Arab world will be developed during the event. Interestingly, Arabic language will be used in the majority of the lectures and workshops, except for those instructed by western scholars.

Maaliki hopes that the academy will increase digital awareness in the region. She notes, “All the universities and scholars we contacted so far are enthusiastic to be part of this summer session.” She adds that similar sessions will be held regularly in coming years, and will include participants from additional Arab countries; not only the ones present this year (Lebanon, Syria, Jordan, Palestine, and Iraq).

Ed. Note: the academy is sponsored by the Open Society Foundations and co-chaired by Jad Melki, the founding director of the media studies program at AUB, and May Farah, an assistant professor of media studies at the same institution.