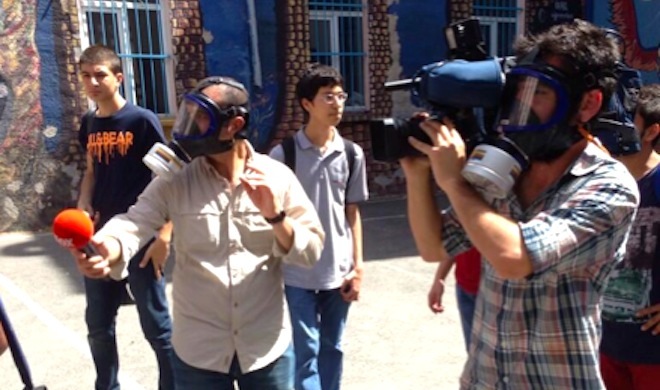 Your Middle East's Aslihan Agaoglu reports on the dramatic scenes currently played out in the Turkish capital.

There is a huge protest going on in Taksim today. It started as a small peaceful protest against the government and the prime minister’s decision to demolish an old park and cut the trees to build another shopping mall. The protest was huge, almost 10.000 people but very peaceful – singing, dancing, many artists also joined.

But this morning at 5 am police attacked them with pressured water and heavy gas bombing, without any prior notice. People are severely hurt yet they will not budge, the protests are growing and now it is spreading to other cities such as Ankara, Izmir and Bursa. Tonight at 7 pm protests are being planned in all major cities to save the Gezi Park.

“In the early hours of 30 May, police moved in to destroy their tents, and used pepper spray to disperse the protestors. A 23 year-old protestor was seriously injured after sprayed with tear gas, kicked and hit by police when he was holding onto a tree.”

In my opinion, this may have started to save the trees, however, now it is so much more than that. People are angry. They are angry at the government. They are angry at the police. And the media… It is ridiculous; there is this huge thing going on at the heart of Istanbul yet there is absolutely no media coverage because of the censorship.

#DayanGeziParki (which means Resist Gezi Park) is a worldwide trending topic on Twitter yet there is nothing on Turkish TV or newspapers. See two of the most recent tweets below;

We all rely on social media. Many journalists are also injured, but the police do not allow ambulances to enter Taksim. They closed down many roads.

I have a feeling that this may be the beginning of something even bigger.