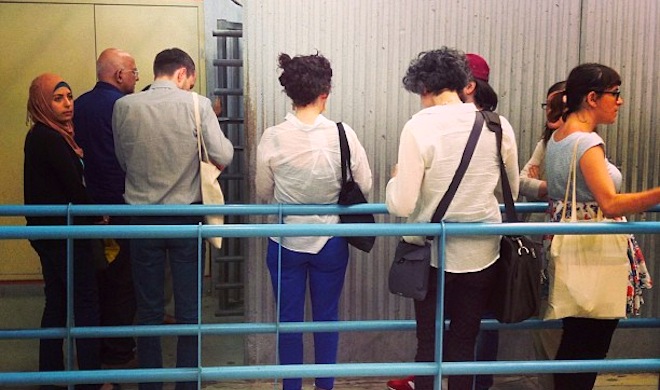 Our columnist Marcia Lynx Qualey, also known as blogger Arablit, looks back at what might be the most challenging festival in the world of literature.

At the usual sort of literary festival, a visiting author appears briefly and does a public reading, Jeremy Harding said on PalFest’s final night in Ramallah. After that, the author either goes back to his hotel room or wanders around the host city:

But the Palestine Festival of Literature is different, Harding said.

PalFest, which ran this year from May 25-30, is perhaps the most physically and psychologically challenging festival in the literary world. The authors hold writing workshops and perform at literary events in several cities – our group did them in five – but we also traveled to additional cities and villages; met with community workers, hospital managers, musicians, poets, and UN representatives; climbed through rocks and brambles to stand at the top of a hill; and stood around at checkpoints. We also spent a great deal of time with one another.

Novelist Ahdaf Soueif, who founded the festival, said she felt the festival was reaching a bigger crowd this year.

“It seems like a really bad idea to put a group of writers together in a minibus,” poet Tom Warner observed as we were on our way to the airport. “Or maybe that’s just poets.”

And yet, despite the lack of sleep, logistical difficulties, and long bus rides, it worked.

For a few of the writers, the days were over-engineered, and they would have liked to explore more on their own. But, as author Aamer Hussein said near the end of the trip, “I don’t think any of us could say we regret coming.”

Events in different cities had far different tonal registers. Ramallah and Jerusalem literary evenings brought in more of an international-feeling crowd, whereas those in Haifa and Nablus were younger and more local. The latter events were also more fun, perhaps in part because they were emceed in Arabic. Each city had its own distinct character. The audience in Haifa was largely made up of Palestinians with Israeli citizenship; the Nablus event was full of Palestinians under military occupation; Ramallah was also under occupation, but had a protected, bubble-like feel.

The crowd in Nablus, around 200, was definitely the largest.

As that group traveled around up north, another group held meetings, writing workshops, and events down in Gaza. Because of restrictions on travel, the two groups were unable to meet.

Novelist Ahdaf Soueif, who founded the festival, said she felt the festival was reaching a bigger crowd this year. She said the fest, now in its sixth year, was also getting progressively younger and hipper. It was also a multi-media affair: There weren’t just a variety of literary forms, but also various types of music, film, and stand-up comedy.

There were notable stumbles in translation. Most of the authors who traveled with the group write in English; many didn’t know Arabic. Sometimes it worked: An excerpt from China Miéville’s story “The Foundation” was translated and beautifully performed by Palestinian actor Mohammed Bakri; poets Najwan Darwish and Tom Warner traded off reading each other’s work. Gillian Slovo’s courtroom drama Red Dust was translated into music by Tareq Abboushi.

Sometimes the translation didn’t come off: In Nablus, Miéville read a performance-poem-like text about his impressions of the trip. But the Arabic translator took one look at it and said it was beyond his capabilities. So Miéville read the complex, poetic text in English, without translation, and it failed to resonate with most the crowd.

The days were also filled with wild shifts: from Jim Crow-like Hebron to a stand-up comedian in Haifa; from juice at the seaside in Akka to settlement-ringed Nablus; from the infamous Qalandiya checkpoint to the British Council’s garden in Jerusalem.

The festival ended with a community open-mic night in Ramallah. As novelist Gillian Slovo observed, the festival was at least as much about authors listening as about them speaking.

Basel Zayed on Translating Poetry into Music: ‘I Believe That Words, They Come Up With the Music’

What is Cultural Boycott?

The City and the City

Experiments in Translation, Laughter in Gaza