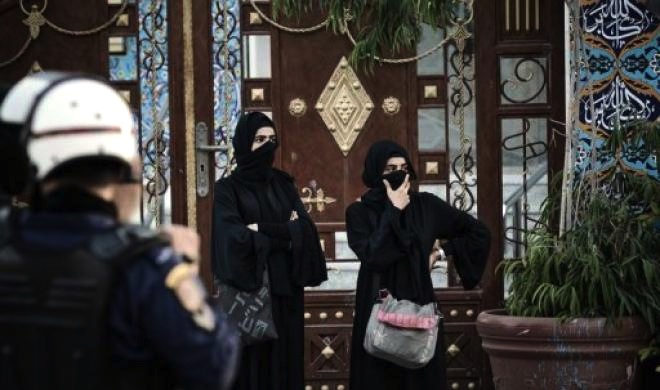 An ethnographic researcher interested in urban social change went inside old Manama to document a typical weekend protest and to see how the different actors in this particular urban drama relate to one another.

While the story of Bahrain’s current unrest is told visually through the drama of mass protests, bloody injuries and gas-clouded barricades, there are other stories of rebellion playing out daily in streets and houses all over the island.

I went to an unofficial protest in Manama souq today. Walking into the souq I am surprised by how lives co-exist at the same time. Tourists are milling about, workers are working. But huge numbers of police vans are parked just inside the souq entrance at Bab al-Bahrain.

They ignore us. They have large guns, some long, some doubled, some short. Many are battered and chipped. One holds a tear gas canister in his left hand, supporting the gun with his right. Standing there.

Making our way into the souq through South Asian-staffed shops, still inviting us to buy, I see the familiar white-helmeted, navy-blue-uniformed figures waiting at the end of the side streets. There is an unusual sense of expectation, of pause.

Women do not normally loiter in the streets of Bahrain and the souq is normally full of men. But today there are Bahraini women in twos, standing, checking their phones.

As I go further in towards the residential areas away from the main souq, groups of black-clad girls appear. They giggle amongst themselves then disappear round a corner only for another group to appear out of a doorway. Some older women are wandering about, standing in doorways, going back inside.

The streets are narrow and winding and I can’t tell what is around the corner. An old and a middle-aged woman approach us, say hello and ask “Where are you going? Will you take photos?” I reply, “We want to see what is happening.”

They direct us to the souq, but then invite us to come with them. We round a corner into a doorway where inside there are about 15 women dressed to go outside. We chat for a bit about where we are from then we prepare to leave as they leave. But they will be leaving in small groups: big groups will be targeted by the security forces. I was given some advice: “If you run, they shoot. So walk.”

We go outside to find more mingling people, trying to look casual in groups whilst buzzing with bursts of expectation. And they are all women. When I ask where the march is they say that the police “keep us indoors.” “They keep us in the houses and cut us off so that we can’t gather.”

The cry of ‘Down with Hamad’ starts up and I get worried. “You’ll get gassed!” I mentally reprimand them in mild panic. I try to hide in a semi-built building with two South Asian builders inside. The women call me out saying that the workers might be informers.

Someone would shout a warning and we would scuttle into the nearest house. In the front room we stand (shoes on) on cushions and I am invited to squint out of a barely open shutter at the street outside.

“Shh!” Police run by, heavy-footed. Some have dogs on leads. The street empties. Then the street fills with a rush of riot police. Batons, shields, dogs. A group of them spot a banner stuffed behind an electricity box. They pull it out, clumsily trying to read it like a commuter with a broadsheet and take it away. As they leave one looks straight into my blue, plastic-rimmed eye peering round the shutter.

I ask the women and girls if we will cause trouble for them being here and they say the builders probably told we were here. Police gather outside and I offer to give myself up to prevent the house being gassed as is the normal tactic. I was told not to be so stupid and eventually the police left.

Throughout all of this the two builders had been hauling rubble in and out the building opposite. Part of me felt the women were increasing the drama, but as I stepped down off the cushions my legs were shaking. The fear of what the police are capable of works well as a deterrent against me at least, if not against the girls and women who do this every weekend in Manama and on weekdays in their villages. They live elsewhere but come here at weekends to the places where their grandparents grew up.

One of the girls, a university student, pulls a small vial from her purse. It is something like eucalyptus to open up the nose when gassed. “You should carry one,” she says. After drinking juice and porridge we left the house, escorted by an old woman who strode out in front of us as if not with us, but talking to me in Arabic.

Striding past two groups of police tapping their batons on the ground she barked “They’re lost!”,  turned round and left us. We walked on, gas in the air and the occasional cry of “Down with Hamad” from the streets around us.

We emerging onto a bigger street lined with police running haphazardly about. There would be a noise further down the street and one would dart off for a few paces, falter, then dart back to where he was. Patrols were walking around filming everyone in the street. Tear gas canisters are scattered in the road.

Four security forces were telling a group of four Bahraini women and two Bahraini men standing in front of a café to move on. They were arguing with them demanding “Why?!” I stood right next to one, staring at him. He told me to move: “Mamnua’!” (forbidden). Feeling bolshy again I asked, “Why?” “Mamnua’!” I conceded a step.

Barrage after barrage of gas could be heard. We walked away, not wanting more than the mild stinging of gas we could already feel. Walking away I saw a pack of police with a pack of dogs pursuing a group of girls round a corner. Packs moved in from various streets, marching past us. They move in herds but they don’t look very professional. In the backpack of one South Asian officer that trudged past us was a Bahraini flag poking up. Affirmation lest he forget.

I write this like it was an adventure for me. But this is every weekend in Bahrain. This is every day. And this was the tamest of experiences.