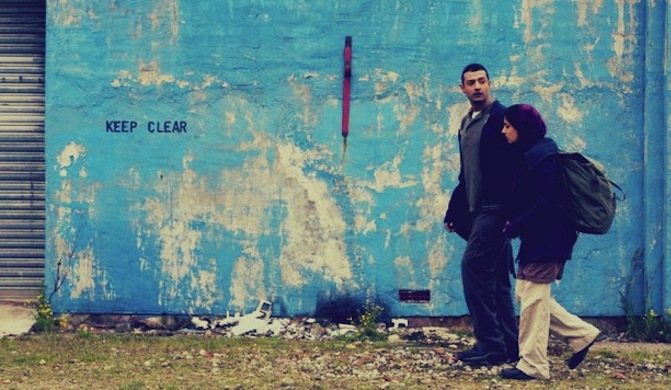 Joobin Bekhrad reflects on Tina Gharavi's coming-of-age film about the experiences of an Iranian immigrant girl in England.

On that bright, sunny day in the middle of the sweltering month of Mordad, I saw the ends of your loose, red hejab fluttering gaily behind you as you clutched onto your aquiline-nosed paramour on his motorbike, laughing like a little girl. At that moment, it seemed as if you had brought that squalid city to its knees. Like the limpid rays of light shining through the gap in my car window, the unmistakable chime of those sparkling, jangly guitars, along with the words of the romantics whose pictures adorned our sooty walls seemed to echo your thoughts: everybody wants to rule the world.

My poor Nasrine, there was not even a soul to recite the fateheh for him

My poor Nasrine … how awful the night the bearded ones dragged you away to the station. Bathed in a cold sweat, frail from their biting sarcasm, you gasped in horror as they pushed you to the floor. While one clutched onto your writhing frame, defiling you with his ominous appendage, the other laughed with delight, soaking in your every scream and squirm and the twinkle of your eye, wet with tears, to savour it all, over, and over, and over again. Only hours before you were just a girl. How could you bear to look your father in the eye again, when he picked you up from the station? How did you answer your brother’s taunts and your mother’s impending gaze? Where was I to rest your head on my breast, one last time, as they played with your destiny in hushed tones downstairs? When they told me you and Ali had left for England, I was incredulous. England … those wily, misty moors, the village green, the trams of old London … where did you go, Nasrine?

When they rejected your appeal for citizenship, the crimson of your ripe, ruddy cheeks flushed into a deathly white. You didn’t think it was going to be that easy, did you? Luckily, Ali had his wits about him, and managed to get you two a place. A hundred blessings on your father’s house! Ali wasn’t exaggerating when he called it a dump. With all your expenses, though, and Ali’s menial job at the local carwash, that was the best you could do. He was lucky not have gone to work that day, wasn’t he? They would have sent you two straight back to Tehran. Khoda ro shokr. Thank God. You shouldn’t have been so harsh with him. You were the only thing he ever had.

Things picked up for the both of you, though, fortunately. Just when you thought you weren’t going to fit in, you caught Neil’s eye. Rough hewn, broad shouldered Neil with his slicked back hair, sitting proud and virile atop his wild, black stallion … he belonged to a different age, a different time, just like a proper pahlevan. Ali never liked him, though – and how could he? In his eyes, you’d always be a baby girl, your skin far too tender for the rigour of country life and the coarse hands of a farmhand. Poor Ali. How he kept it a secret all those years is beyond me. You always knew, though. Ali was never like the other boys …

When you rang your mum and dad from that odious phone booth ridden with peeling pictures of pin-up girls and reeking of urine, you lied. You told them everything was alright, and that you were OK. Why didn’t you tell them you were living under the seedy glances of hooded ruffians, who spat behind your back and cursed you under their stale breath reeking of yesterday’s lager? That Ali lost his job at the carwash, and was reduced to serving doner kebabs and fried chicken to spotty lads, who had barely relished love’s first kiss, yet who fornicated with wild abandon in the sickly sweet haze of rubbish and vomit, drenched in the orange glow of gaslight alleys? What would baba have said had you told him about how you daubed your lips with rouge, and exposed like carrion your supple limbs, ripe for the taking? And what about Ali and Tommy? Estaghforollah.

When that tousle-haired dandy strode into the kebab shop and set his heart aflame with his boyish charm, he sealed your brother’s fate. No longer was he the boy in his baba’s house surrounded by voices telling stories of hell, damnation, and cardinal sin. Some vagrants caught them them kissing in a battered bumper car in the amusement park at dusk, amidst the stench of burnt rubber and popcorn, though the hordes of grubby, pimpled kids had long retired, along with the whirling Indian dervish. Ali seemed so happy afterwards, yet, at the same time, so frightened. Oh, Ali jan, didn’t you know that the streets of South Shields had no place for your love?

They found him too late. In the cold dead of night, they closed his eyes, blanketed him in white, and shuttled him off. My poor Nasrine, there was not even a soul to recite the fateheh for him. Far away from the warm embrace of his maman and baba, he left us on the icy steps of a crumbling council flat in a windy little English town.

And you, Nasrine, now had no one but a drifting cavalier to caress your sunken cheeks. Yet, in spite of it all, you again called your baba from that putrid telephone booth as those buxom pin-up girls once again regarded you lasciviously from overhead, and told him that everything was OK. Perhaps you weren’t lying this time, though; perhaps something much stronger, more gripping than fear had rooted itself in you. Emanating from within, it told you that you didn’t want to leave, that you were no longer daddy’s little girl, that things just might turn out OK.

I am Nasrine, it whispered softly.