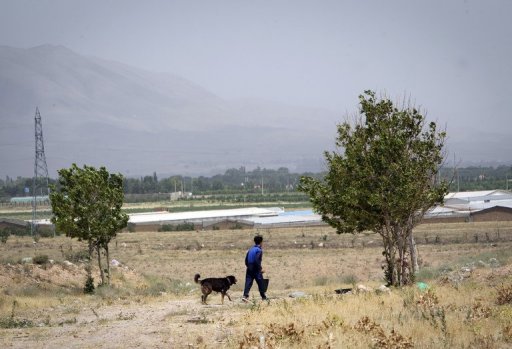 Iran is again cracking down on people with pet dogs, viewed as unclean in Islam, but Soroush Mobaraki says sales are booming despite fears the pooches might be “arrested” and their owners fined.

This veterinary pharmacologist, sitting in the small Tehran pet shop he owns, said “there has been a sharp increase in demand for dogs in recent years.

For decades, keeping dogs as pets was a rarity and thus tolerated in Iran, where the Islamic beliefs cherished by the vast majority of traditional Iranians consider dogs as “najis”, or unclean.

Guard dogs, sheep dogs and hounds have always been acceptable, but the soaring number of pets acquired by a middle class keen to imitate Western culture has alarmed the authorities in recent years.

They have now criminalised walking dogs in public, or driving them around the city.

“You see, for me, she is not only a pet but a family member,” 28-year-old Nahal, who declined to give her full name, said of her two-year-old Pomeranian.

Mobaraki says many Iranians today boast about their pets, and some even show off in style.

Reports of lap dogs dressed in Western designer clothes and accessories being driven in fancy cars, or walked in parks in affluent Tehran neighbourhoods has drawn the ire of hardline clerics.

In June 2010 Grand Ayatollah Naser Makarem Shirzi labelled dog companionship as “a blind imitation” of Western culture, warning that such behaviour would lead to family corruption and damage societal values.

“Many people in the West love their dogs more than their wives and children,” the ayatollah was quoted in the media as saying.

Those remarks, and a decree issued by Shirzi, gave ground to the ministry of culture and Islamic guidance forbidding all media from publishing any advertisements about pets.

The restrictions, implemented in 2010, forced many breeders to keep their dogs out of sight.

“We are not allowed to keep them in pet shops,” said Mobaraki, who spoke of his safe haven in a garden outside Tehran. “I only bring them here when I have struck a deal in advance with the buyer.”

The popularity of this un-Islamic trend has also forced the police to reinforce its sporadic crackdown on dogs.

Police “will confront those who walk their dogs in the streets. Cars carrying dogs will also be impounded,” deputy police chief Ahmad Reza Radan said in April, according to the Fars news agency.

Animal rights activists question the legality of this.

“There are no laws that forbid dog ownership, or their transportation,” said the Iranian Society for the Prevention of Cruelty to Animals in an open letter to Radan’s boss, police chief Esmail Ahmadi Moqadam.

The society’s complaint against what it called “a widespread arrest of dogs”, in which dozens had been taken to “undisclosed locations”, never received a police response.

Bahman Keshavarz, ex-head of the National Union of Iranian Court Attorneys, said pets can only be legally taken away if the owner fails to observe hygiene standards.

“Confiscating pets without a judicial verdict is unacceptable,” Keshavarz said in remarks reported by Bahar daily on May 4, arguing that owners can file for losses under the civil liability law if their pooch is taken away illegally.

Previous crackdowns had seen dogs returned home after their owners paid a fine and signed a pledge to observe the moral code. But some say that is no longer the case.

“Owners are being told that their dogs will be killed, and no paper (confirming the confiscation) is given to them,” a Tehran pet hospital chief, Payam Mohebi, was quoted as saying by Bahar.

For now, the police warning seems to have effectively scared off dog lovers, forcing some to walk their dogs in secluded areas and ask for home calls by vets.

Nahal said she walks her pooch at night to avoid confiscation, but some others are left with little choice.

“I don’t dare to take my dog out with me anymore,” said a middle-aged woman, who asked not to be named, at a family picnic in a park in western Tehran. “So we left her home today.”

The 2010 ban on pet-related advertisement, including pet food, has redirected some animal enthusiasts to the Internet.

“Most of our customers go on our web site to pick the dog they want,” said Mobaraki, who refused to share the Internet address for fear of retribution. “There they can even find useful information on different breeds, and on how to take good care of pets.”

The online practice picked up after lawmakers in 2011 proposed a law to ban dogs from public places and even private flats, saying pet ownership posed “a cultural problem” as well as “a danger to public health”.

The bill, addressing a “growing number of dog owners”, specified that violators would be fined and “their animal confiscated”.

But it was never put to a vote as some lawmakers, as well as animal rights activists, persuasively opposed the motion.

Today Iranians can go online to find professional dog training schools, private trainers and even “dog hotels”, most of which boast international certificates and even experienced foreign trainers.

But there can be a downside to the market.

Breeder Amirhossein, 42, from the central city of Isfahan, said some of his competitors keep their animals in cramped, dirty conditions without sufficient veterinary care.

And then there are instances of false advertising.

“The web sites attract dog buyers with irresistible pictures and phony promises,” he said. “But the dog you get may not be the one you picked.”