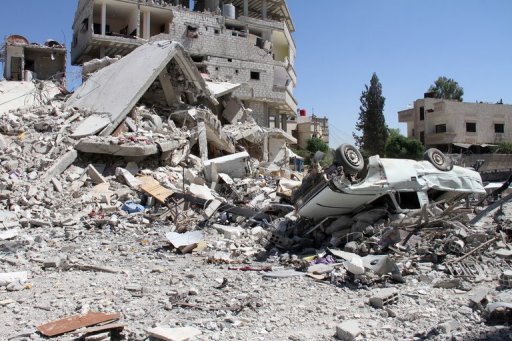 President Barack Obama expressed skepticism that setting up a no-fly zone in Syria or other major US military action could save lives or tip the balance against President Bashar al-Assad’s regime.

Speaking to PBS television, Obama said critics urging bold intervention failed to understand there was no simple solution and “if you set up a no-fly zone, that you may not be actually solving the problem.”

The US president has been accused by some lawmakers of dithering over Syria, but Obama warned of a litany of dangers associated with direct military action — repeating his determination not to be drawn into another ground war in the Middle East.

Responding to calls to shut down Syria’s combat aircraft with American air power, Obama said “the fact of the matter is for example, 90 percent of the deaths that have taken place haven’t been because of air strikes by the Syrian air force.”

“Syrian Air Force isn’t particularly good. They can’t aim very well,” he said, adding that most of the action was taking place “on the ground.”

On a possible “humanitarian corridor” to safeguard civilians in areas controlled by the opposition, Obama said such a step would require bombing raids that could carry unintended consequences, including triggering more civilian deaths.

“Or if you set up a humanitarian corridor, are you in fact committed not only to stopping aircraft from going that corridor, but also missiles?

“And if so, does that mean that you then have to take out the armaments in Damascus and are you prepared then to bomb Damascus? And what happens if there’s civilian casualties?” he said in an interview recorded before he departed for a G8 summit in Northern Ireland.

In an unusual public comments by a president weighing military options, Obama said bombing also would carry the risk of inadvertently hitting a chemical weapons site, potentially unleashing lethal agents into the air.

Obama implied he was wary of supplying more advanced weapons to the rebels and rejected arguments from some lawmakers and commentators that such a move would turn the tide of the war.

He said “any notion that somehow we’re just a few, you know, anti-helicopter or tank weapons away from tipping in that direction I think is not being realistic analyzing the situation.”

He said some critics had proposed “we go in hot and heavy, no fly zones, setting up humanitarian corridors, and so forth” and that this supposedly offered “a simpler solution.”

Referring to meetings in the White House “Situation Room” with military officers, Obama said: “Unless you’ve been involved in those conversations, then it’s kind of hard for you to understand that the complexity of the situation and how we have to not rush into one more war in the Middle East.”

However, Obama said he also rejected any suggestion that the United States had no role to play.

Washington has “serious interests there and not only humanitarian interests,” he said.

“We can’t have the situation of ongoing chaos in a major country that borders a country like Jordan which in turn borders Israel.”

Obama made clear he opposed siding with the Sunnis in the Syrian conflict as some voices in the region have demanded, saying that would not serve American interests.

The US administration wanted to see a tolerant government in Syria that was “not sectarian,” he added.