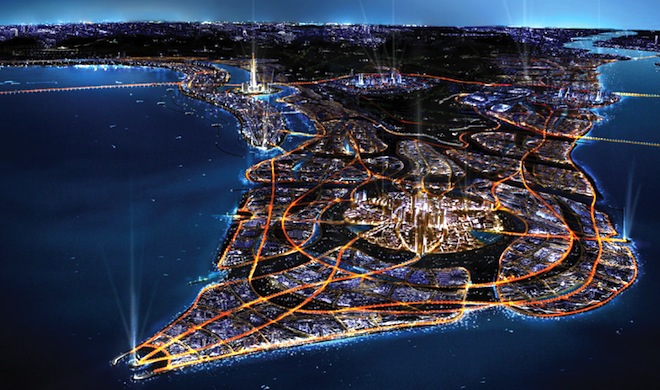 The éminence grise of contemporary Middle Eastern architecture is calling for the creation of “intelligent” buildings that are inspired by the wisdom of the ancestors, who worked with nature to survive the harsh desert climate.

Traditional Middle Eastern architecture evolved as an adaptation to cultural forces as well as a harsh environment: drifting sands, sparse dry hills, scant rain and hot desert winds. The materials used: mud brick, lime-plaster walls and baked floor tiles acted as natural insulators, absorbing heat and keeping interiors cool. One of the more ingenious adaptations to the desert environment was the badgir (wind tower), which captured passing breezes and channeled them downwards to cool lower rooms. The design of the homes was introverted, with rough, thick exterior walls that preserved privacy and protected against sand storms. The inside featured formal geometric patterns with a central courtyard and serene gardens that were laid out to maximize shade, helping maintain a temperate interior.

Modernist buildings, notes Nader Ardalan, the éminence grise of contemporary Middle Eastern architecture, rejected this vernacular. And with this deviation, something was lost, says the Iranian-born Senior Research Associate at Harvard University who has spent the past five decades practicing architecture in the Persian Gulf states, Iran, the Far East, Europe and North America. Up to the 1950s, Ardalan says, Persian Gulf architecture “related both to the environment and the cultural way of life.” However, awash in petrodollars since the Second World War, Arab nations erected iconic, lavish buildings that reflected the region’s seemingly boundless prosperity.

“It’s not just about getting a building to look better”

This petroleum wealth may have wrought “fantastic change and transformation,” but it also engendered a certain alienation, says the elegantly dressed 74-year-old in suit and gold brocade tie and large, round, black-framed glasses, who spoke to Your Middle East following his lecture, “Elements of a Transcendent Quest in Architecture: Nature, Culture and Spirituality in Architecture,” this month at the Museum of Anthropology (MOA) in Vancouver, Canada. Ardalan’s talk was part of the MOA’s Safar/Voyage, an exhibit of contemporary works by Arab, Iranian and Turkish artists.

The rampant development of the preceding few decades expressed a new “freedom,” but it was hubristic. “Particularly in the past 20 years, aberrations were built that were not sustainable,” says Ardalan, who focuses on designs that emphasize livability and sustainability in an urban setting. Many modern Middle East buildings today “have no indigenous soul,” he adds.

“They are immediate copies from Los Angeles and Las Vegas — alien implants from other cultures and climates. The countries that have the wealth in the Persian Gulf are seeking to buy brand names that don’t always have relevance to their environment or their culture. Glass buildings, lacking proper solar orientation or climatic protection, don’t relate to the environment and have difficulty with cultural relevance.”

As a result, the six Arabian Peninsula nations that makes up the Gulf Cooperation Council (GCC): Saudi Arabia, Kuwait, Bahrain, Qatar, United Arab Emirates and Oman, while enjoying “short-term financial and social advancements,” also gained an unenviable reputation for overconsumption. Together, the countries “have the highest carbon footprint in the world: the highest electrical use per capita, the highest water consumption and the highest waste production,” says Ardalan. Such excess has contributed to record-high levels of carbon dioxide (CO2) in the atmosphere, which is linked to greenhouse gases, a key factor in climate change.

With peak oil and climate change accelerating towards convergence, it is urgent that nations embrace a more holistic relationship with nature through architecture design — not only of homes but cities — to prevent future ecological disaster. “Man and nature — the right path. Man over nature — madness,” says Ardalan, whose designs include the Contemporary Museum of Art in Tehran, the Information Technology College at UAE University and The Intelligent Tower in Doha, Qatar, an elegant, slender, cutting-edge sustainable building that rises 60 storeys into the sky like a glittering shard of crystal.

Ardalan has embraced another important project called the Gulf Encyclopedia for Sustainable Urbanism (GESU), a groundbreaking, long-term study analyzing sustainable urbanism within the context of architecture and its relationship to the culture and environment of the Persian Gulf. Senior editor of the Qatar Foundation-funded project, Ardalan says that GESU is driven by the underlying concept that future urban growth should be holistically sustainable, inspired by the timeless, environmentally adaptive building principles of the past while anticipating the aspirations of the future.

It is imperative that the Middle East design new buildings to adapt to the demanding desert climate by looking to the vernacular, Ardalan says. An example of this is the experimental sustainable, renewable-energy city of Masdar outside Abu Dhabi. The streets are narrow to optimize shade, enhancing cooling. Rooftop solar panels will generate electricity and cars would be replaced by an underground, personal rapid transit system. Most of the water would be recycled. Interestingly, Ardalan designed a solar energy-based city in the late 1970s called Nuran, City of Illumination, which was to be built near the historic city of Isfahan in Iran. However, the 1979 Iranian Revolution halted any possibility of construction.

Ardalan is not calling for a return to the humble buildings of yesteryear. Rather, he is calling for the creation of “intelligent” buildings that are inspired by the wisdom of the ancestors, who worked with nature to survive the harsh desert climate. Ardalan has designed buildings using elements like the badgir wind tower, which capture breezes that replace the need for air conditioning — a massive consumer of electricity. The proposed City Center of Besat in southern Iran is one such example.

Future building designs could also draw inspiration from vernacular courtyards, which have solid walls on the west to block the menacing sun. Rather than smooth glass, which absorbs the heat, building exteriors would be made of high thermal mass materials like brick to enhance coolness, as exemplified by Ardalan’s Iran Center for Management Studies that housed the former Harvard Business School in Tehran.

“It’s not just about getting a building to look better,” says Ardalan. “It’s about human survival.”