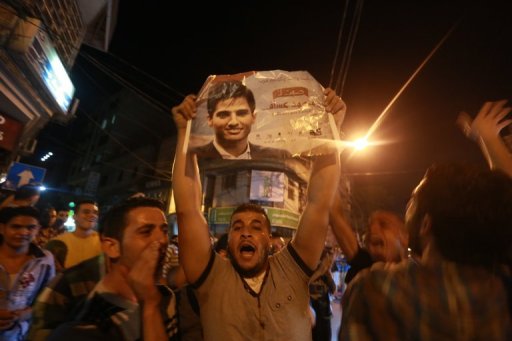 Jubilant Palestinians took to the streets in their thousands early Sunday after singer Mohammed Assaf won a pan-Arab singing contest that has had millions of viewers fixed to their TV screens since March.

Saturday’s televised victory was the first such success for a Palestinian entertainer and sparked an unprecedented response in the occupied territories.

Assaf, winner of the Arab Idol contest in Beirut, dedicated the win to “the Palestinian people, who have been suffering for more than 60 years from (Israeli) occupation”.

“Mohammed Assaf is the Arab Idol!” called out the presenter of the show, modelled on the Western Pop Idol contest, as coloured confetti rained down on the cheering audience.

Immediately after his win, Assaf was named Youth Ambassador for UNRWA, the UN’s agency for Palestinian refugees and named Palestinian goodwill ambassador by president Mahmud Abbas.

The handsome, tuxedo-clad Assaf, 23, won after weeks of anticipation from his army of followers, who had been glued to big screens in cafes and restaurants across Gaza and the occupied West Bank, listening as his powerful voice propelled him through the competition every weekend.

His mother, wearing a traditional Palestinian embroidered dress, wept as she wrapped the Palestinian black, green, white and red flag around her shoulders.

Spontaneous celebrations broke out in Gaza, Assaf’s home, and in the West Bank, with tens of thousands of people taking to the streets.

Huge posters of the Gazan singer have festooned the streets, the singer becoming a source of pride for Palestinians everywhere in recent months.

Each edition of the twice-weekly show, aired by the pan-Arab MBC channel in Beirut, has been followed with increasing anticipation, with social networks mobilising to boost the number of votes for their favoured candidate.

In the West Bank town of Ramallah the celebrations after the final results were announced spread to the tomb of former Palestinian leader Yasser Arafat.

“The mood is undescribable. Everyone is celebrating. Thank you, Mohammed Assaf, for bringing joy to our hearts. We haven’t felt this joy in a long time,” Gaza resident Mohammad Dahman told AFP via the Internet.

In northern Lebanon, Palestinian refugees in the Beddawi camp fired gunshots into the air and took to the streets, honking their car horns to celebrate Assaf’s win.

Across the southern city of Sidon, there were celebrations too, said an AFP journalist.

Born in Misrata, Libya, Assaf grew up in the overcrowded Khan Yunis refugee camp in the Gaza Strip, one of the world’s poorest and most densely-populated places where Israel severely restricts the movement of people, goods and financial aid.

The Islamist Hamas movement, which has controlled Gaza since 2007, disapproves of what it considers un-Islamic shows, such as Arab Idol, but has not officially clamped down on support for Arab Idol or Assaf.

In a previous episode of the programme, popular Lebanese singer and jury member Ragheb Alama had described Assaf as “the best rocket” to have come out of Gaza, and as “a rocket of peace, not war”.

Announcing Assaf’s nomination as regional ambassador for youth minutes after his win, the agency’s chief Filippo Grandi said: “All Palestinians share in his success. Mohammed’s music is a universal language and speaks to all of us. How fantastic that a Palestine refugee from Gaza should bring us all together in this way.”

On the Israeli side, army spokesman Avichai Adraee congratulated the young Palestinian singer in a tweet in Arabic.

Israel imposed a land, sea and air blockade on Gaza in 2006 after militants there seized an Israeli soldier.

It was further tightened in mid-2007 when the Islamist Hamas movement took control of Gaza, then eased somewhat following the international outcry after Israel’s botched raid on a humanitarian flotilla bound the enclave.