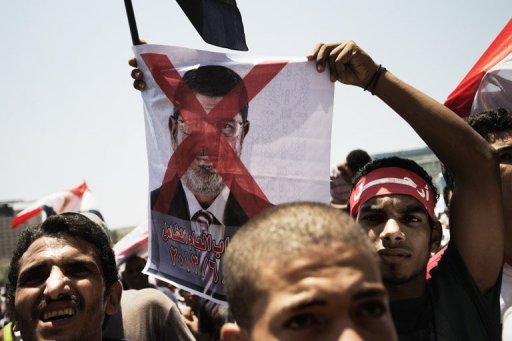 Egypt braced for protests against Islamist President Mohamed Morsi on Sunday, the anniversary of his turbulent first year in office, after a week of violence that has killed eight people, including an American.

US President Barack Obama expressed concern at the mounting violence and urged Morsi to be “constructive” with the opposition.

The grassroots movement Tamarod — Arabic for rebellion — said it has gathered an unverified 22 million signatures of Egyptians who want Morsi to resign and snap elections held.

The group has called on Egyptians to take to the streets on Sunday across the Arab world’s most populous nation to vent their rage against Morsi.

At least eight deputies resigned on Saturday from the acting parliament to support Egyptians against Morsi.

The army, which has stayed aloof from politics since Morsi was elected a year ago, has warned it will intervene if there is major unrest.

Speaking in South Africa, Obama said: “We would urge all parties to make sure they are not engaging in violence and that police and military are showing appropriate restraint.

“Everybody has to denounce violence. We would like to see the opposition and President Morsi engage in a more constructive conversation about (how) to move their country forward.”

Andrew Pochter, 21, an American intern with US cultural and educational group AMIDEAST, was killed as he photographed clashes in the Mediterranean city of Alexandria, officials said.

Seven other people were killed this week including an Egyptian journalist in the restive Suez Canal city of Port Said by an explosive device thrown at anti-Morsi protesters, a security official and witnesses said.

Scores have also been wounded across Egypt as Morsi supporters challenged his opponents ahead of Sunday’s rallies.

The offices of the Freedom and Justice Party, the political arm of Morsi’s Muslim Brotherhood, were torched in Alexandria and at Aga in Daqahliya.

The MPs who announced their resignation on Saturday said they were quitting to support the people.

“We resigned in support of 22 million Egyptians who withdrew their confidence from Morsi,” Ihab al-Kharatt, who heads the human rights council at the Shura Council, told AFP.

Washington warned Americans against travel to Egypt as antagonism intensifies between Morsi’s supporters and the opposition, which accuses him of betraying the 2011 revolution that ousted Hosni Mubarak.

Britain urged its citizens to “avoid all demonstrations and large gatherings,” while France said citizens should “limit movements to those strictly necessary”.

Morsi’s opponents, a collection of leftists, liberals, Christians and also deeply religious Muslims, accuse him of hijacking the revolution and concentrating power in Islamist hands.

Their call for Sunday’s protests prompted pre-emptive demonstrations on Friday by the Brotherhood and its Islamist allies.

By Saturday, rival demonstrators had pitched tents and begun preparing for the long haul.

Morsi supporters spent the night outside the Rabaa Al-Adawiya mosque in Cairo’s Nasr City neighbourhood, where tens of thousands gathered on Friday to defend the legitimacy of Egypt’s first freely elected president.

“It’s not just about Morsi, it’s about legitimacy and the state. We can’t go backwards,” said protester Kamal Ahmed Kamel.

Others called on the opposition to invest their energy in the political process.

“If it is that big tomorrow, why can’t they use the ballot box and participate in parliamentary elections and get rid of Morsi that way?” Kamel asked.

In Tahrir Square, epicentre of the 2011 uprising, opponents also camped out and erected a large stage in preparation for what they call a “second revolution”.

Some activists say they want Egypt governed by a presidential council and a national unity government.

“The Islamists have been in power for a year and they proved they failed at running the country,” said one, Adel al-Amir.

Newspapers underlined the deep divisions in the Arab world’s most populous nation.

Morsi warned in a televised speech on Wednesday that the growing polarisation threatened to “paralyse” Egypt, and appealed to the opposition to talk.

The opposition National Salvation Front coalition spurned his offer and renewed its demand for an election.

Senior Brotherhood leader Mohamed al-Beltagui told a mass rally in Cairo on Friday his movement “will not allow a coup against the president” which the opposition says it is determined to evict.