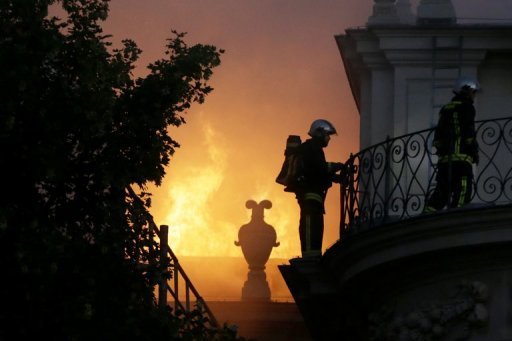 The Hotel Lambert mansion was bought by the Qatari royal family in 2007 and was undergoing controversial renovations.

Fire department sources told AFP they believed the blaze was accidental and connected with the renovations.

The blaze at the mansion located on the Ile Saint-Louis overlooking the river Seine broke out around 1:30am (2330 GMT Tuesday) and spread quickly, fire officials said.

Murals, paintings and frescoes, including some by celebrated French painter Charles Le Brun succumbed to the flames.

Culture Minister Aurelie Filippetti visited the scene saying afterwards that the fire had “caused very serious damage to an essential part of Paris’s heritage, some of which is irreversible.”

Dozens of firefighters fought the blaze for some six hours.

It was believed to have started on the roof of the UNESCO-listed mansion.

The fire “spread pretty fast because the building is empty and in the midst of renovation”, fire service Lieutenant-Colonel Pascal Le Testu told AFP.

“The operation was complicated because the structure is fragile,” he said.

Le Testu said the damage appeared to be extensive.

“The roof was completely devastated and the structure is weakened,” due to the collapse of a staircase and other parts of the building, he said.

He said the building’s famed frescoes by Le Brun in the “Gallery of Hercules” were also “severely damaged by smoke and water”.

Filippetti said the “Cabinet des Bains” — a series of murals and frescoes painted by Eustache Le Sueur — had also been completely destroyed.

She said the cause of the fire had not yet been determined and that police were investigating.

Filippetti said the Qatari royal family had already been in touch with the government and city of Paris to promise to do “everything possible to restore this magnificent part of Paris’s heritage”.

Around a dozen neighbours were evacuated and one firefighter was slightly injured.

Built in the 1640s at the eastern tip of Ile Saint-Louis, the mansion was designed for a wealthy financier, Nicolas Lambert, by the architect Louis Vau, who went on to oversee an expansion of the Chateau de Versailles for Louis XIV.

The mansion is considered one of the finest examples of mid-17th-century French architecture, featuring frescoes by Le Brun and other masters of the day.

Over the years the mansion played home to many illustrious figures including the 18th-century philosopher Voltaire who used it as a love nest. It was also used as a political headquarters for Polish exiles in the following century.

Its acquisition by the Qatari royal family, which enjoys strong diplomatic ties with France, sparked a dispute as heritage campaigners feared they would destroy a cultural gem.

Plans for large-scale renovations, including the installation of a parking area and vehicle lift, were initially blocked by a French court following complaints from activists and neighbours.

Qatar’s royal family took over the building in 2007 from the Rothschild banking dynasty for some 60 million euros ($85 million).

Supporters of the Qatari family’s plans said the mansion had been neglected and damaged over the centuries and was in desperate need of repairs.

Some also suggested the criticism was rooted in opposition to seeing foreigners buy exclusive properties in rarefied central Paris.

The dispute was finally resolved in January 2010 when an agreement was signed with a heritage association after weeks of delicate government-supervised negotiations.

The French foreign ministry estimates that Qatar has invested at least $15 billion (12 billion euros) in France over the last five years.