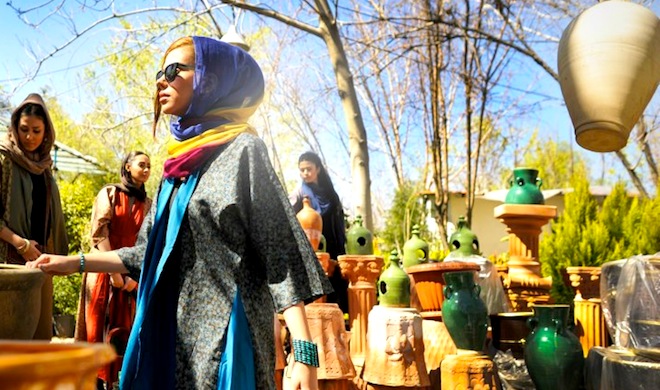 A new kind of revolution seems to be taking place in the streets of Tehran. There are no displays of political banners, thrusting of fists in the air or chanting of slogans; only tossing of headscarves, colorful flower-pattern fabrics and fancy jewelry.

The main streets and squares have ceded their pivotal role to designer shops and boutiques, and the power of the masses has made way for that of individuality and personal choice. Garment by garment, bracelet by bracelet, the women of Iran are slowly revolutionizing the fashion industry.

With the establishment of the Islamic Republic in 1979, Iranian women, who up until then had been able to choose their clothes to suit their tastes and needs, saw their room for choice being drastically narrowed by a regime that deemed appropriate – and legal – only two pieces of clothing: the chador, or “superior hijab,” and the manteau, an overcoat which was supposed to conceal a woman’s body shape.

Not surprisingly, most women opted for the manteau, which can be considered the lesser of two evils when it comes to looks and comfort. The years passed, and although designers and dressmakers presented the people with light variations on the theme that would be easier on the eyes, this trend remained confined to a mostly rich upper class clientele.

But since April 2012, a new star has risen in the firmament of Iranian design, as the graphic designer Farnaz Abdoli launched her new line of female clothes – to which she has recently added a male collection – called Poosh, the old Persian word for cloth. What sets Abdoli and her brand apart within the fashion scene is the fact that she has gone so far in revisiting the concept of the manteau that her garments cannot even be called manteau anymore. She had to coin the expression “street clothes” in order to find a proper definition. On the other hand, though, to the innovative and various colors, cuts, and fabrics correspond a deep awareness of what is wearable and permissible and a strong attention to sleeves’ and shirts’ length, as well as to collars’ width.

As stated on Poosh‘s Facebook page, gaining more than 40.000 likes, “fashion is an art of personal self-expression,” and this is exactly what its collections do: they enable women to express themselves by accommodating their layered identity. Far from responding to clear-cut labels and stereotypes, Iranian women, like women all over the world, situate themselves on a wide spectrum ranging from religious to secular, conservative to liberal, traditional to modern. Poosh gives them a chance to pick a style able to express all these aspects at once, reconciling identities that could otherwise be in conflict.

In an interview with Azadeh Moaveni for IranWire, Abdouli describes how women walking into her shops in Tehran seemed to be worried about drawing too much attention to themselves by wearing her clothes, and would glance at other customers and what they were buying before making their choice. But “slowly (as) people realized they could wear it without trouble, a sort of collective courage emerged,” she says.

What is most remarkable about this is that what we see unfolding before our eyes is not the umpteenth instance of what is known as “colonial feminism,” of Western women – or Western-educated women – imposing Western standards on their peers in the Middle East. Poosh is a line initiated and designed by an Iranian woman for Iranian women, which pays careful attention to Iranian standards.

After having graduated in Graphic design from the Saryian Higher Education Institute in Sari, a town on the Iranian coast of the Caspian Sea, Abdoli decided not to seek fortune on the catwalks of Paris and Milan, and instead took the challenge of hitting the Iranian market, creating a line of “hassle-free” clothes to be worn by Iranian women in their everyday life.

Though Poosh, created not much longer than one year ago, still has a long way to go before reaching its goal, this could sure be the beginning of a broader trend, and one which we might all want to keep an eye on.