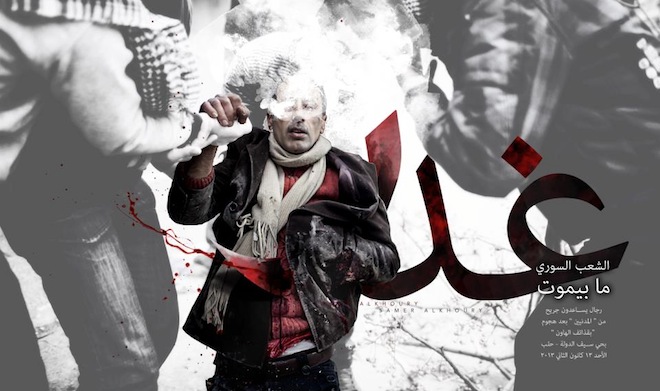 Julian Phillips explores three media that grapple with the central question faced by Syrian art in a time of war: the relative value of aesthetics and politics. He also questions the notion that Assad rule arrested aesthetic experimentation.

The past three years of peaceful protest and brutal civil war have generated an efflorescence of cultural production among Syria’s artists. Formally educated painters, musicians, and directors have joined with activist amateurs to document the political mobilization and violence that dominates the country. The resulting works have been both didactic and subtle, and often deeply moving.

With hundreds of works appearing online every week, curators and scholars have struggled to capture the creative zeitgeist of revolutionary Syria. Of the many Facebook feeds, exhibitions, and articles devoted to the subject, three stand out. Since early 2011, the website Creative Memory of the Syrian Revolution has uploaded nearly 1,000 items to an online archive of revolutionary art. Since its inception in June 2011, the Facebook page al-Fann wa al-Huriyya has showcased hundreds of paintings, drawings, and digital graphics based on the situation in the country. And in January 2013, Éditions de la Martinière released the first book-length study of Syria’s revolutionary art, Syrie: l’art en armes.

Each of these three sources grapples with the central question faced by Syrian art in a time of war: the relative value of aesthetics and politics. Is a work of art valuable for its formal sophistication and aesthetic merit, or for its political and emotional message? In selecting works for spotlight, the curators of Creative Memory, al-Fann wa al-Huriyya, and Syrie: l’art en armes reveal distinct perspectives on the intersection of art and politics.

Creative Memory of the Syrian Revolution describes itself as an “online archive” intended “to gather and spread the messages expressed by the different artworks and other cultural productions and to help Syria’s artistic resistance… create networks among themselves and connect to the outside world.” The site subscribes to a broad definition of “artworks and cultural productions.” In addition to archives of revolution-inspired painting, sculpture, and music, the site includes sections devoted to street protests and banners, graffiti and murals, and digital posters linked to particular political campaigns.

Thematically, the works aggregated on Creative Memory range from subtle to didactic. One of the first drawings posted on the site, Youssef Abdelké’s 2011 “Butterfly and Knife,” shows a delicate butterfly fluttering precariously at the edge of a blade. An inoffensive allusion to the threat to Syrian unity posed by the conflict, the work contrasts strongly with Ayham Jomaa’s 2013 drawing, “Revolutionary Court.” In a visual manifestation of the violent excesses of certain segments of the Syrian opposition, the work shows three bodies hanging from a shadowy gallows with the labels “regime militiaman,” “taking advantage of the revolution,” and “stealing from the revolution.”

MORE BY JULIAN Documentaries highlight life in the Golan

Subtlety does not necessarily protect artists from regime scrutiny. This week, Abdelké and two friends were arrested at a government checkpoint outside of the city of Tartous, the Syrian Center for Media and Freedom of Expression reported. No formal charges have been publicized, but Al-Akhbar hypothesized that Abdelké was targeted for signing a recent petition in support of the uprising.

Al-Fann wa al-Huriyya calls for artists from Syria and across the Arab world to submit artworks “in solidarity with the Syrian people, with liberty, against violence.” The site spotlights paintings, drawings, sculptures and digital posters, with a smattering of videos and installations. Unlike Creative Memory, it also endorses specific political campaigns, such as the defense of the Syrian cartoonist Ali Farzat. (Farzat, whose satirical images included veiled criticisms of Bashar al-Assad, fled Syria in 2011 after unknown assailants broke his hands in a Damascus street attack.)

The dominant themes of al-Fann wa al-Huriyya have shifted over the site’s two year existence. Early posts spotlighted the work of commercial artists like Tammam Azam and Youssef Abdelké, whose allusions to the Syrian uprising were restrained. As the conflict continued, however, the page has uploaded increasing numbers of works with didactic references to al-Assad and the Free Syrian Army (FSA). Blood, dead bodies, and suffering children have emerged as thematic tropes. In many instances, the dramatic content of a work has overshadowed its formal characteristics.

Unlike the two sites, Syrie: l’art en armes is carefully curated to avoid offending western aesthetic and political sensibilities. The book begins with a series of images of pre-revolutionary regime propaganda, including a large banner that melds an image of Bashar al-Assad with the written declaration “we love you.” The central section showcases 19 Syrian artists, selected by French curator Delphine Leccas. Leccas, who lived in Damascus until 2011, culled through 18 months of Facebook posts to select images that, in an implicit contrast to the regime propaganda, are formally sophisticated and politically vague.

Many of the works in Syrie: l’art en armes were generated by anonymous artists or collectives, such as a series of fictional memorial stamps produced by a post-Assad government and a set of posters calling for Syrians to attend street rallies. Others were produced by professional artists like Tammam Azam and Akram al Halabi. Leccas avoids images with explicit references to the FSA or al-Assad, or with Christian or Islamic imagery. Although a number of works include violent imagery such as tanks or bullet holes, the artists do not explicitly assign blame to the al-Assad regime.

In erudite introductions to their collections, the curators of Creative Memory and Syrie: l’art en armes identify the Syrian uprising as a trigger for aesthetic exploration and increased creativity among the country’s artists. The curators of Creative Memory declare, “The revolution established a space for ingenuity that has astounded us… we wonder, where had all this talent in satire, art, and innovation been?” Leccas writes, “The experience of civil war paradoxically offers an unimagined freedom of creation for artists. It constitutes a moment of rupture that bursts through the limits imposed by the academics of neo-colonial art institutions, the conformity of the local art market, government censorship, and the conservative morals of society.”

This argument is overly simplistic. The decades of uncontested al-Assad family rule did not arrest aesthetic experimentation among Syria’s artists. Nor did the regime prevent artists from expressing dissenting political viewpoints, albeit in subtle ways. ‘Umar Amiralay’s 2003 film A Flood in the Ba’ath Country presents a sophisticated critique of the al-Assad regime. By filming Syrian civilians reciting scripted Ba’athist propaganda, Amiralay masterfully questions political repression in rural society without overtly criticising the government.

The curators of Creative Memory of the Syrian Revolution, al-Fann wa al-Huriyya, and Syrie: l’art en armes minimize the serious risks that the ongoing civil war poses for Syria’s artists. Leccas’s celebration of the breakdown of “neo-colonial art institutes,” “the local art market,” and “conservative… society” ignores the essential role that these institutions play in supporting art production. The conflict has ruptured Syria’s networks of cultural and aesthetic exchange by displacing thousands of artists. Facebook pages and occasional group exhibitions do not substitute for geographic proximity, consistent institutional and familial support, and daily interaction with Syria’s physical and social landscape.

These three compilations of Syrian revolutionary art document the last wave of production by Syria’s antebellum art scene. The country faces an extended period of war, severe poverty, and a mass exodus of intellectuals. The recent flowering of the arts is temporary: Syria’s cultural scene will require years to regain its former strength.