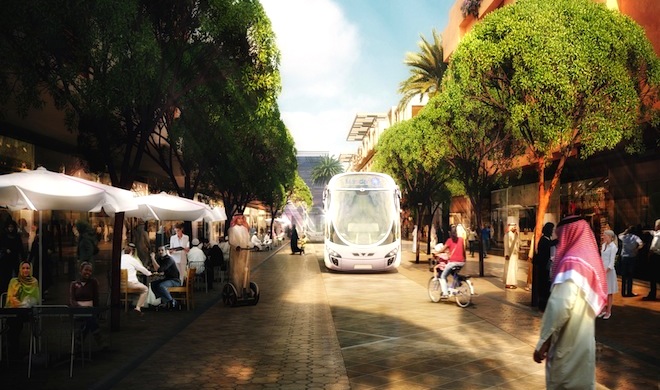 Peer pressure. As the ultra-rich Emirates launch multi-billion-dollar investments in everything from solar panels to wind power, others have little choice but to follow. We are seeing a fundamental shift in the relationship between society, environment, and markets across the region, writes Bassam Aoun.

Authorities in the Middle East have begun to acknowledge the region’s sizable carbon footprint, most evidently in per capita terms (see infographic below). Energy production accounts for the majority of carbon emissions in the Arab world. Consequently, the use of coal, petrochemicals and other environmentally noxious inputs has contributed to the overall deterioration of the area’s atmospheric health. Acknowledging this situation, oil-exporting nations – who are responsible for over a third of carbon emissions from electricity generation alone – have begun dedicating a significant portion of their public spending and sovereign wealth funds to financing green power initiatives.

Policymakers and business executives alike have recognized the valuable returns that can be derived from the use of natural resources for sustainable power. Solar power has emerged as the preferred avenue in this regard. The Middle East, with its abundant sunshine throughout the year, assumes a comparative advantage relative to other societies. The presence of such a pervasive and easily accessible resource has prospectively lowered the long-term costs of investing in solar power projects, thus allowing the benefits to shine.

Economists had predicted this trend long before governments and investors

Firms in the private sector benefit from potentially lower operational expenses, but more importantly, are relieved of the sociopolitical pressures associated with this increasingly controversial topic. The intransigence from companies and industrial markets is not only attributed to the monetary investments that have to be made, but in the opportunity cost from potentially dampened productivity as well. Ultimately, in the battle between advocates of efficiency and those of equity, firms in the Middle East are beginning to realize that switching to a substitute input rather than facing a market distortion from a public tax on emissions may be more cost-friendly in the long run.

Green energy has therefore grasped the attention of numerous Arab economies, with ambitious projects sprouting up in several nations, the majority of which are heavily backed by their respective public authorities. Financial returns from these endeavors may be of the least concern to these governments; an improvement in the state of public health, decreased pressure from the international community, and longer-lasting momentum in some emerging economies’ outputs only begin to illustrate the positives of funding the green sector.

The United Arab Emirates arguably took the first step in this regard, with their version of “the city of the future.” Masdar, or “source,” is quite the appropriate name for the green town. Rather than taking an ex-post stance on solving the problem of carbon emissions with reduction efforts, the architects of the city set their sights on the root of the problem. The plan is to make Masdar City the world’s most carbon-neutral residential and business area by relying solely on solar power, in addition to other forms of renewable energy. At capacity, the development will be able to house 40,000 residents in a comfortable living environment, as well as a top-tier graduate university affiliated with the Massachusetts Institute of Technology. At an estimated price tag of $19 billion, the endeavor will cost Sheikh Khalifa bin Zayed Al Nahyan over $3 billion per square kilometer, or $475,000 per resident.

The overall success of Masdar’s renewable energy efforts has manifested in the heightened regional activity it sparked in the green sector, resulting in unprecedented levels of capital inflow into renewable energy projects across the Middle East. By indirectly signaling to its neighbors that the UAE is planning to invest enthusiastically in green technology, others soon began to follow suit. As such, the Masdar impact is not solely limited to a property development – it also represents a shift in the relationship between society, the environment, and the market.

Saudi Arabia, the world’s leading oil exporter, has announced its plans to develop the most far-reaching clean energy project on the planet. The project will be headed by the King Abdullah City for Atomic and Renewable Energy (KA-CARE) and powered by the Kingdom’s other abundant natural resource: sunlight. With a set completion date in 2032, the Saudis plan to power one third of their grid via solar energy. The project will cost an industry-high $109 billion and boasts a solar capacity of approximately 41,000 megawatts. As of recent estimates, the Kingdom currently has about 3 megawatts of solar power, one of the lowest capacities in the region.

Economic returns are projected to be one of the more lucrative aspects of this investment – sources predict that it will lead to the creation of over 2 million new jobs over its lifetime. Even in light of this fact, the reduction in Saudi Arabia’s carbon footprint will still be this project’s crowning achievement. Preliminary estimates have revealed that the use of the solar panels is expected to offset almost 44 million tons of carbon dioxide emissions, which for Saudi Arabia is the equivalent of 10 million less cars on the road.

Beneficiaries include the solar panel industry, future generations of citizens and even the oil sector. When implemented, the solar panel project will save approximately 523,000 barrels of oil per day over the next 20 years. By increasing the supply of the commodity available for export, oil reserves will be further replenished and price shocks can be better absorbed. KA-CARE representatives have emphasized that the solar panels are only a segment of their larger vision for a self-sufficient power network in Saudi Arabia. Other facets include wind power as well as geothermal energy. Solar panel manufacturers, then, are not the only suppliers set to gain access to an enormous market in Saudi Arabia. The exact potential capacity of solar power in the Kingdom is still being surveyed to this day.

Solar panels are only a segment of their larger vision

Another program of a similar nature has been gaining increased attention in Kuwait, where ruling authorities are planning to power 15% of the nation’s grid with non-oil sources by 2030. Bids to construct Shagaya, Kuwait’s renewable energy park, are currently being accepted by the government. It is expected to generate approximately 2000 megawatts of renewable energy by 2030. Kuwait has previously mulled over making a substantial investment in green energy, yet due to the abundant and affordable amount of oil and stark dependence on oil-burning power plants, these plans were tabled until recently. Although not of the same weight as the projects in the UAE and Saudi Arabia, this venture is indicative of a recalibration in investment policies and incentives in the market.

Ultimately, the green sector is on the rise, and economists had predicted this trend long before governments and investors noticed its profitability. The expansion of a generic economy’s production capacity becomes more challenging as its finite resources are expended. In light of this, the Middle East is beginning to realize that if it overwhelmingly depends on a single resource for growth and revenue, then sustainability will also come into question. By channeling revenues into industries that will aid the private sector and develop its liquidity, public authorities will not only aid the environment and alleviate the oil economy, but will also provide favorable investment opportunities for local investors and entrepreneurs alike.

This is the first article in a Your Middle East series focusing on the regional investment climate.