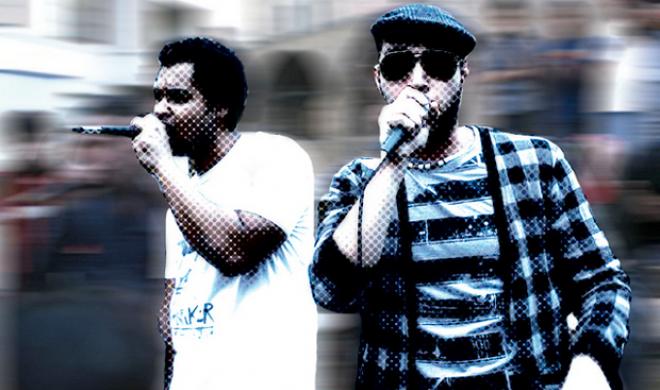 Hip-hop may have been born and raised in the Bronx, but its influence extends far beyond the limits of New York. In the Middle East and North Africa, rap is an accessible and well-established platform for political protest and artistic expression.

It makes perfect sense that hip-hop would take root and flourish in the underground Arab music scene. With its rhyme-based lyrical style and loud politics, the genre fits perfectly into the legacy of poetry, protest, and political consciousness existing across the Middle East and North Africa.

As Nouri Gana writes in Rap and Revolt in the Arab World, “it is not so farfetched to imagine that rap music could have originated in Arab culture” itself. “Islamic and pre-Islamic Arab culture boasts a robust poetic and oral tradition” and the Arabic language seems practically designed for writing in rhymes.

“It would be irrelevant to sing about cars or parties”

You see this in Ibn Thabit, Libya’s leading (now retired) MC whose alias stems from that of the Prophet Muhammad’s favorite poet. You see it in Lebanese rapper El Rass, who explains it best when he tells the LA Times: “Arabs first wrote poetry, not prose. (Reciting) the Qur’an is also close to what we (as rappers) do.”

Of course, Islam and the Arabic language have also played a considerable role in the history of hip-hop’s pioneers farther west. Since 1973 when Afrika Bambaataa founded the Zulu Nation in the Bronx, Islamic themes and Arabic phrases have pervaded rap culture and established Islam as the official religion of hip-hop. The cultural exchange goes both ways.

The most striking feature of Arab rap, though, is that it has managed to preserve the spirit of subversion so central to the hip-hop genre as a whole. From its inception, rap has been a means of powerful political expression for the socially, politically, and economically marginalized. This was true for African American artists when the genre emerged in the 1970s and ‘80s, and it continues to be true for artists in Palestine, Egypt, Tunisia, Lebanon, and other countries across the region.

In an interview with Ahram Online, a member of the Egyptian hip-hop trio Wara2a b-100 (100 Egyptian Pound Bank Note) explains that “it would be irrelevant to sing about cars or parties” in the midst of the political unrest he and the rest of the country find themselves in. To rapper Shadia Mansour, a South Londoner by way of Palestine, hip-hop is the only weapon left. “If you are not facing guns,” she warns, “you will be facing artists armed with mics.”

This seems to be the mentality of artists all across the region.

Palestinian rap group DAM, for one, helped popularize Arab rap in 2001 with its single “Meen Erhabi?” (“Who’s the Terrorist?”), a song that challenged the quintessential narrative surrounding Israeli violence against Palestinians.

ALSO READ A voice for peace in war-torn Tripoli

Ten years later, Hamada Ben Amor (El Général) helped spark the Tunisian revolution when he wrote and released two anti-regime songs that went viral, sowing protest in the hearts of youth across the country. One of those songs, “Rais Lebled” (“Head of State”), went on to become the anthem for both the Tunisian and Egyptian revolutions.

And, earlier this year, a group of twelve rappers, five producers, two turntablists, and five instrumentalists released Khat Thaleth—the first compilation ever of its kind. The album represented eight countries across the Arab World with lyrics inspired and enraged by the events of the Arab uprisings.

The work of Arab MCs is part and parcel of one unified hip-hop tradition—a global revolt against structural injustice. In the words of Syrian-American rapper Omar Offendum:

“Hip-hop culture gives us an opportunity to look past the borders that separate us and the nationalities that supposedly define us and focus on the real connections we have with one another.”

In the viral hit “#Jan25,” released in 2011 in solidarity with revolutionaries across the region, he raps what can only be universal:

Freedom isn’t given by oppressorsâ¨
It’s demanded by oppressed â¨
Freedom lovers – Freedom fightersâ¨
Free to gather and protestâ¨
for their God-given rightsâ¨
for a Freedom of the Pressâ¨
we know Freedom is the answer â¨
The only question is… â¨
Who’s next?

The themes of hip-hop know no borders.