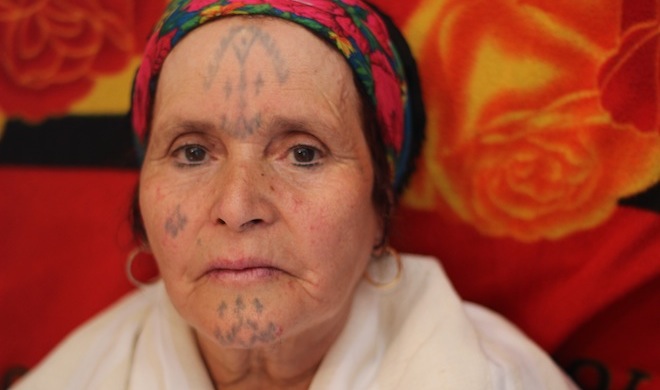 A fading tradition, now only carried by the elder generation of women in the Aurès Mountains district, Yasmin Bendaas visited the region to search for the meaning behind the ancient Algerian tattoo ritual.

When I interviewed Masouda Ibrahimi last summer she was 78 years old. Sitting in her home in El-Madher, Algeria, she tried to recollect what she could of the tattoos still visible on her face.  She received the tattoos at the age of five, but she does not even know their names.

Because Masouda spoke only the indigenous Chaouia language, I was accompanied to the interview by two translators. Yet, information wasn’t lost in translation. It simply faded, just as the tradition. Carried now only by the eldest generation of women in the Aurès Mountain region, the tattooing tradition will no longer be seen on either Arab or indigenous women in the near future.

The lack of knowledge about tattoo meanings indicates that perhaps the tradition was fading well before today’s elders were tattooed in the 1930s and 1940s. In addition, because symbols were often not of the woman’s choosing but rather in the hands of the person giving the tattoos, my search for meaning resided not with the tattooed but with the tattooer, and I couldn’t help but feel I was too late.

Due to a lack of doctors, tattoos often related to healing

Masouda, like many women I interviewed, received her tattoos from a traveling female gypsy called an adasiya. Many speculated these gypsies came from within Algeria – from the Sahara, from Sidi Aysa, or from Oran. Others were positive the tattooist hailed from Tunisia.

The disappearance of the adasiya is one of the main reasons given for the disappearance of the tattooing tradition as a whole (with the foremost reason being the prohibition of tattoos in Islam). I learned that the Algerian government had taken steps in the 1990s to discourage gypsies from living in the country, and I was told it would be incredibly difficult to find any at all. It is also unclear how many tattooists remain alive, as they would be even older than the women I interviewed, who aged between seventy and ninety.

Although I was unable to find an adasiya during my time in Algeria, it is certain that this person would have great insight into the meaning of these tattoos. In descriptions of the gypsies, interviewees noted the adasiya was Arab-speaking, which is likely why names of the tattoos are recalled in Arabic as opposed to Chaouia. Masouda’s husband remembered the adasiya as a woman who traveled by donkey with her hair tied up in two knots on the sides of her head. She knocked on doors and often accepted flour, eggs, and shoes in place of money for her services.

ALSO READ Algeria: the future looks bright… or does it?

Providing a rare, male perspective to my interviews, Masouda’s husband added that in his time men desired women with tattoos. In fact, men wouldn’t even look at a woman without tattoos. Traditional facial tattoos served as markers of beauty. As men did not receive these ornamental tattoos, there is a gender identity aspect as well, tying facial tattoos to beauty via femininity and womanhood. Several women interviewed remarked with pride that “a woman without tattoos is not a woman.”

Though it is unclear how each particular symbol signifies beauty, symbols show a strong correlation with placement. For example, if a sun symbol is present, it is placed on the cheek. Other symbols found commonly on the face include ain hijla (eye of a partridge), cinsla (chain) and thabanat (flies).

Ain hijla is derived from the diamond shape around a partridge’s face and Margaret Courtney Clarke’s description of the partridge symbol in weaving supports an argument for the symbol’s significance of beauty. She writes, “In Berber culture, the partridge is considered a bird of great grace and beauty, and is thus associated with the qualities of a good wife. Its sharp eyes are also thought to be vigilant watchers against danger.”

Yet, perhaps most striking to me during the course of my research was the number of symbols that seemed representative of a strong man. The symbol for burnous, a soldier’s coat made of animal skin, is often found on the forehead and is a masculine symbol. Rikab, or horse stirrups, are related to horsemen. While all symbols represent key aspects of the culture of the Aurès, if the tattoos are telling a story, it seems likely this story is about a soldier or powerful man.

In examining the significance of symbols, it is important to note that facial tattoos are not the only tattoos a woman may have. Tattoos with placement on other parts of the body take on a whole new meaning.  Those on the breast, the back of the hand, or above the ankle promoted fertility and child health. Several had their entire forearm tattooed, and it was often filled with more literal symbols: scorpions, gazelles, camels, and watches.

One woman, Yamina, explained the bar tattooed across her wrist healed a source of pain. While tattoos for healing purposes were common, Yamina’s tattoo was particularly unique because it was made by a murderer and his knife. The practice of receiving a tattoo from a murderer is noted by Maarten Hesselt Van Dinter who writes, “The Ouled Abderrahman, a Shawiya tribe of the Aurès Plains, preferred to have tattoos applied with a murderer’s knife, and if possible, by the murderer himself.”

Though I am unsure that Yamina, who is from M’lila, is of the same clan Van Dinter refers to, she is the only indigenous interviewee to receive a healing tattoo from a murderer, and it is possible that healing the pain of others was a murderer’s form of penance.

Whether on the face or body, traditional tattoos remained integral to the beliefs, environment, and needs of the time period. Although answers to symbolic meaning may be less concrete, the significance of the tattoos and the role they played in the lives of tattooed women is evident.

Due to a lack of doctors, tattoos often related to healing, fertility, and childbearing. And while today modern beauty may be attained through make-up and Botox, once-upon-a-time for women in the Aurès their tattoos permanently encapsulated beauty on their faces and gave them the sense of being a true woman.

The arrow (>) pattern across the top of Arjona’s arm is called rikab, or horse stirrups.  I came across some old horse stirrups in a cultural center in El-Madher.

The name and significance of Yamina’s tattoo remains unknown to her. With a series of dots arching over her eyebrows, the tattoo is unique in Chemora and the surrounding villages.

Chaouia Masouda Ibrahimi with her husband in her home in El-Madher, Algeria. Masouda was one of few interviewees to only speak the indigenous Chaouia. Many in the AureÌs Mountain region also speak the local dialect of Arabic.