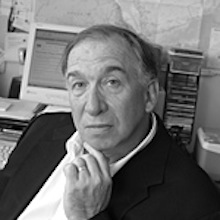 Daniel Kurtzer and Gilead Sher have co-authored in LA Times an essay subtitled “It’s hard to resolve Israeli-Palestinian disagreements without the U.S. defining a path.”

You know what’s driving me nuts about this entire enterprise? The fact that they’re absolutely right, but also that there’s no way the US can (or rather, will) do that at this point. Why?  Because, at the very least, if this “peace process” is to have any chance to succeed, Israel has to stop – COMPLETELY – its ongoing colonization of the West Bank and East Jerusalem. (And in a truly just and righteous world – a world that actually abided by…what do you call it? Oh, yeah, international law – it would also uproot every Jewish settlement, including the massive settlements blocs, from the West Bank and bring all those settlers inside the 1967 borders. But let’s not go any farther down that path right now.)

But there’s no way Kerry/Obama can insist on halting the settlement/colonization enterprise, because they know that the Republican-dominated House of Representatives – as well as a large portion of the US Senate – would stand by it. Remember, this is the same US Congress that only a few years ago practically led Netanyahu into its august halls on the back of a donkey and strewing palm fronds and hosannas in his path. And the Israel lobby, AIPAC, CUFI, the Washington Post editorial board, the Council on Foreign Relations (well, Elliott Abrams for sure) would scream bloody murderer and label Obama, Kerry, et al. anti-Semites, mullah-lovers, new-Holocaust mongers . . . any and every of the multitude of awful names and characterizations that people have come up with for people perceived not to “stand with Israel.”

Kerry’s peace talks are a charade

And this, despite the fact that many of Israel’s leaders – perhaps even Bibi himself – recognize that without the creation of a viable, prosperous Palestinian state, Israel itself has no chance of remaining a truly democratic, Jewish-majority unless it either simply forces West Bank Palestinian Arabs into apartheid status or else forcibly expels them.

The White House is facing a GOP-controlled House of Representatives whose members (especially those of the Tea Party extreme) nurture almost exuberantly an entrenched hatred of the president and the person that is Barack Hussein Obama, who must deal with their opposition – and must try to find a way forward – on issues ranging from health care, to immigration, to combating climate change.  Obama is not about to wave before their eyes the new matador’s cape that a demand for complete stop to Israel’s creeping annexation of the West Bank would be.

As part of his legacy, Obama will be able to say years from now that at least, via his secretary of state, he “tried” to resolve the Israeli-Palestinian conflict. Perhaps some of the Democratic faithful will even believe him.

But Kerry’s peace talks are a charade. If he’s lucky, the participants will close their talks with an announcement of some new “principles” or “understandings” for future discussion.

Smiles, handshakes, expressions of gratitude and hope all around. But the beat(-down) for the Palestinians will go on. And the settlers will continue to grab their land.

EDITOR’S PICK Victor Argo: Handing back the keys to Tahrir