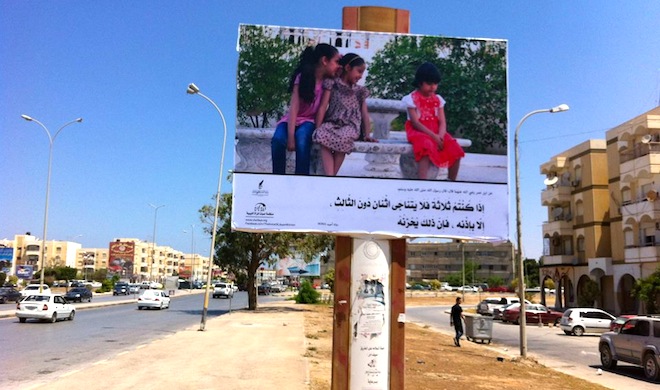 By focusing on Qur’anic verses and Islamic Sunnah, Project Noor aims to legitimize their discourse on women’s security concerns using particular religious passages that point to the proper treatment of women.

More than 30 graphic designs addressing domestic violence are now covering billboards throughout major Libyan cities in the hopes of beginning a discussion on the everyday security concerns of Libyan women. Alongside television commercials and radio prompts, Project Noor hopes to open the public’s eyes to the longtime problem of domestic violence and sexual abuse against women across Libya.

Project Noor follows on the heels of two years of research conducted throughout several major cities in Libya which looked to chronicle women’s opinions and ideas in regards to these security issues and the action that must be taken in order to prevent them from continuing on. With “no clear statistics” on the prevalence of domestic and sexual violence among Libyan women, the Voice of Libyan Women (VLW), an NGO founded during the revolution in 2011, sought to “finally get some real results while raising awareness on sexual violence” commented Nadia El-Fallah, manager of Project Noor.

“Starting in November 2012, the VLW lead Libya’s first security assessment focusing on the impact of security on women’s political participation,” El-Fallah notes and continues, “it was an opportunity to gauge women’s national security concerns but also their security concerns that affect them on a daily basis.”

Gathering these survey results, the VLW organized the “One Voice 2013: New Horizons” conference, which brought together numerous government officials, international ambassadors, and women from across Libya. The conference aimed to further develop these survey results into a viable plan of action aimed at reducing the incurrence of sexual and domestic abuse.

Project Noor is aiming to expand beyond media sources

El-Fallah stressed the success of this conference, noting three important outcomes relating to women and security, including “creating a dialogue about women’s security concerns” and “distributing an advocacy toolkit to each of the One Voice participants” which allowed VLW greater outreach by “bringing in more partners to conduct surveys nation wide.”

Project Noor, however, promises to be a challenging feat for the women of VLW and Libya, as one of the projects main tenets is to reconstruct the role of women and the notion of domestic and sexual abuse through the use of religious language. Focusing on Qur’anic verses and Islamic Sunnah, Project Noor aims to legitimize their discourse on women’s security concerns using particular passages that point to the proper treatment of women.

According to the Project Noor press release, surveys and seminars conducted among Libyan women discovered that the “most common justification for discrimination against women was the misunderstanding and misrepresentation of Islamic teachings”. The incorrect interpretation, according to the VLW, has improperly influenced Libyan culture, thus incorporating the mistreatment of women as part and parcel of the Libyan culture. So how does Project Noor intend on challenging these religious interpretations?

El-Fallah stresses the importance of Project Noor as an “awareness campaign” during its initial phase, “focusing on media and seminars as a means to educate the public on women’s security concerns.” Not necessarily a direct challenge to the “misunderstandings” of Islamic teachings, Project Noor strives to simply provide the framework from which the public can begin to tackle the issue of sexual and domestic violence. Project Noor’s media campaign, El-Fallah hopes, “will be the tool for sparking conversations in people’s homes, mosques, (and) coffee shops,” and thus the starting point in reevaluating women’s positions on a national scale.

“The reason why (Project Noor) has been well received thus far is because we paired issues of women’s security to proper treatment of women in Islam.” Without justification of Project Noor through an Islamic discourse, the VLW stands the chance of alienating the overwhelmingly Muslim majority in the country, locating them even further away from their intended goal of discussing the importance of women’s security issues.

“I come from a very religious family,” comments 23-year old Alaa Murabit, founder of the VLW, in a YouTube interview, “and have never experienced these issues in the name of Islam.” Alaa emphasizes the variations of Islam, and its subsequent culture in Libya, supporting the VLW and Project Noor’s hopes to redefine women according to the proper treatment determined in religious doctrine.

Project Noor is aiming to expand beyond media sources and continue moderating seminars around Libya, increasing Project Noor’s outreach capabilities. The women aim to “break down the misunderstanding and misinterpretation of Islam that has limited women’s participation in society” thus far. Project Noor hopes to infiltrate the public in hopes of highlighting the situation of Libyan women and to establish a plan for their betterment not only in the present, but throughout the post-revolution era.