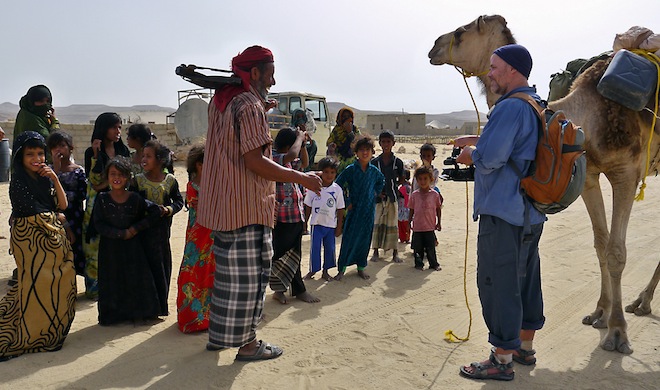 Swedish explorer Mikael Strandberg has spent 2 1/2 years making a film that shows a different side of Yemen than the negative news that you see and read in the media. He bought a camel and travelled across some of the hottest deserts on earth. These are his reflections.

My biggest worry since the day I decided to put all my life into doing a documentary about Yemen has been whether I would be able to do this great country justice. Even today, whilst writing this article the news coming out of Yemen is as always extremely negative. This unfortunate fact also applies to documentaries made about Yemen.

Just after my second visit to the country in 2011, during the big battle between Abdullah Ali Saleh, Ali Mohsen and the Al Ahmar Clan, a documentary was broadcast across the Western world, where a British reporter amazingly claimed he was the only foreign journalist in Yemen. His documentary is also extremely misleading. Sure, it was done during a time where filming wasn´t all that easy. It was even at times a dangerous activity, but definitely possible.  But not only does it seem like it was partly filmed by somebody else, but it was one of these documentaries purely made to sell to make a buck, to ensure the filmmaker became a hero and claiming, as it is in the expedition world, to be unique and having done a “world first”.

A year later a journalist in whom I had a lot of confidence makes a documentary for PBS about Al Qaeda in Yemen. It is another horror movie about Yemen, making the viewer believe Al Qaeda or AQAP or Ansar Al-Sharia are all over the country. I fought a battle with Swedish Television not to broadcast the documentary. I found it misleading. They decided to broadcast it. Most likely due to that it was a PBS job and they do come across as more serious than a Fox News production. For me it was a poor job; all horror, where the viewers were narrated one thing, but seeing something else. And the main drama was the reporter´s upcoming meeting with one of the real leaders of AQAP, which never materialized. Thus, we had yet another documentary adding salt to Yemen´s already poor reputation as being one of the most dangerous countries on earth.

“You will always, always be a positive part of my heart”

On the other side of the coin, famous Swedish director Lasse Hallström made a Hollywood film called Salmon Fishing In Yemen. During this time I received quite a few emails from people saying what a beautiful and peaceful country Yemen seemed to be. It is even more beautiful than in the film I told them, adding that nothing was filmed in Yemen but in Scotland and Morocco. I understand the impossibility for a big production of getting insurance to do the job in Yemen, but at least one could bring onboard some Yemeni experts on the research team.

All this was happening whilst I was doing my own filming. In two parts; one for three months in the end of 2011 and one for three-four months in 2012. In between I closely followed news and developments every day. Yemen had all my attention and I felt bad for all the negative news, which even made me much more worried than I generally am, because I knew I had to do something which I personally considered more just. I had also done the mistake of promising everybody I was dealing with in Yemen, that I was going to do a documentary which would show the other side of this amazing country. The overwhelmingly positive. This bragging is another reason that since the day I decided to shoot the documentary, early 2011, I have been very, very worried. It is so easy to get caught up with other issues! Because Yemen is a very complicated matter!

My first idea when I started out sketching how I wanted the documentary was that I wanted to do a journey across Yemen by camel. Camel, because I admire and love this animal and walking definitely makes a visitor get closer to the people one comes across, compared to for example travelling by car or bicycle. Sure, many Yemenis I have met during my travels doesn´t fully understand neither the concept of walking or travelling with a camel, but at least we meet relatively offhand. For this reason I didn´t want either a big team or a big camera accompanying me. I should keep it small and easy. Inoffensive and unthreatening.

I was also aware of the negative attitude prevailing in the West towards Islam, Arabs and the Middle East in general and at first I wanted, somehow, to try to change this mindset a bit, though I didn´t want to lecture. And I was profoundly aware that much better human beings and documentary makers have tried this before me and failed, so after awhile I realized I had to avoid politics, religion, bitterness, hatred and concentrate on doing what I have always done, meeting people during quite extreme travels.

I am happy I took this route, because I feel that I really have made a documentary which is fair, positive, funny and presents Yemen the way I see it. Like a great dream! It is kind of a road movie involving Kensington The Camel, Tanya Holm and me. Great nature, full of drama, beautiful, and an array of wonderful people and never ever boring. It took 2 1/2 years to figure it out; making a documentary is an expedition itself, full of obstacles and potholes. And it couldn´t have been done without the help of others – when producing a film it is extremely important to have a team who have opinions. For this reason, I concentrated fully on the second part of the trip, the one through Al Mahra. Leaving me with 200 hours of film not used at this stage.

I have done one film for TV and will start working on others for the cinemas and festivals – the base will be the same, but approaching a different audience. However, most of all, I look forward to the day it can be broadcast and viewed in Yemen. And remember, it is not a political, religious or opinionated documentary, just a simple observational road movie.

Most of all, it wouldn´t have been possible to do this documentary without the help of all Yemenis I have come across throughout the years. You will always, always be a positive part of my heart.