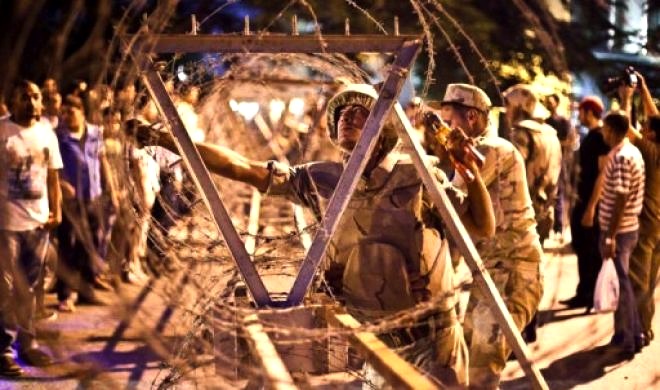 Reham M. Omar writes about an Egyptian community that has turned against itself: “my father – the epitome of a middle class, hardworking and, in comparison to many others, reasonable man – has had intense fallouts with friends and family members who made the fatal mistake of disagreeing with him.”

My father is an extreme patriot; a self-built proponent of the “Abd Elnaser” regime and the kind of person who’d leave a comfortable, secure life in New Zealand during his citizenship procedures mainly because he missed his homeland.

As most Egyptians, he was a resolute supporter of the January 25 revolution, and only reluctantly voted for former president Morsy, believing him – at the time – to be the lesser of two evils, and believing that his upcoming reign would only be a trial period, that the Egyptian nation would no longer be oppressed or subjugated after it had finally found its long-lost freedom.

Throughout the following two years, my father started to doubt his decision; the signs of the Muslim Brotherhood’s reliability were not in their favor, and their willingness to work for the well-being of the country rather than the Brotherhood league came into question.

As evidence against them continued to accumulate, his resentment (among that of many others) manifested and escalated.

Allegations became entirely contradictory on both the opposing and affiliated ends

Till this point, I was impartial… not wanting my personal fluctuations to cloud my judgment, being swayed in both directions, and admittedly influenced by opponents and supporters of the system alike.

I became inclined to agree that the Brotherhood’s administration lacked the will-drive-ability to successfully manage this country; as their proceedings were seemingly driven by personal interest and vindication, and the sought-after consistency synonymous with a reliable administration was alas absent… But I remained silent, voicing my concerns when accessible, and avoiding lengthy debates with extremists from both ends.

Finally came the July 6 uprising or coup; and I could witness the change in the society’s demeanor. Aggression rose, Islamist leaders were making infuriating declarations, and the Egyptian community started turning against itself.

Allegations became entirely contradictory on both the opposing and affiliated ends – some claims seemed logical, others irrational. A layperson could barely distinguish fact from fiction; it became easy to justify the inexcusable, because any information could be distorted, and pretexts were as easy to fabricate and manipulate as a child’s fable.

My father though was decisive all the way. Sadly, the downside of being committed to a cause is that you’re prone to becoming a fanatic, and a slave to selective perception. I began pointing out the flaws in the system; which was interpreted as empathizing with the Brotherhood.

Moreover, when I announced that I didn’t fully trust the SCAF and that military figures should not be appointed to governmental administration, I was showered with accusations of disloyalty. I witnessed firsthand the shift in relationships, and the extremes in which some were willing to cover in order to condemn others.

The basis of a well-constructed argument is solid facts and logic, but once you walk down the streets of Egypt and hear cursing, swearing, and the spread of fallacious rumors, having a reasonable debate is out of the question. The situation reached a staggering state, to the point where I often contemplated the prank of dressing up in Niqab (full head dress) and saying that I was “E5wan,” just to document peoples’ reactions (not that I’m exonerating them from fault, but because they’re the minority). Preaches of “All blood is sacred,” and “self restraint” became futile.

Hundreds of casualties on both sides, and a country fueled by hatred and sectarian conflict; simply because a few of its citizens failed to consider the repercussions of their announcements, or failed to care… and the masses followed as cattle in a herd.

As for my father – the epitome of a middle class, hardworking, and, in comparison to many others, reasonable man – he has had intense fallouts with multiple friends, acquaintances, and family members who made the fatal mistake of disagreeing with him. He wouldn’t go so far as disowning me, since I am, after all his daughter – but let’s just say that our relationship is far from smooth sails.

So here we are – curfew, group massacres, state of emergency, economic deterioration, threat of civil war, unqualified military administration – and we’re still set on our ways, and going strong.

Our national crisis lies beyond “who initiated the clashes,” or “who executed the most offences”; it lies in our failure to become objective when we desperately need to keep our cool and remain rational and reasonable.

We are fast to believe what corresponds with our initial inclinations, while quickly brushing off what opposes them – not giving it a moment’s skepticism or doubt. I can speak indefinitely of the virtues of this Nation; alas these virtues are often obscured by an irrational, short-sighted judgment – the perfect pretext for larking foes to jump to our criticism and an incentive for other countries to undesirably intervene.

Conspiracy theory? I’ll leave that for you to decide.

CHECK OUT OUR DIALOGUE THEME