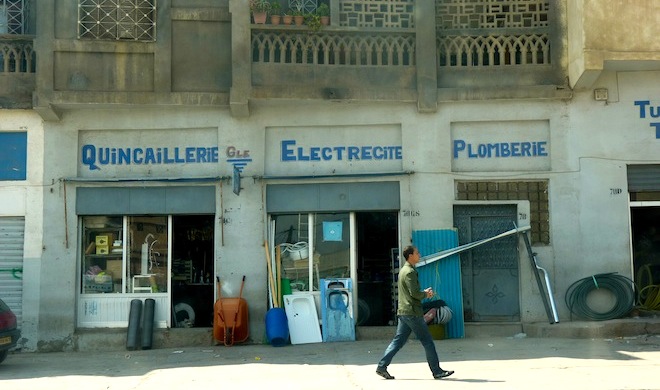 Arabic is an official language throughout North Africa. But darja – a colloquial mishmash of the region’s linguistic heritage – is the style primarily used in daily life. And it is spreading.

“Achou? parler dziri?” This sentence alone is loaded with linguistic history. If you understand it, you’re probably of North African origin or have heard this collaboration of languages being spoken before. A melting pot where different cultures and languages come together, the North African and darja dialects are still considered (less coherent) versions of the Arabic language.

There have been efforts throughout the Arabic speaking world where the preservation of language has been one of the top agendas: just recently Sheikh Mohammed bin Rashid Al Maktoum, Vice-President and Prime Minister of the UAE and Ruler of Dubai stated that the preservation of “Arabic is a national, moral duty”. Yet who is to say that the creation of a newly coded language is a negative thing?

Darja nonetheless, is not new but ever evolving. The dialects of North Africa are a language museum that will never cease to be filled: from the original indigenous languages of the Berber (Tamazight) to the Islamic empire bringing Arabic through the Quran in the 7th Century and the rule of the Ottomans introducing Turkish to the language palate in the 1500s, the North African region really did absorb a lot in what linguists would consider a short space of time. The later colonisations by the Spanish and then French empires rendered the dialects of North Africa complete fusions of several languages – and many would also argue the birth of a new language altogether.

Language binds social and ethnic groups and nations together

Throughout the North Africa region (in this instance, including Algeria, Morocco and Tunisia) all assert Arabic as one of the official languages of the country, yet darja and its other varieties are actually used in day-to-day life, television and radio. In this age of media and the ever increasing global village, even more language interference is occurring in this region, namely with that of the English language. Young people mix their darja heavily with English, classical Arabic and anything else they can get their hands on. Why? Because they can. The formation of a new communicative tool and languages emphasises the many features language do share, and those that one language may own over another. This in turn provides youth with slang and variations to express themselves: the ability to forge a new, hybrid identity.

Darja now allows youth and other speakers alike to tailor their speech actions accordingly with who they are directing their words to. The classic familial institution, the work place and so forth will have completely different functions linguistically in comparison to the language used with friends or on social media. The Internet and the language used means darja speakers now more than ever adopt the use of character coding, transliterating the Arabic text into English using Latin script. Such examples include ‘mar7aba’ where the numeral ‘7’ visually represents the hard ‘h’ sound (‘Ø­’  in Arabic), which is not found in English. With North African, the combinations may equate to sentences like “ma 3la balich. Wagila demain wela el-weekend enrou7 wen shufha” (I don’t know. Maybe tomorrow or the weekend I’ll go and see her). Darja may now signify the negotiations, or struggles of a youth’s identity.

RELATED Arabizi – does the Levant youth speak Arabic these days?

Interestingly, yet not surprisingly, is the increase of darja in mainstream music, television and film. Given that the diaspora of North African individuals spans out of Africa into Europe and beyond, it comes as no disclosure that darja has subtly and gradually began to plant its roots in Western media. Take for example the French Hip-Hop group 113, whose members consist of Algerian, Guadeloupian and Mali origin. One of their most famous songs is that of ‘Tonton du bled’; which time and again throughout the song uses darja phrases such as “avant d’rentrer feudar” (“before I return to the house“), “une couche de zit-zitoun” (“a layer of olive-oil“). Of course, not forgetting the title of the song itself “bled” which is darja for ‘country‘ and the catchiest moment of the song “le le la, oua oua oua” meaning ‘no no no, yes yes yes’ in typical darja style.

Similarly, this was seen in the 1995 Mathieu Kassovitz film La Haine. Here, one of the protagonists is a North African youth living in the French housing projects of the Paris ZUP: Zone d’urbanisation prioritaire. This character, named Saïd is of Maghrebian decent and played by Moroccan actor Saïd Taghmaoui. His character frequently uses darja in his dialogue; predominantly profanities which make his character slip back into darja from French. Code-switching is one of the greatest features North African speakers can claim.

Language binds social and ethnic groups and nations together. It therefore defines a societal group and its identities. In the case of darja, it marks not only the social and ethnic history, but also the openness to the globalisation and the relationship with the lingua franca of English.

Not only are the speakers of darja becoming more and more dispersed among many countries, their Internet and communicative presence juxtaposes the conventional idea of what linguistic unity may entail.