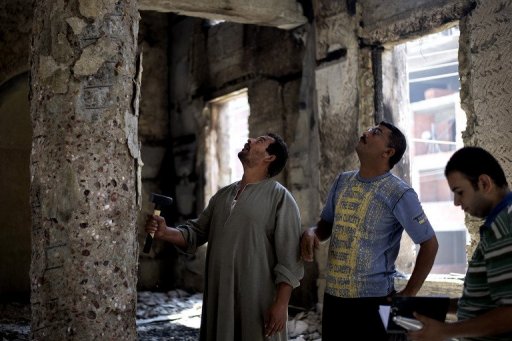 Coptic Christians in the Upper Egyptian city of Minya are managing to restrain their anger despite a wave of devastating attacks on their churches and institutions by enraged Islamists.

Tensions are still running high more than two weeks after the attacks in the city some 250 kilometres (155 miles) south of Cairo but there have been no calls for vengeance, nor any fiery rhetoric.

“I say to the Islamists who attacked us that we are not afraid of their violence and their desire to exterminate the Copts,” said Botros Fahim Awad Hanna, the archbishop of Minya.

Enraged by a bloody crackdown mid-August on protests in support of ousted president Mohamed Morsi in Cairo, Islamists lashed out at Coptic Christians in Minya, accusing them of backing the military that toppled the head of state.

The Copts, who account for some 10 million out of Egypt’s population of 80 million, had already suffered persecution in recent years.

But they say they have never such a systematic campaign as this.

“We were expecting a violent reaction but not on this scale, which suggests it was well prepared,” the archbishop said.

In the greater Minya province, where Christians account for about one-fifth of the five million population, Christians say they have suffered systematic and coordinated violence since mid-August.

According to Human Rights Watch, more than 40 churches have been attacked in Egypt since August 14, when the security forces launched a bloody crackdown against demonstrations demanding the return of Morsi, who was toppled by the military on July 3.

The attacks have been concentrated in Minya and Assiut, in central Egypt, where attackers torched 11 and eight churches respectively, the US-based rights group said.

Islamists accused Egypt’s Copts of throwing their weight behind the military coup that removed from power the Muslim Brotherhood, from which Morsi hails.

The perception was fuelled by the fact that Coptic Pope Tawadros II appeared with army chief General Abdel Fattah al-Sisi when he spoke on television to announce Morsi’s removal from office.

At the ruins of Saint Moses’ church in Minya, Bassam Youssef, a Copt, despairs at the sight of the rounded building with its clock tower, now ravaged by fire.

“Some 500 extremists attacked the building and set it on fire,” Youssef recalled.

“We did not expect such violence,” he added, showing pictures of the church before its destruction.

“Look at this beautiful mosaic that decorated the interior balcony, there’s nothing left and we will need five to six years to rebuild everything.”

The centre of Minya is a tangle of shops bearing a mix of Christian and Muslim names, and home to both churches and mosques, some just dozens metres (yards) from each other.

Not far from Saint Moses’ church, Um Saleh watched over what is left of the Coptic school, which was also set alight.

“We heard them calling for jihad (holy war) and we rushed out of the area, terrified,” she recalled.

From one of the windows of the school, it is possible to see the scorched dome of the Prince Theodore church. Several metres away, a Coptic orphanage has also been burned.

“May God forgive you despite what you have done,” reads a slogan daubed on the walls of the orphanage, now empty of its young wards.

At the headquarters of the Jesuit Brothers’ development association in the town, Father Biman is working to clear the debris after the attacks.

Fire destroyed the library, a nursery and the offices, but spared the nearby church of Saint Mark, which has stood there for 125 years.

“I am very angry,” Biman says, before regaining his composure. “I also have compassion for the attackers, who have been brainwashed”. He points to his T-shirt, which has a slogan on it calling to spread love around the world.

Maria Hanaa, an official at the Jesuit association, sees the attacks as a direct result of the community’s antipathy towards Morsi.

“We demonstrated against president Morsi and it is the first time we did it, and we paid the price,” she says.