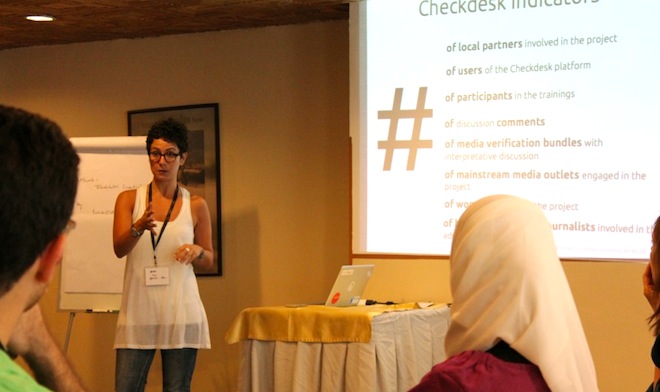 The platform promotes the accuracy of reported events

This initiative is the first of its kind in the MENA region, and is supported by the Swedish International Development Agency (SIDA), the Arab Partnership Participation Fund (APPF) and the International Press Institute (IPI).  Previously, Meedan launched an alpha version of the live blog with Al Masry Al Youm in Egypt after the Egyptian uprising. The Checkdesk project comes in light of the success of the trial version, and the high rates of penetration it scored, especially at the time of presidential elections last June.

Preparations to launch Checkdesk date back to 2012 when Meedan worked on developing the digital platforms of the live blog, and cooperated with the six media institutions to train citizen journalists to use it. Around 1200 citizen journalists were trained on the basics of citizen journalism and on the proper usage of the live element. The material offered in the trainings was in turn prepared by Birmingham City University.

Hawary adds that aside from promoting citizen journalism, the key goals of the platform are to train citizens on using digital tools including Checkdesk, facilitating fact-checking and verification of reported events, increasing accuracy and credibility, and finally contributing to a positive change in the journalism field across the region.

To note, Meedan is a non-profit organization whose mission, as stated on its website, “is to promote better informed, more globally-minded culture by designing software and programming that provides opportunities for exchange of ideas and information on the internet, with a focus on Arabic and English speaking online communities.”