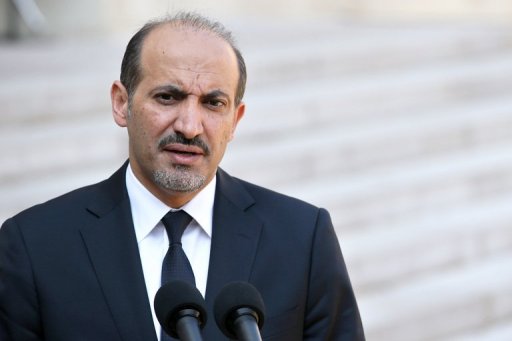 A surprise Russian initiative on Syria’s chemical weapons has enraged the country’s opposition, which slammed it as a “manoeuvre” only aimed at saving President Bashar al-Assad’s regime from US strikes.

“We call for strikes and we warn the international community that this regime tells lies, and the liar Putin is its teacher,” the Free Syrian Army (FSA) leader told Al-Jazeera television.

After hopes among dissidents that a seemingly imminent US strike against Assad’s regime would give the rebels a boost, plans for action appeared to have been put on hold.

“The regime wants to buy time to save itself” from the threatened US-led air strikes, said Idriss.

On Monday, amid US talk of a punitive military strike on Assad’s regime, Russian Foreign Minister Sergei Lavrov met his Syrian counterpart Walid al-Muallem in Moscow.

He urged Damascus to “place the chemical weapons under international control and then have them destroyed”.

Muallem later said: “Syria welcomes the Russian initiative based on the Syrian leadership’s concern about the lives of our nationals and the security of our country.”

Idriss said Damascus and Moscow both “know that a vote is coming up in the US Congress, and they also know that such strikes would bring down Assad’s regime”.

Opposition National Coalition member Samir Nashar said it is not the first time his bloc has been disappointed by its friends in the international community.

“We have been disillusioned again and again by constant delays in striking (Assad’s regime), by the changing US position and by deals struck at the expense of the Syrian opposition,” Nashar told AFP.

The Russian initiative “was completely unexpected, and it was a surprise to us,” he added.

“A strike was supposed to strengthen the opposition and weaken the regime, to the point that it would realign the balance of forces” in Syria’s war, said Nashar.

Now, the Russian proposal would give the regime more time, and “allow Bashar al-Assad to continue to kill and destroy.

“It’s as though they are giving him permission to just go on, only without chemical weapons, whose very existence he did not even recognise to start with,” Nashar added.

Though the US proposed strike would not have been aimed at bringing down the regime, the FSA said days ago it was planning to “exploit” it in order to gain ground.

“For the Americans, these strikes might be cosmetic, but for us, we will exploit them as a gateway for the collapse of Bashar al-Assad’s regime,” FSA spokesman Louay Muqdad told AFP.

The Coalition on Monday condemned the Russian initiative as a “political manoeuvre”.

It also said Lavrov’s plan “does not address the issue of accountability for crimes against innocents”.

More than 110,000 people have been killed in the Syrian civil war.

After US President Barack Obama cautiously welcomed the Russian initiative, enraged activists on the ground said they had been abandoned by the international community once again, and talked of conspiracy.

“The Russian offer means only one thing: Bashar al-Assad will escape punishment. This is a deal swapping (chemical) disarmament for the blood of martyrs,” said anti-regime activist Mohammed al-Tayeb.

The initiative allows the regime “to gain time, which is its favourite game,” Tayeb told AFP over the Internet.

“The Americans, the Russians and all the West want the conflict to continue until both sides are weak,” the activist added.

Malek Abu Kheir, another activist, said opponents of Assad were “in a total state of shock and disbelief”.

“The strike would have allowed the rebels to enter Damascus, leading to the fall of the regime,” he said.

Karim Bitar, an analyst at the French Institute of International and Strategic Relations, said the rebels now felt “abandoned”.

“They have been promised a lot for two, three years, but these promises haven’t been kept,” Bitar told AFP, adding he doubted a strike would take place at all.

“On the ground, we will have a regime that remains determined to crush the rebellion, and dismayed rebels who may become radicalised,” he said.

“The war of attrition will likely drag on.”