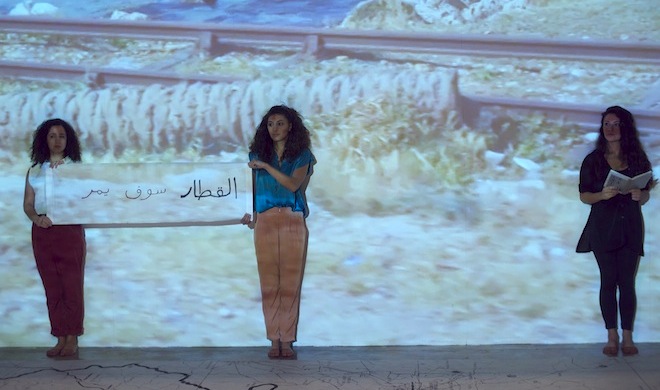 What some simply consider a case of Lebanon’s poor infrastructure development and an effective lack of public transportation, others see as an opportunity to delve into an alternative history of the country and its people.

In “Nothing to Declare” members of Beirut-based Dictaphone Group trace the history of and abrupt end to Lebanon’s railway network. During their theatrical journey, they not only dig out what is left of the actual tracks, sprinkled with their own personal memories along the way, but uncover stories behind the first railway network in the Middle East, established in the early 1890s, and what has kept it from seeing the light again.

Held at Beirut’s Ashkal Alwan contemporary art space on September 11-12, this multi-disciplinary lecture performance takes the audience to Beirut’s abandoned Mar Mikhael train station, from where a fascinating journey begins.  Tania El Khoury goes to the north, recounting the railway network’s stories meshed with those of Syria’s 30-year occupation of Lebanon and that of the Lebanese Army, as it expropriated train stations for its own barracks.

Petra Serhal heads east, on the most developed network of all, once connecting Beirut with Mecca. What is left of its rundown train stations also hide stories of the Syrian occupation, one hosting their intelligence headquarters and arbitrarily detention and torture centers.

Abir Saksouk takes the beautiful Mediterranean coastal road to the south, in what is perhaps the most historically contentious of all. This segment of Lebanon’s tracks once continued all the way to Palestine, and soon became a means whereby Palestinians could escape Israeli occupation and violence, but not a means to go back to their homes.

In whatever direction they headed, Tania, Petra and Abir never failed to encounter the labor of love of former train employees trying to preserve what is left of their trains and stations, hoping they would be revived someday or at least not forgotten by history. Beshara Assi, who still heads the syndicate of rail workers, worked at the Railway and Public Transportation Authority in Mar Mikhael. He has been living in the Baabda train station since the early civil war years, to protect it from being taken and destroyed by warring militia factions. Tales of politics and corruption are impossible to hide, which have played a pivotal role in stopping the rehabilitation of the railway network in the post-civil war era. A conversation between Assi and late Prime Minister Rafik Hariri highlighted during the performance, explains how Assi refused to cede a piece of land related to the railways for Hariri’s own real estate project. Hariri explicitly bribed him with four times his salary, but Assi refused and left his job.

ALSO READ Will Lebanon’s banks cope with the crisis?

More recently, former Prime Minister Fouad Siniora sold a piece of railway land while in office, which now hosts a major shopping center in Beirut. Though not mentioned in the performance, it wouldn’t be surprising to discover that Siniora made a hefty cut out of the illegal deal.

Nothing to Declare is more than just a history of trains, but a deeper investigation into how an age-old mode of transportation reduced the physical and social barriers in an already highly fractured country. Halfway through her own journey, Serhal points to the confessional diversity of all the villages that the eastbound train connected from Beirut to the Syrian border. Today, such a connection has been considerably weakened and with it, the connection to neighboring countries in the region too. A connection first severed by arbitrary colonial borders in the early 1900s, affecting not only personal connections but economic exchanges, takes another blow with yet another obstacle in its way.

Dictaphone notes that Lebanon is the first station in its broader study of borders across the Arab World, as it hopes to revive the former railway network in the region, if only as an engaging performance and an exercise in nostalgia.

Nothing to Declare ends with each performer reading the memories of those who operated the last trains in their respective locations. Sadly, nothing seems to indicate that these words will be replaced by a call for the next train. Asked whether he thought trains would ever be revived in Lebanon, Assi, who was present and often visibly moved by the performance, could barely answer with a “no,” simply moving his head left and right to express his sorrow and frustration that trains were now part of history.

EDITOR’S PICK Lebanese rebels with a cause