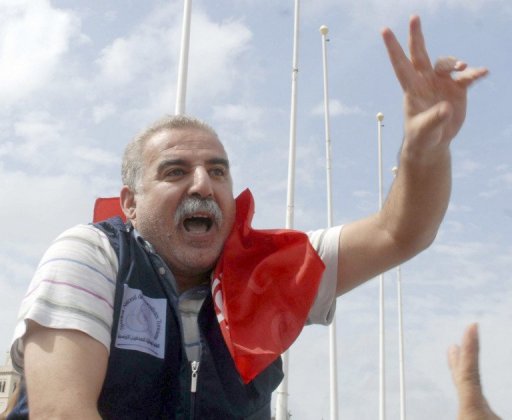 A Tunisian journalist whose arrest sparked an outcry was freed on bail Monday on the eve of a media strike to protest against press restrictions imposed by the Islamist-led government.

“It’s a victory for everyone who supports freedom of expression over those who, with the help of the judiciary, would like to suspend this freedom and settle their scores with people not willing to give it up,” Zied el-Heni told AFP after bail was paid for his release.

The national union of Tunisian journalists has called a general strike for Tuesday, only the second in its history, to denounce curbs on press freedom.

Heni was placed in pre-trial detention on Friday for accusing the public prosecutor of fabricating evidence implicating cameraman Mourad Meherzi in an egg-throwing attack on a minister.

The cameraman spent three weeks in prison before being released on bail, while the egg-thrower — a film-maker — remains in custody.

On Friday evening, after Heni was detained, a judge agreed to grant him bail, but it was not possible to pay the bail money until Monday morning, so the reporter spent the weekend in jail.

“The file must now go back to the judge who must listen to our arguments. In my opinion this case should be dismissed,” said Heni’s lawyer Abdelaziz Essid.

His comments were echoed by Reporters Without Borders, which called his pre-trial detention “totally unjustified” and designed to silence any criticism of the charges against Meherzi.

Ennahda, the Islamist party that heads Tunisia’s ruling coalition, said the accusations were wrong and formed part of a slander campaign against it.

Hundreds of demonstrators gathered on Monday at the Kasbah in Tunis, where the government’s headquarters are located, in a show of support for Heni and to protest against restrictions on freedom of expression.

The journalist’s detention has been preceded by other cases that have stoked fears in Tunisia that Ennahda, the judiciary and the police are trying to stifle freedom of expression, seen as a key achievement of the 2011 revolution that triggered the Arab Spring.

Two rappers were convicted at the end of August and sentenced to 21-month jail terms over songs deemed to be defamatory towards the police force.

The singers — who are on the run — had not been told there were charges against them, let alone that there was a trial.

The Tunisian presidency on Monday reaffirmed its commitment to “the sacred principles of freedom of expression and opinion,” and called for new legislation to prevent “abuses” committed by the media from being treated as crimes carrying possible prison sentences.

Media rights in Tunisia are theoretically governed by two decrees adopted after the revolution, designed to guarantee press freedom and regulate audiovisual media.

But the public prosecution continues to rely extensively on the penal code inherited from the ousted regime of Zine El Abidine Ben Ali and still in force, under which press offences can be punished by jail terms.