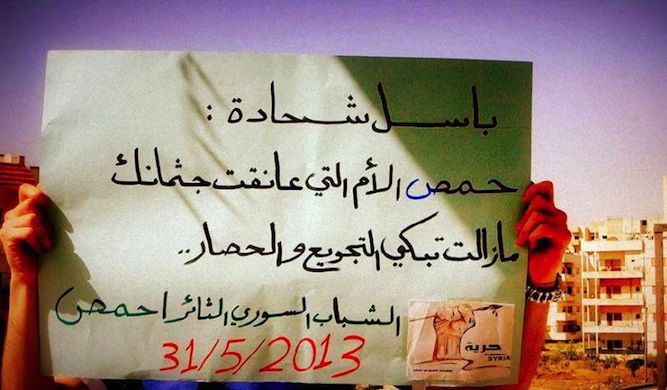 Since the start of the Syrian revolution in March 2011, the regime has targeted, killed and detained nonviolent activists. However, there is still a group of young activists - men and women - who continue their civil resistance despite increasing militarization. They are the face of today’s Syrian civil disobedience.

Syria Untold searched for these activists, wanting to give them the opportunity to tell their story in their own words. Who are the youth who continue to organize demonstrations and other civil disobedience initiatives?

They are the “Syrian Revolutionary Youth,” a name they have given themselves. This name sets them apart from youth with a different opinion on the uprising on one hand, and an older generation with varying political ideologies on another. They say, “The revolution is largely spontaneous. It is not a revolution of political groups, a traditional opposition, or specific ideological groups. We use the word ‘youth’ to express this.” A member of the Syrian Revolutionary Youth says the group is composed of “young people who consider themselves leftists but are not affiliated to any specific group.” He said, “we continue to work for the revolution as the whole, participating in demonstrations and in other forms of protest.”

The vision of the Syrian Revolutionary Youth is simple.

In 2012, various civil society and nonviolent resistance groups emerged, and began voicing their opinions on events in Syria, “particularly the goals of the revolution and what the revolution represents,” one activist said. “Through the debates that took place between us, the youth, we realized that a major factor that was missing from revolutionary groups was societal context. The groups focused mostly on the political dimensions of the revolution for freedom. However, we noted that there also existed a socioeconomic factor in the revolution of a poor people against an exploitative regime. So we decided to create a group for Syrians with this vision, and the Syrian Revolutionary Youth group was born on May 1, 2012.”

The first activity held by the group was a demonstration in Rukn al-Din, after which activists distributed leaflets. “Truth be told, we came out in the same area we had come out in the past, and repeated the same chants,” the activist added. “But this protest gave us a collective identity, because it was the first time we came out under the name ‘Syrian Revolutionary Youth.’”

The Syrian Revolutionary Youth are most active in Homs and Damascus, though the group is present in other governorates as well. The activists say they have no qualms about “collaborating with any other nonviolent group working for the revolution,” and have participated in campaigns such as “We are the Moral Alternative” and “The Human Revolution for the Sake of Life” with other activists.

The group expresses its demands for the downfall of the regime and freedom of expression through banners held at protests. They focus on “the socioeconomic demands that represent their movement.” They are determined to continue their nonviolent civil resistance in an increasingly militarized conflict to “respond to those who say that the revolution has become totally militarized and that there is no more room for peaceful protest,” saying that their work on the ground proves otherwise.

An activist in the group commented on the relationship between the armed and peaceful uprising. “True, armed resistance is more prominent, but nonviolent activity accompanies it,” he says. “The military option will not fulfill all the demands of the revolution. It will help us reach a certain point, after which we will have to continue the peaceful struggle to meet the rest of our demands.”

Women are notably present in the group’s protests and activities, defying the narrative that the militarization of the Syrian struggle caused a decline in female participation. There is always room for anyone who wishes to participate. “Since the start of the revolution, young women have been working with us and going out in protests just like the guys did,” one activist said. “One of the goals of the group is to ensure that women are given their rights.” Female participation has not declined despite all the pressure nonviolent activists are facing, starting with the lack of security and the arrest of five of their members, as well as economic strains.

“Because of our independence, we have not received financial support from anyone. We fund our own activities, which limits what we can do. There are many activities we could have done, but we did not even consider due to the lack of funding.” He explained that a lack of satellite internet prevents these activists from reaching out to journalists.

“Most media platforms require that we adopt their ideology, something we refuse to do. Protests that are held in the same vicinity as ours get a lot more media attention than ours do, as the media tends to ignore us because of our political independence.”

The Syrian Revolutionary Youth consider summer 2012 the best period in their history. “We did not only protest, we used to turn our demonstrations into nights out. Most Damascene activists would join our protests, and we would stay out and enjoy our freedom.” The most painful moment for the group was when two members were martyred, though each was killed in a separate setting. “We were overcome with grief, and are still saddened by their death, but we are also determined to continue the path they were treading.”

One activist says of the groups dreams, “We have no dreams. Rather, we have a series of realistic goals that we hope to achieve. We want a civil, democratic state and social justice.”

The vision of the Syrian Revolutionary Youth is simple. If the people want to live, they must respond to their destiny. If they want freedom, they must take it by force. And that is what they are doing.