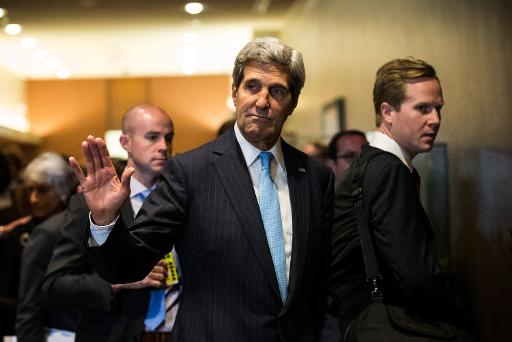 With the eyes of the world upon them, the United States and Iran will Thursday have one of their highest-level meetings since the 1979 revolution as their foreign ministers join talks on Tehran's suspect nuclear program.

With the eyes of the world upon them, the United States and Iran were poised Thursday for one of their highest-level meetings since the 1979 revolution, as their foreign ministers join talks on Tehran’s suspect nuclear program.

And while officials are saying that no bilateral talks are planned between US Secretary of State John Kerry and his Iranian counterpart Mohammad Javad Zarif, there remains the chance for a quick tete-a-tete in the corridor.

Zarif will be the first Iranian foreign minister to sit down with his counterparts from the five permanent members of the UN Security — Britain, China, France, Russia and the United States — plus Germany to discuss Iran’s nuclear program.

“We’re going to have a good meeting I’m sure,” Kerry said early Thursday as he met his Chinese counterpart Wang Yi.

The Iranian delegation will only join part of the talks being hosted by EU foreign policy chief Catherine Ashton however, and no one is keen to raise hopes of a breakthrough in the dragging negotiations.

Indeed the encounter with European, Russian and Chinese foreign ministers is set to be brief.

It comes after speculation that Iran’s new President Hassan Rouhani would meet or at least shake hands with President Barack Obama at the United Nations fizzled out.

But diplomats say Thursday’s meeting will give them the first chance to take the measure of the new Iranian leadership which took office in August.

And they insist it will give the Iranians the opportunity to prove there is some substance behind Rouhani’s charm offensive, and his claims that Iran is only seeking to pursue a peaceful civilian nuclear energy program.

Asked what the Iranians needed to do to prove they are serious, Kerry replied: “I’ll let you know after they’ve been serious.”

The international powers made a new proposal to Tehran this year, before Rouhani’s election, believed to offer some relief from international sanctions that have crippled Iran’s economy in return for a scaling back of its uranium enrichment.

“There’s a sense that we never actually got a firm response or a detailed response to that,” a senior US official said.

One Western diplomat said however that “while we are sensitive to signals there isn’t the slightest overture, it’s the same old speech.”

“We told him that there is an offer on the table, and that if you have an offer we’ll look at it carefully,” the diplomat said.

“If the Iranians say they want a new round of talks as they have something serious to propose, we’ll accept. If there is the slightest opportunity we’ll take it.”

For his part Zarif said on his Twitter account from New York: “We have a historic opportunity to resolve the nuclear issue,” if world powers adjust to the “new Iranian approach.”

In remarks published Thursday by Iran’s official news agency IRNA, Zarif said a meeting between the two presidents “would have been a good beginning.”

“A meeting is not an end in itself, nor is it ruled out… President Rouhani has no problem in principle” with meeting Obama, he said.

He called Obama’s remarks at the United Nations “more moderate” than in the past, adding: “If that is the basis of a new political will to solve misunderstandings and ease Iranian concerns, this would be more important than a meeting.”

Obama and Rouhani, in almost back-to-back speeches at the United Nations on Tuesday, both stressed their willingness to try to resolve the nuclear issue. But they came at it from different perspectives.

Rouhani said Iran poses “absolutely no threat to the world,” and condemned the international sanctions against his country.

He reiterated Iran’s longstanding position that the international community had to accept Iran’s nuclear activity, which Western nations say hides an attempt to reach a nuclear bomb capacity.

Noting that Rouhani has said Iran will “never” build a nuclear bomb, Obama said there was a basis for “a meaningful agreement.”

But he stressed: “To succeed, conciliatory words will have to be matched by actions that are transparent and verifiable” on the nuclear program.

“The roadblocks may prove to be too great, but I firmly believe the diplomatic path must be tested,” Obama said.

And in an interview with The Washington Post, Rouhani said he hoped to reach an agreement on the nuclear program within three months, insisting he had the full backing of the country’s Supreme Leader Ali Khamenei to broker a deal.

“The only way forward is for a timeline to be inserted into the negotiations that’s short — and wrap it up.

“That is a decision of my government — that short is necessary to settle the nuclear file,” he said.

“If it’s three months, that would be Iran’s choice, if it’s six months, that’s still good. It’s a question of months not years.”