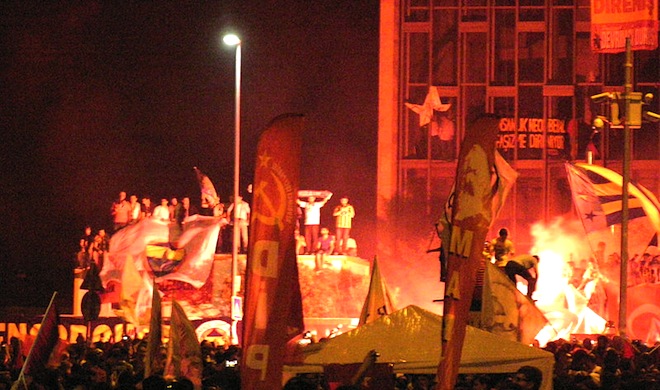 "We Turks are not known for our calmness when watching sports so this new mix of football and politics could make things even more explosive," writes Barın Kayaoğlu.

When the Turkish premier football league (Süper Lig) started last month, many observers expected to see a contest beside sports – one that would pit football fans against the Justice and Development Party (AKP) government.

There were hints of this phenomenon in the first week of the Süper Lig. First, anti-AKP football fans circumvented the government’s ban against political slogans at games by simply chanting the words “political slogan.” Other fans were more confrontational. At the 17 August match between the Istanbul giant BeÅiktaÅ and the Black Sea powerhouse Trabzonspor, cheers against the AKP and police forces drowned out all other noises. Some BeÅiktaÅ fans wore t-shirts with the names of protestors killed by police during this summer’s Gezi Park riots.

But the first week of the Turkish league also saw agitation from AKP supporters. In light of events in Egypt, pro-AKP spectators followed Prime Minister Recep Tayyip ErdoÄan’s lead and expressed solidarity with Muhammad Morsi, the deposed president of Egypt. Several players, after scoring goals, waved four fingers in reference to “raba’a,” the ordinal number four in Arabic that has become a symbol for Cairo’s Raba’a al-Adawiya Mosque, where pro-Morsi supporters were mercilessly attacked by Egyptian security forces. Emre BelözoÄlu, the captain of Istanbul titan Fenerbahçe, went even further: after scoring a goal and doing the “raba’a” gesture, he prostrated as Muslims do when they pray.

The games last weekend proved once again that the political contest in Turkey’s stadiums will involve multiple sides – not just a gesture match between pro- and anti-AKP fans.

At the last moments of BeÅiktaÅ’s home game against Galatasaray, BeÅiktaÅ fans stormed the field after a player from the visiting team was sent off. To the casual observer, that sort of hooliganism may seem normal. But reactions to the events proved that there was more to it. One opposition website claimed that a local AKP official proudly boasted how the group that had stormed the field was the “1453 Eagles,” allegedly a pro-AKP group. (The eagle is BeÅiktaÅ’s mascot and 1453 was the year when Ottoman Turks had captured Istanbul from the Byzantines, an event that still serves as a rallying point for nationalists and conservatives in Turkey.) Pro-AKP media outlets, on the other hand, blamed ÇarÅÄ±, the leading BeÅiktaÅ fan group known for its leftist politics and opposition to the AKP government. ÇarÅÄ± fans were very effective in organizing the people of Istanbul during the Gezi protests.

There is much to lend credence to the opposition’s claims. Since last summer, the AKP has attempted to punish ÇarÅÄ± for its insubordination to government fiat. (Of course, that was after the ruling party had tried to pretend that some ÇarÅÄ± members had attended a pro-government rally. It became quickly clear that the AKP supporters holding the ÇarÅÄ± signs had badly faked their placards because the BeÅiktaÅ fan group always uses the anarchist symbol “A” in its insignia.) Furthermore, Atatürk Stadium, where the BeÅiktaÅ-Galatasaray game took place, had a notable lack of riot police. Turkish riot police are always omnipresent at such events to prevent clashes among spectators.

The timing of the BeÅiktaÅ fans who stormed the field was also strange: the Galatasaray player was sent-off at a time when BeÅiktas was losing 2-1. It would have been sensible for BeÅiktaÅ fans to wait for their team to score an equalizing goal.

Finally, from the reports of BeÅiktaÅ fans who were present at Atatürk Stadium, it looks like the fans who stormed the field jump from the stands were the 1453 Eagles, not ÇarÅÄ±. For an allegedly pro-government fan group to storm the field and pro-government media outlets’ attempt to blame it on ÇarÅÄ± demonstrate that there are too many conspiracy theories in play here.

Indeed, for precisely that reason, one could contend that the AKP government had nothing to do with any of this. In fact, it is hard to say with certainty whether the AKP government is trying to marginalize anti-AKP football fans or deliberately trying to insert its own supporters into stadiums.

But that’s beside the point anyway: the image of a clash between pro- and anti-government fans is unmistakable. This image shows that Turkish football is turning into a complex political web with myriad actors having multiple interests. In the weeks ahead, football teams and their supporters hailing from smaller, conservative towns will likely put their weight behind Prime Minister ErdoÄan and the AKP. Meanwhile, supporters of teams hailing from major cities such as Ankara and Istanbul, where opposition to the AKP is much stronger, will voice their grievances against the ErdoÄan government in vocal terms.

But the clashes between pro- and anti-AKP divisions within Galatasaray, BeÅiktaÅ, and Fenerbahçe cannot be overlooked. The AKP has received close to half the votes in the last two general elections; it is only sound logic to argue that many of those AKP voters also support one of Turkey’s three major teams. Pro-AKP fans of those sports clubs are not shying away from making pro-government statements on game day.

So where will this cocktail of sports and politics take Turkey? A phrase in the Turkish language (“takÄ±m tutar gibi parti tutmak”) criticizes those who support a political party like a sports team – blindly and fanatically. The saying was meant to criticize how professional football tends to act as opium for Turkish masses. Now, the sport might actually help to create new political alliances among disparate social groups in Turkey. But we Turks are not known for our calmness when watching sports so this new mix of football and politics could make things even more explosive.

BarÄ±n KayaoÄlu is finishing his doctorate in history at the University of Virginia. He was recently a Smith Richardson Foundation fellow in International Security Studies at Yale University. You can follow him on www.barinkayaoglu.com, Twitter (@barinkayaoglu), and Facebook (BarÄ±n KayaoÄlu).