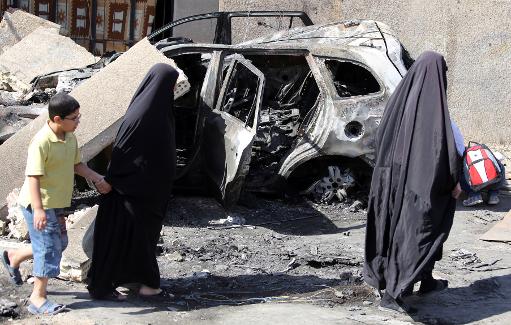 Nearly half a million people have died from war-related causes in Iraq since the US-led invasion in 2003, according to an academic study published in the United States on Tuesday.

That toll is far higher than the nearly 115,000 violent civilian deaths reported by the British-based group Iraq Body Count, which bases its tally on media reports, hospital and morgue records, and official and non-governmental accounts.

The latest estimate by university researchers in the United States, Canada and Baghdad in cooperation with the Iraqi Ministry of Health covers not only violent deaths but other avoidable deaths linked to the invasion, insurgencies and subsequent social breakdown.

It also differs from some previous counts by spanning a longer period of time and by using randomized surveys of households across Iraq to project a nationwide death toll from 2003 to mid 2011.

Violence caused most of the deaths, but about a third were indirectly linked to the war, and these deaths have been left out of previous counts, said lead author Amy Hagopian, a public health researcher at the University of Washington.

Those included situations when a pregnant woman encountered difficult labor but could not leave the house due to fighting, or when a person drank contaminated water, or when a patient could not get treated at a hospital because staff was overwhelmed with war casualties.

“These are all indirect deaths, and they are significant,” Hagopian told AFP.

The aim of the study was to provide a truer picture of the suffering caused by war, and hopefully to make governments think twice about the harm that would come from an invasion, she said.

“I think it is important that people understand the consequences of launching wars on public health, on how people live. This country is forever changed.”

The research team from the University of Washington, Johns Hopkins University, Simon Fraser University and Mustansiriya University conducted the work on a volunteer basis using pooled internal resources instead of seeking outside funds.

Their tally was compiled by asking adults living in 2,000 randomly selected households in 100 geographic clusters across Iraq if family members had died, when and why.

Researchers used the survey data, which was completed by 1,960 of those chosen, to calculate the death rate before the war and after. When multiplied by the whole population, they returned a number that represented “excess deaths.”

Researchers estimated there were 405,000 excess Iraqi deaths attributable to the war through mid-2011.

They also attempted to account for deaths missed because families had fled the country, and estimated 55,805 total deaths, bringing the total to nearly 461,000.

About 70 percent of Iraq deaths from 2003-2011 were violent in nature, with most caused by gunshots, followed by car bombs and other explosions, said the study.

Heart conditions were the most common cause of non-violent death from 2003-2011 — indicating a key role of stress in war-related deaths — followed by chronic illness and cancer.

In a perspective article accompanying the PLoS Medicine study, Salman Rawaf, director of the World Health Organization Collaborating Center at Imperial College London, said the latest research would likely be called into question, as have other estimates before it, with most “perceived as being politically motivated, deliberately either over-reporting or suppressing the number of deaths.”

“This estimate carries substantial uncertainty, and undoubtedly the methodology and findings of this latest study will be controversial and debated,” he wrote.

However, the attempt to quantify the catastrophe created by war is “valuable” in the context of understanding the health consequences of war, he said.

“Living in Iraq today is no longer about how many have died, but how future deaths should be prevented.”