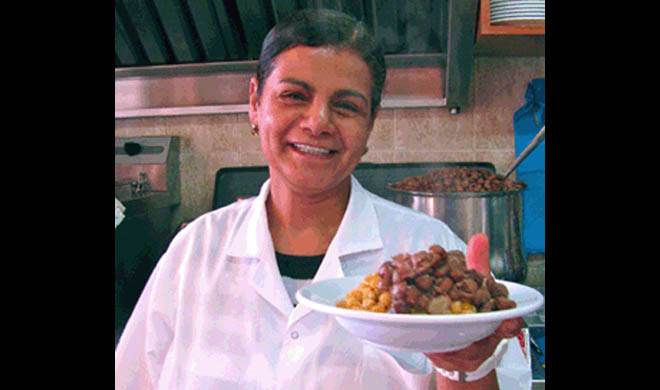 Almost all of Acre’s Old City residents are Arab. On weekends the neighbourhood is packed with people from across the north, evenly split between Arabs and Jews, finds Leigh Cuen.

Out of dozens of popular restaurants in the Old City, Hendy Sohela of Sohel Hummus is the sole woman running her own business. The restaurant’s walls are decorated with Qur’anic verses, images of the Dome of the Rock and a mounted TV screen, which broadcasts footage from the Islamic holy sites in Mecca.

Ancient Egyptians first mentioned the city of Acre in hieroglyphic carvings. In 66 CE, it was a base for the Romans when they crushed the Jewish revolt. Muslims conquered the city in 638, followed by Crusaders in 1104. Napoleon laid siege to it in 1799, but could not conquer it. Today, Acre still harbours religious diversity similar to that of Jerusalem. Yet Acre has its own unique social climate. People of all backgrounds enjoy equal opportunities in the city’s flourishing culinary scene.

Sohela inherited the restaurant from her father, Abo Sohel, in 1993. “It was hard to be the first woman running a hummus restaurant in the Old City. Hummus is a tradition in Acre. At first my family was against it,” said Sohela. “But my siblings supported me. After my father passed away, my mother became ill and one of my siblings went blind. It was up to me to uphold our family’s recipe.” In 2005, Sohela won first prize in a national competition hosted by Israeli celebrity chefs Oren Giron and Moshe Segev. She was awarded a plaque with a golden pita and her hummus was deemed best in Israel.

“Living side-by-side, working and eating together, this is how each generation learns to get along”

According to the Israeli Central Bureau of Statistics, almost all of Acre’s Old City residents are Arab, around 20 per cent of the whole city’s population. On weekends the neighbourhood is packed with people from across the north, evenly split between Arabs and Jews. They flock to restaurants in the Old City, from hip new venues to traditional, family-owned places.

David Harari, an official responsible for tourism in Acre, says the city annually attracts 100,000 tourists from all over the world. It’s home to numerous holy sites, including the Bahá’í Gardens at Bahjí, Saint George’s Church, the Jezzar Pasha Mosque and Or Torah, a Tunisian synagogue covered in art mosaics.

Sohela’s hummus restaurant is now a multicultural watering hole for northerners and tourists alike, Christians, Muslims, Jews and Druze. “My hummus is like a flower,” she says. “I am a Muslim woman, but a flower is not only the petals. The local farmers who supply ingredients and the customers I feed come from every community in Israel. When people eat good hummus together, they don’t argue. They shut up and eat happily.”

Today, Sohela says she enjoys equality with all the city’s businessmen, that now the only problem is finding parking near their busy restaurants. “I can’t say if I have the same rights as Jewish business owners. I’ve never been Jewish,” she says. “But I don’t feel any discrimination. Only politicians separate us into categories. In Acre, we are simply neighbours.”

Across the street, fellow hummus chef Issa Makhol, a Maronite Christian, agrees Acre’s culinary scene fosters peaceful coexistence. Makhol inherited his hummus restaurant from his grandfather who first opened the business in 1950. “This atmosphere could never happen in Jerusalem or Tel Aviv,” he says. “It is unique. Our diverse communities are equal and have a great relationship.”

Makhol believes routine non-threatening interaction fosters Acre’s unique climate of tolerance. “Regardless of history,” he says, “living side-by-side, working and eating together, this is how each generation learns to get along.”

A lot has changed since Sohela first took over her father’s restaurant across the street. Today, Makhol’s wife and mother also work at his family restaurant. He feels comfortable leaving the business under their control when he is away; it feels perfectly natural.

Acre’s economy thrives off of independent gourmet businesses, overwhelmingly owned by minorities. Sohela argues there isn’t any universal formula for replicating this economic empowerment. “Every woman must decide her own success. Maybe one wants a restaurant and the other wants to stay home with the children,” she says. “Success is not the number of women owning restaurants. It is that each exercises the right to choose for herself.”