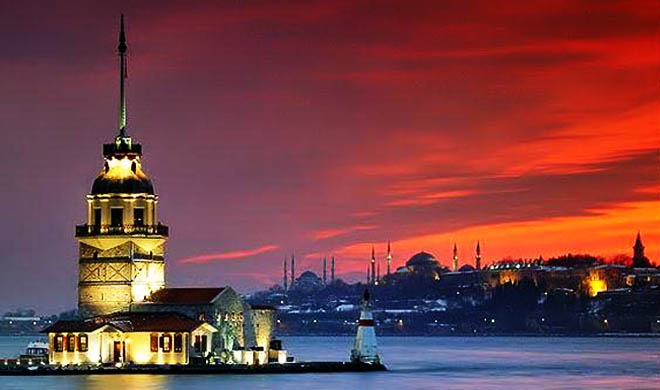 I love Istanbul because it stands against what is portrayed of East and West today: two different worlds, far away from understanding each other, writes Aslihan Agaoglu about her hometown.

The traffic is hectic, as always, and I am in my car trying to cross the Fatih Sultan Mehmed Bridge, aptly named after the Ottoman Sultan who conquered Istanbul in 1453, at the age of 21. It’s a sunny day; the blue sky stretches over and meets the blue waters of Bosporus at the horizon. Ahead I can see the big yellow sign that says, “Welcome to Asia.” I am literally crossing continents to have lunch at my grandma’s house and I’ll be back home for afternoon tea. This is possible in one city in the world: Istanbul.

I was born and raised in Istanbul and I have to admit that it is not the easiest place to live in. It is overpopulated, with over 13 million people according to the Turkish Statistical Institute, it is noisy, polluted and has a tendency to test your patients on a regular basis. But it is also a magical city, bursting with stories and history, that never creases to surprise you, which might explain why so many people want to live here.

When I was in primary school, learning about the life of Mehmed II, Mehmed the Conqueror as he was known, our teacher took us on a field trip to Hagia Sophia. I still remember the fascination I felt the first time I walked through its door and stood under the magnificent dome. Hagia Sophia, meaning ‘Holly Wisdom’, served as an Orthodox patriarchal church from 360 to 1452, until Mehmed II conquered the city. When he saw Hagia Sophia, he must have been just as fascinated as I was because he did not demolish it, instead he converted it to a mosque and attended its first Friday prayer on 1 June 1453.

Hagia Sophia, or Aya Sofya as it is known today, became the first imperial mosque of Istanbul and it served as inspiration for many other Ottoman mosques. It is considered the archetype of Byzantine architecture and is said to have changed the history of architecture. When you walk in, the grand structure takes your breath away and even though it was converted into a mosque, it still gives you the feeling of a cathedral with its basic skeleton. It was made a museum by Mustafa Kemal Ataturk, the founder of the Republic of Turkey on 1 February 1935 and continues until this day to serve as one, embodying the essence of both Christianity and Islam. In my opinion, the “Holly Wisdom” stands today to represent tolerance in the city that is literally the bridge between Europe and Asia.

If you don’t want to get stuck in traffic, and in Istanbul you are likely to at any hour during the day, your best chance for crossing over to the other side of the city is by sea. You can take one of the famous steamboats, order your tea in one of the traditional thin-wasted glasses and enjoy the scenery for twenty minutes until you arrive. You’ll get to see the old wooden mansions, painted red, yellow and white juxtaposed along the shore line, the Dolmabahce Palace and of course that tiny little building in its very own tiny little island, standing between two continents. That lonely looking building is the Maiden Tower, now a restaurant and very popular for romantic marriage proposals, but there is a myth behind it that is known by almost all Istanbullians.

The Maiden’s Tower belongs to the medieval Byzantine period and legend has it that it was built by a Sultan to protect his beloved daughter from an awful prophecy. One day, an oracle shows up at the Sultan’s palace and prophesises that a venomous snake will kill the Sultan’s daughter when she turns eighteen. The Sultan, desperate to keep his daughter safe, orders his architects to build a small tower that would stand between two lands, hoping no snakes can reach his daughter there and sends her to the tower before she turns eighteen. On the day of her eighteenth birthday, the Sultan brings his daughter a basket of exotic fruits but little does he know that there is a venomous snake hiding beneath the basket. When the princess reaches in to take a fruit, the snake bites her finger and she dies, just as the oracle prophesised, in her father’s arms.

Even if you are not the one for myths and prophesies, Istanbul has something magical to offer. How about a visit to the Istanbul Archaeology Museum, where over one million objects are represented, almost all of the eras and civilizations in world history? You can see parts of statues from the Temple of Zeus, The Troy exhibit, artefacts from the early civilizations of Anatolia, Mesopotamia, Arabia and Egypt and my personal favourite: the world’s oldest love poem!

The inscription on the tablet, according to the Archaeology Museum:

“Dating from the 8th century BC and belonging to the Ancient Babylonian Era, is described as the world’s oldest known love poem. According to the Sumerian belief, it was a sacred duty for the king to marry every year a priestess instead of Inanna, the goddess of fertility and sexual love, in order to make the soil and women fertile. This poem was most probably written by a bride chosen for Shu-Sin in order to be sung at the New Year festival and it was sung at banquets and festivals accompanied by music and dance.”

Today, people from all kinds of ethic, religious and cultural backgrounds live under the same sky of this ancient city. History gushes out from every corner, a common history that comes together like a mosaic with many colours, and it tells us that we are connected to each other through this shared history. I love Istanbul because it stands against what is portrayed of East and West today: two different worlds, far away from understanding each other. Istanbul shows me that there could indeed be a bridge between East and West, a better understanding and a chance to make a better history for the next generations.