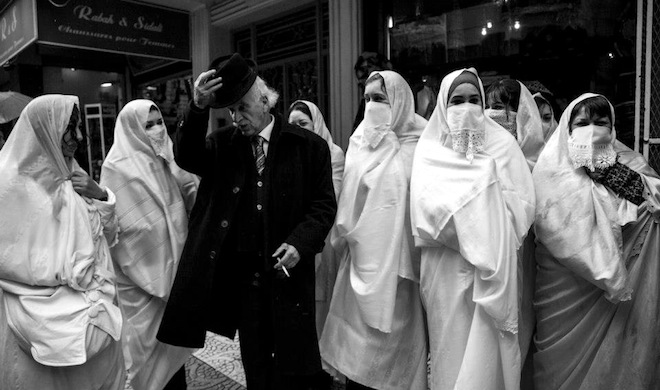 In an age where discussions on religion and women's rights spread like wildfire in the digital world, some have started to look back in time. In Algeria, women have found their ideal of the motherland – the Hayek.

The Hayek is a traditional Algerian garment, usually associated with the Casbah area of Algiers, although variations of the design exist from all over Algeria. Usually, this white cloth garment was simply wrapped across the body with an aadjar, a veil that sits on the face displaying the eyes only. Algerian culture saw it as a combination of modesty and elegance. Yet this graceful garment is now but a thing of nostalgia.

There has been a slow and gradual disappearance of this dress throughout the country. While you could once see lots of women wearing it in the streets, today it is somewhat a surprise when you do.

The Hayek, beyond its traditional function as a dress, was for many an act of Algerian resistance against French colonial policy. The Hayek was an indelible imprint of its historical function of Algeria; its intensity immortalized with the soul of the Algerian nation, while reaffirming its identity and determination in the face of colonial oppression.

Islam has been used as a parallel to this garment, suggesting that the demise of this traditional item comes with the westernisation of a country. Lest we remember however that the Hayek is not a symbol of Islam but in fact a tradition brought into Algeria through the various empires and colonisations of the region. Its origins, though not concrete, seem to swing between Spanish rule, Ottoman and then weak ties to Islam from the sixteenth century onwards. The idea of modesty is not solely an Islamic trait, but more so found in the morals and ethics of Judeo-Christianity, both of which have history and presence in North Africa.

Several have cited an Arab Spring of females within the past few months in Algeria, with a strong desire and want to return to the traditions of the land. During the spring of 2013, many female students wore the Hayek to university, encouraging other female students to do so too, which then went viral via Facebook. A celebration of Algerian female art was being recognised. Following this, they donned the Hayek in its birth place, La Casbah.

The main attraction behind this sentiment was to maintain a cultural tie with their history. For many also, it was to run in the opposite direction of the black niqab style Islamic dress of Saudi Arabia. Describing it as a ‘dark, black Wahhabi movement’ that did not fit in with their ideal of Algeria.

The Hayek has also found solace in being immortalized by the film The Battle of Algiers. The Hayek is seen over and over in the film highlighting the role of females in the Algerian war of independence. Hassiba Bouali is shown with the Hayek, part as a disguise and part demonstrating the striking illustration of women’s participation in the independence of the country.

For many residents of Algeria, the charm of the Hayek seems to be missing from their streets. The memories and ideals it resonated of yesteryear in Algeria seem distant. The introduction of more standard, westernised symbols of dress has hidden a gem in Algerian culture. One does not have to go far but to look simply at photos taken of the women of Algeria during the 1930’s; all adorning Hayek’s to exude splendour.