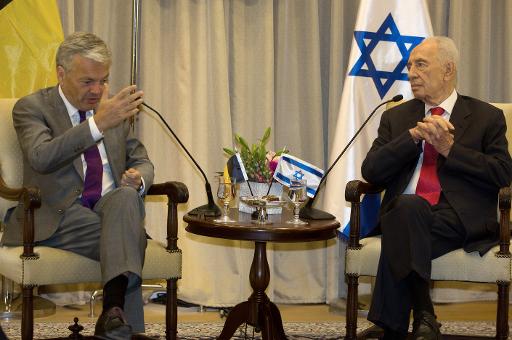 Countries across the Middle East will want to acquire nuclear weapons if Iran is allowed to develop an atomic bomb, Israel’s president told a French newspaper ahead of a meeting Sunday with his French counterpart.

Shimon Peres said he appreciated France’s firm stance in negotiations earlier this month on Iran’s nuclear programme, adding that there should be “no let-up” in the international pressure on Tehran.

“We are convinced that if Iran manufactures its bomb, all the countries of the Middle East will want to follow suit,” the Israeli president told French weekly Le Journal du Dimanche.

Peres will meet Francois Hollande on Sunday when the French president begins a three-day visit to Israel amid renewed efforts by the West to curb Iran’s contested nuclear programme.

His comments echo those of Israeli Prime Minister Benjamin Netanyahu, who urged France in an interview Saturday to stand firm in international negotiations.

Israel and world powers suspect the Islamic republic’s programme of uranium enrichment to be a covert drive to acquire a nuclear weapons capability, an allegation vehemently denied by Tehran.

France took a tougher line than its Western partners in Geneva talks earlier this month aimed at resolving the impasse.

Iranian hardliners blamed France for scuppering a deal that would have given the West guarantees Tehran was not acquiring atomic weapons in exchange for an easing of crippling economic sanctions against the Islamic republic.

Israel — widely thought to be the Middle East’s sole albeit undeclared nuclear power — has repeatedly warned its Western allies they were being too soft with Iran.

The P5+1 negotiating with Tehran is made up of the five permanent members of the UN Security Council — Britain, China, France, Russia and the United States — plus Germany.

The talks are due to resume in Geneva in the coming week.