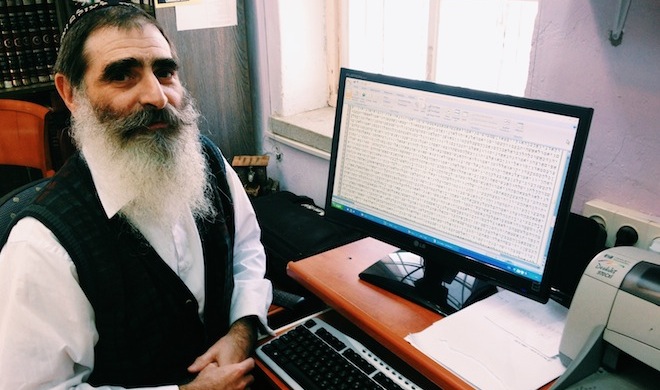 Haifa-based Katie Gonzalez decided to leave her notions of religious authority behind and caught up with a passionate Kabbalah-practitioner in the spiritual center of Israel.

It’s no secret that Israel is a religious country, and Tsfat is the spiritual center. Nestled atop a mountain with sprawling views overlooking the contested land, Tsfat seems more myth than reality upon first glance. Instead of the diversity comprising many of Israel’s mixed cities, the—like it or not—blend of Jews and Arabs that characterizes much of the region is lost in Tsfat. Instead, skullcaps and sideburns, and ankle-length long skirts for women, dominate the town.

I found Rabbi Eliyahu Kaye at Ascent Tsfat, the Kabbalistic center where he has worked for over 20 years. He was late to our appointment—the individuals he met with prior to my arrival simply didn’t want to leave. Upon exiting, the husband and wife couple exclaimed how they were “blown away” by what they had just heard, how Rabbi Kaye was “special.”

I grew up Catholic in an unforgiving Christian community where hypocrisy seemed standard from Sunday service to Sunday service, so I approached Kabbalah with the same tepid and distrusting feelings I’ve fostered for organized religion since. When speaking with Rabbi Kaye, I kept expecting him to break, to revert to the bullish personality of the religious leaders I had formerly known. Rabbi Kaye signs his emails with “Moshiach NOW!” (“Messiah NOW!”) I kept expecting him to add, “but only for some!”

But the fact is, Rabbi Kaye’s enthusiasm and faith never waivered throughout our initial 2-hour interview, or during the hours I spent in his office in Tsfat later that week. If the exiting couple was excited by what he had revealed to them in their concurrent sessions, then Rabbi Kaye is excited and enthused every day, all the time.

Originally born in the United States, Rabbi Kaye, 52, has let his passion for Kabbalah—a “way of life”—translate into a successful and busy enterprise at Ascent. He meets with a “few hundred” clients a year, who engage him in person, over the phone, or via Skype. He has been interviewed for television and radio segments on the popular Kabbalah (including a Finnish clip that was produced in advance of a visit from the famous Kabbalist, Madonna); he hosts seminars and lectures at Ascent; and he famously reads and analyzes individual Kabbalah Codes.

Rabbi Kaye developed his own method for reading Kabbalah Codes using the philosophy of Lubavitch Levy, the founder of the Hasidic Chabad movement. The Kabbalah Codes purportedly reveal to an individual his or her “soul power, the soul tendencies, the power and personality traits of the individuals,” Rabbi Kaye said. According to Kabbalah, each person has a unique mission in life. By getting a better understanding of his or her personal Kabbalah Code, people can get a more complete sense for the “general direction” that their life path should take.

“I want to say in bold letters that I do not have the ability to tell the future,” Rabbi Kaye said. “I can’t tell you how many people come into my office, and they’re looking and looking, and they say: ‘Rabbi, where is your crystal ball?’ I don’t have a crystal ball and I don’t use tarot cards. According to the Torah, it’s forbidden to deal with these things.”

Instead, Rabbi Kaye has embraced the 21st century, and uses a software program installed on his desktop computer.

For each client, he assembles three pieces of information: their name, their birthday, and their birth portion. The birth portion, or the section of the Torah that was read during that individual’s birth week, is achieved by converting a person’s known birthday to a date on the Hebrew calendar. Once Rabbi Kaye has the information, he runs the program, which searches for letters of the client’s Hebrew name in intervals. When revealed, Rabbi Kaye analyzes the phrase found to be corresponding with each letter, and applies the sentiments to make sense of the person’s “soul powers and soul tendencies,” he said.

The key to the Kabbalah Codes are the person’s name, or “spiritual pipeline,” according to Rabbi Kaye. Even the act of naming a child is a “minor prophecy,” in which human beings are imparted with “energy and powers” through each letter in their name, he said. But it is the individual’s task to determine how God intended this energy and powers to be utilized, which is where the Kabbalah Codes come in.

The key to the Kabbalah Codes are the person’s name

In reading the codes, Rabbi Kaye has worked with both Jews and non-believers. What the Kabbalah Code tells an individual, Rabbi Kaye says, is applicable across faiths, and finds its strength in a universal human trait: “curiosity.”

“It’s something that is common to any human being,” he said. “There are two major motivations: the fact that this is a personal concept that has to do with the individual. A person always wants to have greater knowledge about themselves. And second of all, it enables them to obtain the tools to change their future for the better. Who doesn’t want to see a greater success and a more happy future than they have already?”

Yifat Jaffe Gill, the founder of business and branding consulting company SmartStart, is one such client whose curiosity led her to first seek Rabbi Kaye’s services over seven years ago.

The analysis he drew from her personal codes, Gill said, was “like dynamite,” helping to explain some hardships in her life and revealing skills that she could apply to be more successful in her professional work.

“It wasn’t revolutionary, but it was powerful,” Gill said. “It gave me a lot of power to continue because (Rabbi Kaye) gave me the sign that I was on the right track. I now understand what it is I need to do and why God gave me that power.”

The interpretation of Gill’s codes also led her to become religious, now opting to observe Shabbat and remain kosher, things she did not do before meeting with Rabbi Kaye.

“You choose the best things in life when you go with the blessing,” Gill said. “So I chose to go from a non-religious woman to a religious woman.”

“Most of the things were familiar,” Mei said in an email to Your Middle East. “Nevertheless, most of my potential was still hidden, and he put in on the table, in front of me. It was an amazing moment.”

Rabbi Kaye said that during the Kabbalah Code analysis, he tries to present the information he finds in an objective manner, like a “connect the dots” game.

“I’m not coming to convince anybody,” Rabbi Kaye said. “I just process the information. But beyond that, I don’t say that this is a must or that you have to do anything.”

“It encouraged me to think both critically and positively about myself”

Rabbi Kaye even read my personal codes, in an insightful 50-minute long session during which he assessed my character traits simply through reading my Torah portion, and particularly the phrases that contained the letters of my transliterated name.

I’d like to think of the reading as very accurate—he even uncannily and unknowingly stated a nickname that a professor had given me in college—but it’s difficult to tell if the personality that Rabbi Kaye was citing was actually me, or just the person I would like to be.

Either way, the Kabbalah Code reading was a nice point of inflection—as Rabbi Kaye listed my “soul powers” as the Torah dictated them, it encouraged me to think both critically and positively about myself, which is a useful exercise for everyone.