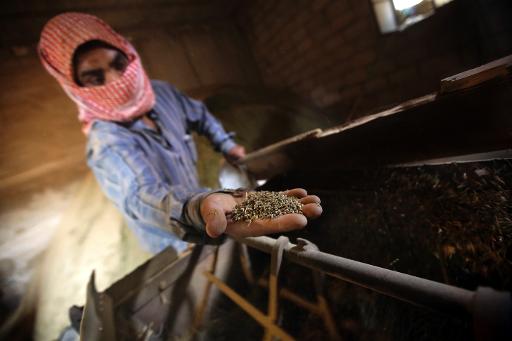 Lebanese marijuana grower Abu Sami is practically rubbing his hands together with glee: the Syrian conflict has paralysed authorities at home and left the nearby border virtually uncontrolled.

“This year, the harvest was abundant, and the authorities have left us alone because they are otherwise occupied,” he tells AFP in Lebanon’s eastern Bekaa region.

In the past, the Lebanese army would descend annually to destroy some of the illicit crop, but this year the harvest has gone untouched.

The area shares a long, porous border with Syria and is a stronghold of the Shiite Lebanese movement Hezbollah, which is fighting alongside the Syrian regime against a 32-month-old uprising.

After the harvest in Abu Sami’s bucolic village, at the foot of an arid mountain, marijuana is brought to buildings where it is dried and processed into hashish.

All along the winding roads of the Shiite hamlet, men and women work on the crop behind half-closed curtains, and defend the industry as their only source of employment.

During Lebanon’s 1975-1990 civil war, Lebanese hashish, which is known for its quality, fed a flourishing industry that generated hundreds of millions of dollars a year in income.

Hashish is a cannabis product derived from the resin of the plant, and produced in large quantities in the Bekaa.

Under pressure from the United States, Lebanon has launched eradication campaigns, and in past years, the army bulldozed thousands of hectares of cannabis.

Farmers have often taken up arms to defend their crop — growers fired a rocket at an eradication team in 2012 — and call for the legalisation of what they say is part of their ancestral culture.

But this year, there’s been no sign of the army.

“The state is immersed in problems related to Syria and doesn’t want to open a new front. Otherwise they would have come down hard on us,” says Afif, a villager.

Government officials admit as much.

“There was no destruction of growing this year… The Syrian crisis played a major role in that,” Joseph Skaff, chief of Lebanon’s office for countering drugs, money laundering and terrorism, told AFP.

For Abu Sami, Afif and others working in the industry, Lebanon’s instability and the war raging in Syria are blessings in disguise.

In a bid to stem the flow of fighters and weapons from Lebanon, Syria has replaced its border guards with army troops who are too busy fighting to patrol.

And routes back and forth across the border to Syria have increased as refugees and rebels chart new paths.

“Nowadays, anything goes because it’s chaos on the Syrian side,” says Abu Sami.

“Where there is war, drugs follow,” he adds, contemplating a mound of sifted golden brown cannabis grains on the floor of a shed.

A few metres (yards) away, the leftover stems are burnt to remove any trace of the activity.

The farmers say local and foreign demand for their crop is up more than 50 percent in the last year, with “the majority of the merchandise being sold in Syria,” which has become a crossroads for drugs destined for Europe and elsewhere.

According to Abu Ali, a local resident, traffickers from Syria buy 30 to 100 kilogrammes to take on to neighbouring countries.

“From Turkey, they sell to European traffickers, and from Iraq and Jordan, they sell it to the Gulf countries,” he says.

“There are also fighters in Syria that buy in small quantities for their own consumption,” he adds.

The prices are high, but the abundance of the crop this year has pushed them down. A kilogramme that used to fetch $1,000 now sells for $500.

No one wants to comment on the role of Hezbollah, which publicly opposes the drug trade but is accused by critics of turning a blind eye to the thriving industry in one of its strongholds.

The trade has also drawn in Syrian refugees in Lebanon, including Ibrahim, who left his beet field in the Kurdish area of Afrin in northern Aleppo province and produces hashish in Abu Sami’s village.

“Because of the war, the number of Syrians working here has doubled,” the 32-year-old says, his voice nearly drowned out by the sound of the sifting machine he operates for around 12 hours a day.

“It’s very profitable,” says Samer, another Syrian from Afrin, who says he makes $33 a day, instead of the $13 he was earning in a Beirut vegetable market.

“It supports entire families,” says Afif, a father of three, who says his two hectares bring in tens of thousands of dollars a year.

The most skilled traffickers can reportedly haul in $1.5 million a year.

“Here there’s not a plant that survives except hashish. It’s a gift from God. Can we oppose God?” Afif asks with a laugh.