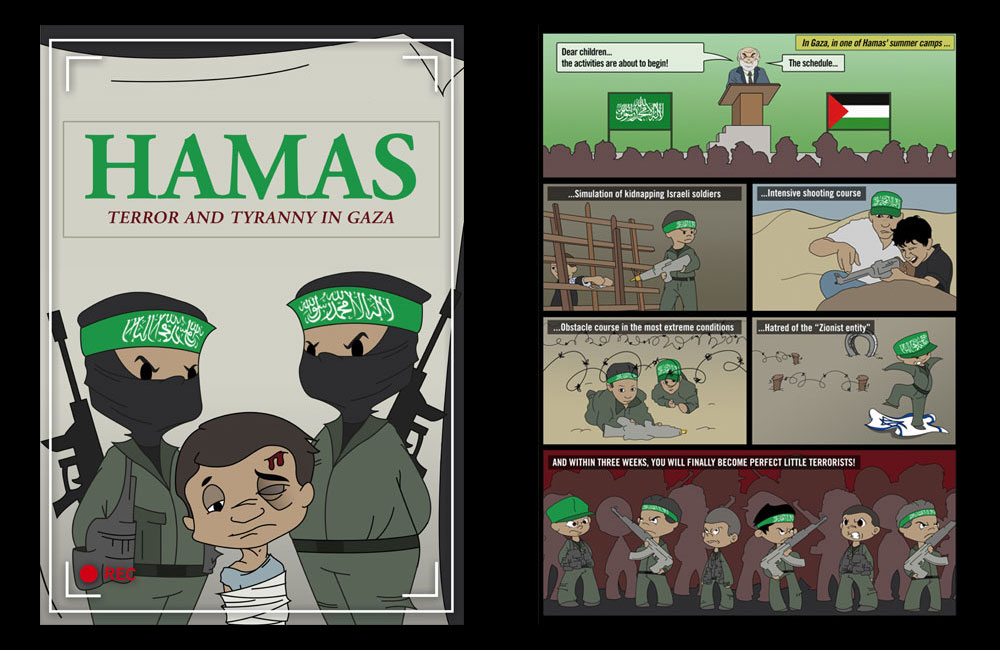 The Israeli military has released its first comic book portraying how “Hamas has vilified the Jewish people, indoctrinated Gaza’s children and attacked Israel with suicide bombings and rockets.” The comic aims to show “the terrorist organization like you’ve never seen it before,” states a blog post on the army’s website.

The book, “Hamas in Comics: Terror and Tyranny in Gaza,” includes depictions of a Hamas’ summer camp for kids, where the students are asked, “Are you ready to learn to be the best killers?” It continues with Palestinian kids being brainwashed to kidnap Israeli soldiers, put through intensive shooting courses and learned hatred of the “Zionist entity.” According to the comic book “within three weeks, you will finally become the perfect little terrorists.”

The last page gives the reader a clear message, written with capital letters, it says, “The IDF will do everything in its power to stop Hamas’ terror and protect the people of Israel”

IDF ‏@IDFSpokesperson
Even when #Hamas is in comic form, they’re still no joke http://www.idfblog.com/2013/11/17/hamas-comics-terror-tyranny-gaza/ …

But the reactions to the release have been mixed. Some have called it propaganda, surreal and others call for outrage…

David Oranje Ø¯Ø§ÙÙØ¯ ‏@DavidOranje
@IDFSpokesperson even for obvious hasbara, this is pretty ridiculous and horribly one-sided.

While others welcomed and supported the initiative…

Moshe Kwiat ‏@mokwi8
If it weren’t so serious, it would be funny. Take a look RT @AvitalLeibovich: First comics in our blog- about #Hamas http://www.idfblog.com/wp-content/uploads/2013/11/1ere-couveng-2.pdf …

Arsen Ostrovsky ‏@Ostrov_A
Smart. Simple! Everyone will get! via @IDFSpokesperson: #Hamas in Comics: Terror & Tyranny in #Gaza. http://bit.ly/1bG8oed . @LTCPeterLerner