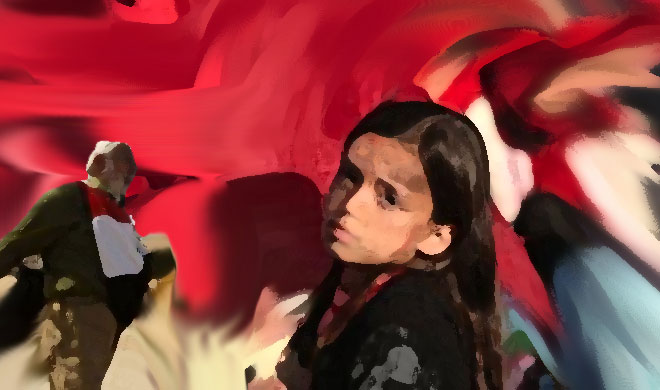 She was sleeping safe and tight, in her own bed, in her own room. She felt someone was atop of her and woke up, only to realize it was her uncle attempting to rape her.

Reem’s story is one of many incest rapes that happen on a daily basis in the Middle East. Yet, these stories are rarely addressed because of the sensitivity of the issue in predominantly conservative societies, and of the fear that the family where incest has occurred will be socially disgraced.

In light of this, this investigation aims to address incest rapes in Egypt, Lebanon, and Jordan, and to document the increasing rates of incest within these three societies. Keeping in mind that silence on these crimes is common, the legal, social, and psychological aspects of incest in each of them are closely examined.

“Any verbal, physical, or sexual harassment from a person on another within the same family is identified as incest,” explains Ahmad Youssef, the founder of Bann Centre for Social & Psychological Consultations and Training in Lebanon. Youssef asserts that even if sexual contact did not take place, the incident would still be considered an incest crime.

“Laws in the three countries still do not address incest rapes sufficiently to put an end to them.”

Though there are no available statistics specific to incest rapes, many figures suggest that it is an increasing problem in all three countries.

In Jordan, a study for the National Council for Family Affairs and the Ministry of Social Development in 2010, showed that 90% of females that experience domestic violence are sexually abused, and that in 60% of the cases, they are exposed to incest. Another figure by the Family Protection Department shows that 54% of domestic violence cases in Jordan are cases of sexual harassment.

In Lebanon, figures have shown that 54% of children have been physically harassed, and another 16% have been sexually harassed, according to a 2008 study by KAFA. A more recent project by the Lebanese Women Democratic Gathering suggested that more than third of the assaulted women in Lebanon are sexually abused.

Similarly, BBC and Al-Hayat reports suggest that 80% of women and 18% of children in Egypt have experienced sexual harassment. Noticeably, in 35% of the cases where the sexual harassment involved children, the harasser was a relative of the child.

This assumed increase in the rates of harassment and sexual abuse is aligned with rising figures of unemployment, drug addiction, and living expenses, which all are factors that contribute to incest, as documented in a study on the subject by Dr. Ahmed Majdoub in 2003. Yet, laws in the three countries still do not address incest rapes sufficiently to put an end to them.

Both Jordanian and Lebanese laws do have chapters that tackle incest rapes, while the Egyptian law still refers to the articles on defilement and rape when an incest rape case is at court.

Articles 490 and 491 of the Lebanese Penal Code state that anyone who commits incest is imprisoned for a minimum period of 2 months and up to 2 years. If the committer is the guardian of the victim, the imprisonment period may be increased to 3 years, and their authority over the victim is no more legitimate. Noticeably, incest rapes in Lebanon are less penalized than rapes where the committer does not relate to the victim, in which case the minimum period of imprisonment is five years.

In Egypt, most sexual abuses are classified under defilement rather than rapes, and thus slightly penalized. This is due to the limitation of article 267 of the Egyptian Penal Code, where “only penis-in-vagina intercourses are classified as rapes,” explains Mustafa Hassan Hamdi, an Egyptian lawyer.

Distinctively, the Jordanian civil law addresses in its 22ndarticle the newborns resulting of an incest relation. Yet, just as the Lebanese law, the penalty for incest does not exceed three years of imprisonment. Furthermore, if a woman conceives due to incest and intentionally kills the baby, she is criminalized.

The Lebanese law, however, tackles the investigation of incest cases more comprehensively, as it does not restrict the ability to bring a case to court to the relatives of the damaged person, as is required in Jordan. Rather, prosecution of incest cases in Lebanon proceeds without the need of formal sues from a relative. A further loophole in the Jordanian law is that victims of incest can give in their right to prosecution, which happens at many instances, explained Dr. Hanan Al-Thaher, Head of the Legislation and Policy Department at the National Council for Family Affairs in Jordan.

The common feature when discussing incest in Egypt, Lebanon, and Jordan is that people stay silent on incest relations that may be prevalent at their own houses or at their neighbors’ and acquaintances’. Although statistical indications suggest that incest is increasing, sociologists and psychologists agree that the reported incest cases constitute barely 10% of the actual incest cases in the society.

The three societies are to a considerable degree conservative and speaking of incest leads to stigmatizing the concerned family in the society. This is why some mothers remain silent of incest rapes against their own daughters.

“It is impossible for a mother not to notice that there is an incest relation in her house, and the silence of these mothers is thus compliance to the rapist,” notes Ahmad Youssef.

Another important reason behind the reticence to report incest is that in many of the cases, the committer has an authority over the victim. The Director of Programs at the Sisterhood Is Global Institution in Jordan, Rana Abu Sindos, says that in many cases, those who commit incest are the persons supposed to protect and care for the victim.

“The society accuses the female of giving the green light for any sexual relation, even an incest relation,” adds Abu Sindos as a further reason for not reporting these crimes.

In the case of Reem, featured at the beginning of this piece, the first question that the young lady was asked by her parents was, ”what were you wearing?”

The spiral of silence around incest has negative effects both on the society as a whole and of course on the victims themselves. Of the severest consequences is the birth of unwanted newborns, aside to the murder of women who conceive of incest under the claim of honor crimes.

Negative consequences on the society include the risk that victims turn to prostitution, or even become new incest committers. Dr. Hanna Abu Shahba, who holds a PhD in Clinical Psychology, recalls a case in Egypt where a brother raped his sister, and the sister in turn raped her younger brother.

The basic social effect of incest is the disintegration of the family and the collapse of relations, as the Jordanian sociologist Dr. Sabry Arbihat explains. This shift in the familial patterns from love/protection to abuse/violence affects the incest victim psychologically. For instance, Reem explains that for five years after her uncle’s sexual abuse, she experienced nightmares in which someone was raping her. The nightmares continued until she finally saw a psychologist.

Ahmad Youssef asserts that psychotherapy helps incest victims to heal fully. On the other hand, Cynthia Chammas, a psychologist at Home of Tenderness women’s shelter in Beirut states that the severity of certain cases make it impossible for some victims to totally recover. Chammas mentions the case of a young lady who escaped to Home of Tenderness at the age of 18, after having experienced sexual abuse and rape from her grandfather since the age of 4 and the denial of her parents. After the girl gradually recovered, she had to apologize to her grandfather and parents so she would be allowed to live at her house again.

“Even if this lady substantially recovered, and she is a virgin again after a hymen replacement surgery, no one stood up for her rights even decades after the incident,” Chammas notes.

The presumed silence on incest rapes is in line with the sensitivity of discussing topics related to sex in the three societies. In addition, the loopholes in the legal texts in all three countries neither stop the committers nor regain for the victims their rights. Until comprehensive laws are implemented, the rates of incest rapes will continue to increase and with them the continued spiral of silence.

This investigation was prepared under the support and guidance of the International Center For Journalists.

ALSO READ: Time to confront child abuse in the Kingdom