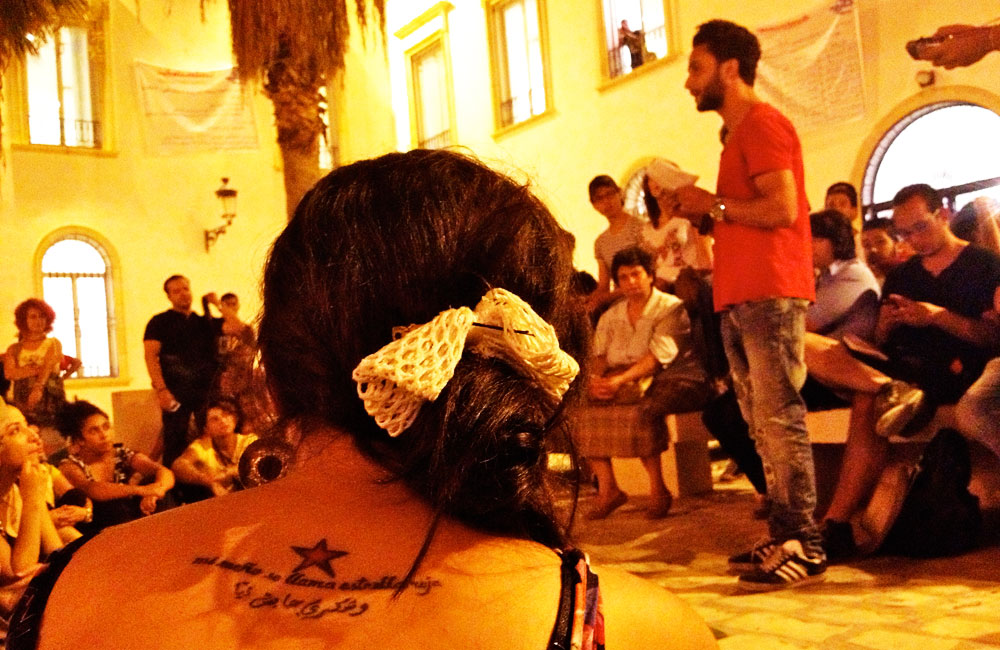 ”The streets are talking to me: "No control over these elections, who does deserve your vote? And if you notice that they're cheating, what would you do? Would you go to Mr. Justice?”

Shams reads a few sentences from one of her poems, her voice is not loud but determined when she says: Moi je n’irai pas voter!

Two years ago Shams Radhuouani Abdi wrote down why she was not going to vote in Tunisia’s first free democratic election since its independence 1956. Since then a number of her poems have expressed scepticism against Tunisia’s political development, especially recently when Tunisia is facing its worst political crisis since the revolution.

“My poetry is more political and social but at the same time psychological,” the 21 year-old student, political activist and feminist tells me when we meet at a café in the very heart of the Tunisian capital.

Street Poetry is a place where different ideologies and religious standpoints come together. It attracts anyone from students and workers to the unemployed, a place where people can express themselves with freedom.

“And can you, can you express yourself freely?” I ask.

“Yeah, I can. Of course,” Shams says firmly but then adds, “but I do not guarantee the result of my freedom, but I do it anyway.”

But there are limitations. One poem is too controversial to be read at Street Poetry. “I have written a text named, ‘I love you and I love your God’ but in Tunisia to say your God is to curse your God, it is something really bad.” The poem, which is not intending to be provocative but a linguistic play with words caused Shams problems at university when Islamists started to spread rumours about her. But to avoid further misunderstandings the poem has never, and will never, be read in public.

“When the people took to the streets in 2010 the emblem was ‘Jobs, freedom, patriot dignity’  not ‘Mosques and mini skirts.’”

Although Tunisia’s current state of freedom of expression has raised concern from organisations such as Reporters Without Borders, Shams is not frightened.

“I don’t believe in carefulness very much,” she says, “I mean art, like poetry, if you try to put up barriers those barriers will not stay the way they are, but they will keep increasing.”

The assassination of the Tunisian politician Chokri Belaid in February was personal to Shams. The opposition leader was not only a role model but also a dear friend. A poem was written for Chokri’s commemoration, an invitation to Tunisians to rise and continue the struggle, to feel encouraged and strengthened:

“The idea is a ticking time bomb
… original ideas do not need covers
The idea’s living underground
Mine underneath, if you walk on it it explodes
The idea cures disease… And aches
It is born where there is no electricity
It is then written in text
It dives deep into the spirit and, and then comes out as creativity”

Like many other Tunisians Shams is disappointed with the political and economic development since the revolution.

“This is not the change we wanted, when the people took to the streets in 2010 the emblem was ‘Jobs, freedom, patriot dignity’ not ‘Mosques and mini skirts.’”

She falls quiet but then adds as she glares at the busy avenue of Habib Bourguiba, “the change hasn’t come at all.”

When I ask her if you can trust the police she says, “No, never, never ever!” She says it so loud people turn around to look at us. I quickly glance in the direction of the Interior Ministry, which is only a few meters away from where we are sitting.

But despite Tunisia’s many challenges Shams is optimistic about the future, she lives by Mehdi Amel’s philosophy: “You’re not defeated as long as you resist.” Her determination is fearless, “Resistance goes hand in hand with life, we live the way we want to live.”

Shams even has a tattoo in memory of Chokri, inked on her upper back it says: “Chokri lives in me.”