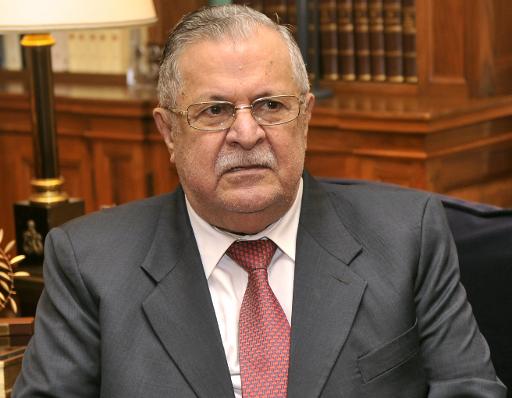 Iraqi President Jalal Talabani is on the “road to a full recovery” from a stroke he had last December, a statement from his office on Wednesday said.

Talabani, who has played a key role as mediator in Iraq’s fractious politics, has been in Germany for treatment for almost a year.

His doctor confirmed the “improvement of President Talabani’s health”, and said he had “passed an important stage” in his treatment, the statement on the presidency’s website said.

Talabani’s wife Hero, shown sitting with him in photographs accompanying the statement, confirmed the “stability of President Talabani’s health”, it said.

This “is a call for optimism and confidence in the progress and development of his excellency’s health situation, on the road to a full recovery.”

The statement said the accompanying pictures were taken on December 6 and 8, but that could not be independently confirmed.

While Iraq’s presidency is largely ceremonial, Talabani made it into something more, seeking to bring together feuding politicians, Sunni and Shiite Muslims, Arabs and Kurds, during political crises that have plagued the country.

In his absence, the political fortunes of his Patriotic Union of Kurdistan have fallen, as it came third behind an opposition movement in the autonomous Kurdish region’s parliamentary election.

The results shook a decades-long duopoly on power in the three-province region, whose politics have long been dominated by the PUK and regional president Massud Barzani’s Kurdistan Democratic Party.

The KDP came first with 38 seats, the opposition Goran movement came second with 24 and the PUK won 18.

The PUK has faced increasingly tough competition from Goran as well as Islamist and communist groupings in its home base of Sulaimaniyah — challenges exacerbated by Talabani’s prolonged absence.