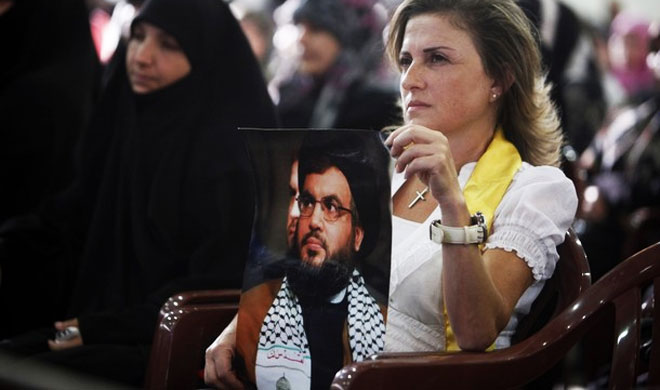 Victor Argo has met two women from “Hezbollah land” to learn about their views of the organization that is considered a terrorist group by the West and a liberation movement by its supporters.

Not a single week is passing by without an article or an analysis published about Hezbollah. Whose agenda is Hezbollah pushing: its own, Iran’s, or is the party working for the best of Lebanon as a whole? Who was Hassan al-Laqis, the Hezbollah commander assassinated last week in Beirut, and who killed him? Are Hezbollah’s supporters brainwashed and oppressed by a rigid party doctrine?

These analyzes are mostly written by outsiders not familiar with the situation in the south of Lebanon, Hezbollah’s core territory. What is it really like to live in ‘Hezbollah country’? How is life as a woman under Hezbollah rule? To get a better understanding I was able to interview two women from South Lebanon, Rola and Sana’a.

“My name is Rola, I am 34 years old, married with three children. I taught social studies for four years and have gone back to university this year, studying English literature.

I am not a party member, and I have never been active in a Hezbollah organization, however I am a huge sympathizer. What connects me to Hezbollah is the cause we both believe in, the fight against the Israeli occupation. I believe that it is our right to defend our land and our existence. Hezbollah is one of many resistance movements that began in the 70s after the Israeli attacks on Lebanon. Hezbollah is a result, not a cause!

Among the many expressions that are commonly associated with Hezbollah, sacrifice and martyrdom speak to me the most. I believe that the road to freedom and dignity is paved with sacrifice and blood, and being a martyr for defending my land would be the greatest value ever.

I have never been a beneficiary of Hezbollah’s social services, but I put my kids in a school sponsored by Hezbollah. There is no specific Hezbollah curriculum in this school, however, they commemorate certain Islamic Shia occasions in a particular way, for instance the memory of Ashura. I consider Hezbollah’s protection of my family and myself as the most valuable service the party is giving me.

I don’t wear a Hijab because I think that this is not a main duty amongst our Islamic duties and that it is more of a social phenomenon. It is my free will not to wear the Hijab. It is normal in our society to have veiled and non-veiled women. Not putting on the Hijab hasn’t affected my life at all; I can freely express my opinions. I might put the Hijab on if I would change my beliefs and my ways of thinking. But no one can force me to put it on except God.

Women have important roles in our society. They are the ones who instill the awareness in younger generations for the noble goals of the resistance. The acceptance of a martyr’s mother, wife or daughter demonstrates a tremendous dedication and faith in Hezbollah’s cause. Hezbollah’s message for young people is that our dignity and our land are worth dying for.

I like to think that South Lebanon is not Hezbollah, but South Lebanon is ‘the resistance’. Our struggle with Israel started much before the existence of Hezbollah and it won’t stop with Hezbollah’s end but with Israel’s end. To this day, Israel is still invading our airspace, is stealing our water, is kidnapping our citizens and is spying on us.

Before the year 2000 – the year of the liberation from Israel – South Lebanon had been forgotten by the Lebanese government. Today the Lebanese who don’t live in the south are still fearful of visiting us. They believe that it is not safe here, which is a very wrong view since you can’t see any armed scenes in the south except with the Lebanese army.

There is a famous saying about Lebanon and Syria, which is ‘one people, two countries’. It is not a Syrian revolution against the government anymore, it is an American-Gulf agenda to destroy Syria because of its continuous support for the resistance that defeated Israel in 2000 and 2006. If Syria would fall, Lebanon would be affected in a negative way immediately. I would love to see the media focus more on the fighters coming from all over the world to combat the Syrian regime. At least Lebanon is on the Syrian borders, but I don’t understand Tunisian, Chechen and Afghani fighters coming to Syria!

Hezbollah started doing politics in the 90s, they have allies in the parliament and have signed an agreement with the biggest Christian party in Lebanon, Michel Aoun’s Free Patriotic Movement. So yes, Hezbollah is not only proficient in fighting with arms but they can do politics as well.

Hezbollah can be a role model in its honesty, transparency and devotion to its cause. Many Hezbollah leaders have martyred sons while other Lebanese leaders’ sons travel abroad to study and to prepare themselves to take over daddy’s leadership.”

“My name is Sana’a, I am 20 years old and I am a student. I am a non-religious Muslim with a Christian mother; my hobbies are reading, listening to music and I have an obsession with the “Friends” series.

I am an anti-Zionist, anti-imperialist and I lean towards left-wing politics. Resistance is like a religion to me that I worship. I believe in the pride of all of Lebanon, not only of South Lebanon.

“I do not wear the Hijab but I respect the women who do…The reason why I don’t wear it is because I am not very religious, nothing more, nothing less.”

I am not a member of Hezbollah and I don’t call myself a sympathizer. Hezbollah are my people; the fighters are my cousins, my brothers, my children, my family’s friends. They are not foreigners, they belong to this country, they are the sons of this country. One cannot ask who are Hezbollah because we all are Hezbollah.

Hezbollah are our liberators and they are also our protector against the continuous Israeli aggression. Hezbollah gives us a sense of security.

Among the many expressions usually linked with Hezbollah, ‘fighting injustice’ is what appeals most to me. Injustice can be anything, from poverty to racism to sectarianism. I am strongly against fatalism: if you want something, you have to fight for it.

For me, martyrdom is a selfless concept. One must remember that you don’t necessarily have to fight to be a martyr. Children can be martyrs. Anyone who dies as a result of oppression or injustice is a martyr.

I went to a Hezbollah sponsored school for a few years, but we didn’t have any particular lessons with resistance related teachings. We had religious classes though, with much emphasis on tolerance. However, we were taught not to accept humiliation no matter what. That was mostly done by teaching us about the martyrdom of the Muslim prophet and how he did not bow down to injustice and humiliation.

I do not wear the Hijab but I respect the women who do. I see no problem in wearing it in the future after reading more about it. The reason why I don’t wear it is because I am not very religious, nothing more, nothing less. I have never been treated differently by anyone in this community because I don’t wear the Hijab.

Hezbollah is a promoter of women’s rights; they encourage women to take part in all fields of life. Many of Hezbollah’s social services that are funded by the party are headed by women and Hezbollah has in the past nominated women to run for parliament. We, as women, are encouraged by the resistance to increase our knowledge in all areas because only then we will be able to fight for our rights and express our views. A wide range of women support Hezbollah. I mean, even Haifa Wehbe does!

As much as we have had several wars with Israel, I think that South Lebanon is one of the most peaceful places in Lebanon. You hardly hear of conflict, neighbors are friendly to each other and we also have Christians here with whom there is never an issue. Actually, I went to a Christian school myself for some time.

In 2013, besides resisting against Israel, Hezbollah resists against any imperialism gift-wrapped in ‘freedom’. This is part of the resistance ideology. In Syria, the West, together with the Gulf states, are the aggressors, and most of them are supporters of Zionist Israel. Hezbollah views the conflict in Syria as an imperialist agenda against Syria and the resistance axis.

People in the south love Sayyed Hassan Nasrallah because he is honest, more honest than any leader we have seen. He respects people’ minds; Hezbollah has no cult of personality. Even Israelis, in various polls, have acknowledged that Nasrallah is more honest than their own leaders.

There are two main misconceptions about Hezbollah: firstly, that they are intolerant Muslim extremists. They are not! As a matter of fact, Hezbollah has a secular military branch that many fighters from other sects have chosen to join. For some in the West, resistance is equal to terrorism. However, any comparison with Al Qaeda is completely wrong. In fact, Hezbollah is fighting Al Qaeda in Syria right now.

The second misconception is that Hezbollah controls everybody’s personal life in South Lebanon. This is not true. Hezbollah is not a totalitarian party. Hezbollah doesn’t interfere in personal lives, it doesn’t care what people drink or eat. Some places in the south sell alcohol without Hezbollah intervening; this is not the party’s goal.

The idea that drives Hezbollah is ‘no to humiliation’. This alone should appeal to all sects, even to Jews who have been persecuted under Hitler and before. With creating a secular branch, Hezbollah has left room for those who prefer not to fight under an Islamist resistance banner. In 2009 the party dropped a lot of its Islamist policies that it had held before. Hezbollah would not be so strong if it only had Shia support. I am convinced that Hezbollah’s ideology is not a barrier for religious coexistence.”

ALSO READ: A voice for peace in war-torn Tripoli

For people and politicians in Europe and the United States (and for many in Lebanon), Hezbollah keeps being the controversial movement with an enigmatic agenda. Will this perception change after a nuclear deal has been signed with Iran? The biggest menace these days in the Middle East is the growing number of Al Qaeda-linked Salafist-takfiri militants proliferating across western Iraq, northeastern Syria and north of Lebanon. These militants are of great concern for both the West and Iran. All of a sudden, Hezbollah, in fighting these forces in Syria, could find itself on the right side of Western history. Or, as Oscar Wilde once famously said: “The only difference between the saint and the sinner is that every saint has a past, and every sinner has a future.”

Views expressed in this article are the author’s and the interviewees and do not necessarily correspond to those of Your Middle East.