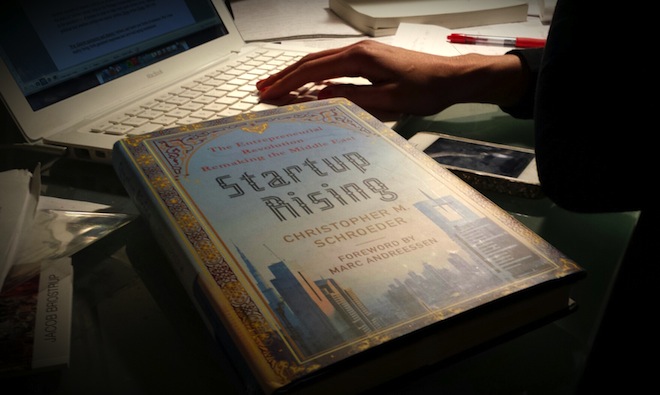 Finally, some positive news from the Middle East. Here comes an optimistic lens on the entrepreneurial tsunami reverberating through the capitals of the region - and why you need to join.

There is a movement on the ground across the Middle East, driven by young entrepreneurs’ thirst for technological innovation. It started before the Arab Spring. Now, they are building their own enterprises and take influence from start-ups in the global market while being mentored by Arab leaders. There is an ecosystem emerging around these young energetic people, including venture funds, accelerators, incubators, and platforms that encourage entrepreneurs to develop their ideas. “Success breeds more success.”

“He decided to return to the region and meet more entrepreneurs…”

Christopher Schroeder, a successful entrepreneur and venture investor, spent a year in the region meeting and documenting this entrepreneurial wave. He originally arrived to speak at a WAMDA (www.wamda.org) event in 2010 and was so impressed with the vitality of the people he encountered, that he decided to return to the region and meet more entrepreneurs in cities such as Cairo, Damascus, Amman, and Dubai. The result is the newly published book Startup Rising, which is a celebration of the entrepreneurial spirit in modern day Middle East. The depiction is of the game changers – investors, problem solvers, innovators, building their own ecosystem of invention despite the instability overshadowing these countries.

“The Middle East ecosystem has gone from engaging and connecting with technology, wondering ‘Can it happen here?’ to confidently proclaiming, “It is happening here,'” Schroeder writes.

Historically, the region has fostered an innate entrepreneurial spirit. Just look at the diversity of merchants hawking their ware such as flags and patriotic hats in Tahrir Square during the Egyptian Revolution. Yet, over the past decades, young people were not encouraged to start their own businesses, but rather tried to find a secure government job, or join the family business. ‘Failure’ was frowned upon in the Arab culture. Going solo was far too risky.

Fortunately, there is a paradigm shift taking place. Technology is offering an “irreversible level of transparency, connectivity and inexpensive access to capital and markets unprecedented five years ago.” The technological field is less susceptible to turbulence and is more resilient to the fluctuations characteristic of the region.  For example, in Egypt, there will be a penetration of smartphones of 50%, which means half the population “walking with super computing capacity in their pockets.”  The Middle East has over 350 million people of which 100 million are under the age of 15. Disposable income has grown 50% over the past three years to over $1 trillion in 2012. The e-commerce sector globally was over $7 trillion in 2011. Yet in the Middle East, this came to a mere $300 Million.

This is a blatantly huge gap here and there are those who have picked up on this opportunity.  There is an eagerness to learn, the launching tests are cheaper and faster, the engineering labor is less costly than in other regions but not less talented. Creating a business in the e-commerce sector also empowers others.

“We are e-commerce enablers,” Elias Ghanem of PayPal Middle East tells Schroeder. “In all the markets that I’ve launched consumer financial products, I’ve never seen so many people starting a meeting with us saying, ‘Finally, you are here.’”

Improvisers – emulating an existing site and translating it to Arabic ( Attlibi.com – the Arabic Webmd, Arabatrimony.com dating site, Alubsba.comB2B)Problem solvers – offering a solution for a local problem (Bey2ollak navigating in traffic in Cairo)Global players – a start up geared towards international markets

The author continues to describe the three types of endorsers of these young entrepreneurs: a) Investor – figures providing money and mentorship; b) Conveners  – platforms which help connect the entrepreneurs with each other and capital; and c) Recognizers – competitions being organized to provide exposure to ideas/entrepreneurs.

So each of us Middle East observers can place ourselves in one of these categories, whether we are originating an idea, investing, mentoring, participating in the audience of a competition, or purchasing their product.  Despite the unique challenges and circumstances they are facing, Schroeder claims the best innovation will come from the ground up in the following three areas: mobile technology, solar energy, and social networks.

“Entrepreneurship is about getting around the bullshit.”

There are several pillars of the entrepreneurial ecosystem. Look at WAMDA, founded by regional giants such as Fadi Ghandour, founder of Aramex and Arif Naqvi, Chairman of Abraaj Fund. The portal mentors entrepreneurs and helps to establish the ‘ecosystem’ which strengthens the confidence for these young entrepreneurs. There are also venture capital funds directed specifically towards the Middle East such as Silicon Badia and Sadara, or Sawari Ventures. Furthermore, there are regional accelerators mushrooming such as Oasis500, Flat6Labs, and TechWadi, as well as numerous conferences for the tech industry.

There are still obstacles such as cumbersome regulations of company registration and valuation. The typical seed money such as convertible loans are still not accepted or recognized in the region. The legal system protecting the investor needs to be revamped. The local money traditionally desires investments in property, real estate and not something intangible such as the modern start-up. Let’s not mention the political turbulence taking place. But as Habib Haddad, the CEO of WAMDA,  exclaims boldly, “Entrepreneurship is about getting around the bullshit.”

Those innovators whom pick up the transforming nuances of this region can take advantage of an emerging ecosystem and recognize the opportunities. After all, as Linda Gotenberg of Endeavor Fund puts it, “Chaos is the catalyst of innovation.”