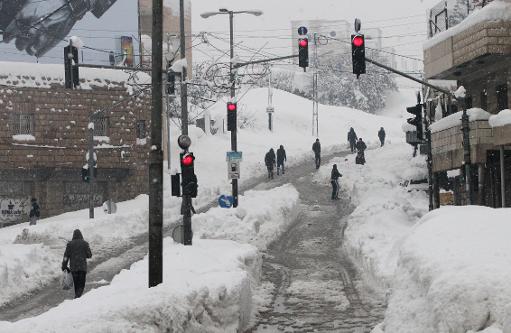 Before they were evicted, the Israeli settlers threw bottles of urine, attacked children and poisoned a horse, according to Palestinian residents in Hebron- who now fear their former neighbours will return.

When Israeli soldiers evicted the settlers in 2008 and took over the Rajabi building in the West Bank city — which is still home to hundreds of radical Israeli settlers — even the daily drag of inspections seemed civilised by comparison.

But the nightmare looks set to resume for Palestinians living near here and another flashpoint property called the Abu Rajab house, both of which have been claimed by settlers in the heart of the tense city considered holy by both Jews and Muslims.

The settlers were forced out of the Abu Rajab house last year, but Israeli Prime Minister Benjamin Netanyahu recently ordered they be allowed back in after a soldier was shot dead by a Palestinian sniper.

And Israel’s Supreme Court is set to rule on the ownership dispute over the Rajabi building, with a verdict in the settlers’ favour likely to bring back the violence and abuse.

Both properties are located close to a contested holy site known to Muslims as the Ibrahimi Mosque and to Jews as the Cave of the Patriarchs in an area called H2 — a tightly-controlled Israeli enclave where many key streets are off-limits to Palestinian cars.

Jewish settlers forced their way into the four-storey Rajabi building in 2007 but were evicted by Israeli troops the following year after a week of violence.

Settler community spokesman David Wilder said the buildings were legally acquired “through a purchasing agent for the Jewish community.”

Palestinians view the selling of property in occupied territory to Jewish settlers as a betrayal of their national cause, so such purchases are nearly always conducted in secret or through middlemen, increasing the potential for disputes.

Palestinians fear the court will rule in favour of the settlers, despite the fact that police said some of the documents had been forged.

“We’re already living in a prison,” said local shoemaker Bassem al-Jabbari, who lives opposite the property.

“I can’t park my car outside my own shop because the army has closed this road to most Palestinian vehicles,” he told AFP, motioning towards a roadblock set up when troops took over the contested property.

“But when the settlers were there it was worse… They would physically attack us, including throwing bottles of urine at us and our children,” he said.

“The settlers also poisoned my horse. They tried to steal it from me by telling the police it was theirs, but when I produced the paperwork showing I owned it, they got angry and came to poison it.”

Wilder denied settler responsibility for the horse poisoning, and blamed much of the violence on Israelis “from outside Hebron”.

“People who came in from outside Hebron behaved in ways we opposed, caused problems and did not abide by our guidelines,” he said.

Calls for resettlement ‘purely for revenge’

The Rajabi building itself is deserted, although soldiers occupy a concrete bunker on the roof. Its windows are smashed, its doors boarded up and barbed wire is stretched across the balconies. Down the sides hang two large Israeli flags.

A short walk away, down deserted streets with barricaded shopfronts, sits the Abu Rajab house.

Last year, the defence ministry ordered 15 settlers out of the property, known to Israelis as the Machpela House.

But two months ago, Netanyahu called for the three-storey property to be resettled.

Here too there is a dispute over ownership, which must eventually be decided by the court, with settlers claiming they legally purchased the top two floors.

The property’s Palestinian owners, who say they’ve been confined to the ground floor since the settlers moved in, insist letting the settlers back in would mean a return of past violence, including against local school children.

“The top two floors are now empty since they’re controlled by the Israeli state. It’s ruling our area with an iron rod,” said 26-year-old Hatim Abu Rajab, who lives with seven members of his family.

Netanyahu’s call to resettle the house in the wake of the shooting was “purely for revenge”, he said.

“But they have the weapons and we don’t, so what can we do? And in the meantime, settlers still come by regularly and try to get in, or just come by to insult us.”

The house’s Jewish claimants have pinned a notice to Abu Rajab’s door reading: “We paid. We bought it. It’s ours!!”

The headmistress of the girls’ school next door recalls the abuse her pupils suffered when the settlers were in residence, with settler children hurling both stones and verbal abuse at the schoolgirls.

But Ibtisam al-Jundi has resigned herself to the harsh realities of living in a city under military occupation, where teachers and pupils have to cross multiple checkpoints just to get to school.

“They’re regularly searched, sometimes more than doubling the time it takes them to get here. What should be a 10-15 minute walk can take 40 minutes,” she told AFP.

“The children are used to it, it’s been happening all their lifetime,” she added.

Wilder said it was not the policy of Hebron settlers to attack Arabs.

“Whether or not our children initiated attacks against Arabs, we were very careful to make sure there were no incidents,” Wilder said.