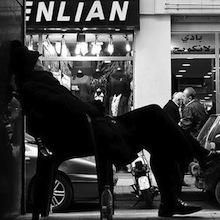 The Lebanese audience, passive bystanders to a gamble with their destiny, will find out in 2014 who holds the winning cards, writes Victor Argo.

The funeral of Mohamad Chatah was barely over when Lebanese President Michel Sleiman announced the news: Lebanon would receive $3 billion from Saudi Arabia to strengthen the Lebanese army.

Of course the deal was agreed upon long before Mohamad Chatah – a former Lebanese finance minister, ambassador to the United States and an adviser to Saad Hariri, the leader of the pro Saudi, pro Western March 14 movement – was assassinated in Beirut on December 27. Nevertheless, the timing of the announcement was striking. What is the sum that Saudi Arabia, an external heavyweight on the Lebanese political scene, deems adequate to compensate Lebanon for the loss of a politician of the March 14 camp? $3 billion?

All three countries involved in this deal are in the middle of a crisis situation.

Later that day, in a well orchestrated sequence of announcements, French president François Hollande declared from Riyadh, where he was visiting, that France will supply weapons to Lebanon if it is asked to. Just in case that the Lebanese wouldn’t know where to go shopping with the Saudi Arabian money.

All three countries involved in this deal are in the middle of a crisis situation. Lebanon seems to go backwards rather than forward. The country is paralyzed by a domestic confrontation between the March 14 and March 8 groups and is heavily affected by the war in neighboring Syria and a wider ideological conflict across the Middle East.

Saudi Arabia on the other hand is miffed and feels threatened by the recent rapprochement between the United States and Iran. The kingdom is looking for new allies and is currently considering to acquire nuclear weapons technology from Pakistan.

France has been punching above its weight for a long time already. Its permanent United Nations Security Council seat is a remnant from the past and has no justification today. Except for the fact that France holds a considerable amount of territories across the globe and that France still views Africa as being its turf, regardless of the fact that most African countries gained their independence more than fifty years ago.

Hollande himself is eager for a political success; if not at home, then abroad. Singlehandedly, France intervened militarily in 2013 in Mali and in the Central African Republic. France was even ready to bomb Syria alone this past summer, and was only stopped by a last minute chemical weapons deal brokered by Russia.

Recent reports show that merely an estimated 35% of the material the French army is equipped with is actually operable. The rest of the equipment is in dire need of repair or had to be left behind in the sands of the Malian desert. A tight defense budget doesn’t allow for the material to be replaced anytime soon; the French defense industry is compelled to look for customers elsewhere.

“Les extrêmes se touchent,” say the French, and indeed, the ultra-secular France, where wearing a veil in public is banned, and the Salafist monarchy of Saudi Arabia, where women are not allowed to drive cars, make for an odd couple. But when geopolitical interests converge, extremes do not only touch, they overlap!

Very often, much to the chagrin of the country and its population, geopolitical interests converge in Lebanon. The huge $3 billion figure that Saudi Arabia pledges to Lebanon is no pocket money, but is meant to be a game changer. It shows that Saudi Arabia will use any petrodollar power it has to turn the tables in the Middle East, and particularly in Lebanon, its way.

For which purpose then shall the Lebanese army be boosted with the money from Saudi Arabia? Is it to halt the war in Syria at Lebanon’s borders? Or to stop sectarian terrorism inside Lebanon, especially in Tripoli and in Beirut? Or rather to stop Hezbollah from fighting in Syria? Shall the money be used to buy weapons for the Lebanese army to subsequently disarm Hezbollah? Or can it be used to buy an effective air defense system to shoot down Israeli airplanes that fly over Lebanese territory on an almost daily basis?

Lebanon is far from having a national consensus on these questions. But without such a consensus, the money from Saudi Arabia will have the same result as money flowing into Lebanon from the United States or Iran: it serves the policies of the donor, not of the recipient. The upcoming money from Saudi Arabia is not money for the love of Lebanon; its aim is to strengthen the Saudi position in the Middle East and to counter Iran and contain Hezbollah.

Operating out of a corner, do the Saudi Arabians really know what they want and how to get to there? Or do they rather act erratically like a headless rooster in a courtyard full of chicken? In giving a lift to the Lebanese army, which is said to have much personnel subscribing to the ideology of Hezbollah, and at the same time supporting anti Assad forces in Syria, the Saudis risk to sponsor both sides of the Syrian conflict in parallel. However, it is in chaos where the potent strive best.

“More arms equals more stability”: this was the Cold War formula. But this is the Middle East, this is 2014. The rules of the games are different. Here and today, the valid formula is “more money equals more war.” After the 1973 Yom Kippur war of Syria and Egypt with Israel, a lot of money was flowing into Lebanon. Two years later the Lebanese civil war started.

The $3 billion from Saudi Arabia are a serious bet at the poker table that is Lebanon. Some even call it a declaration of war. The opponents of Saudi Arabia will be either forced to fold their hands – improbable -, to call the Saudi hand or to raise the bets themselves. The Lebanese audience, passive bystanders to a gamble with their destiny, will find out in 2014 who holds the winning cards. Who will go all-in first in Lebanon’s casino?