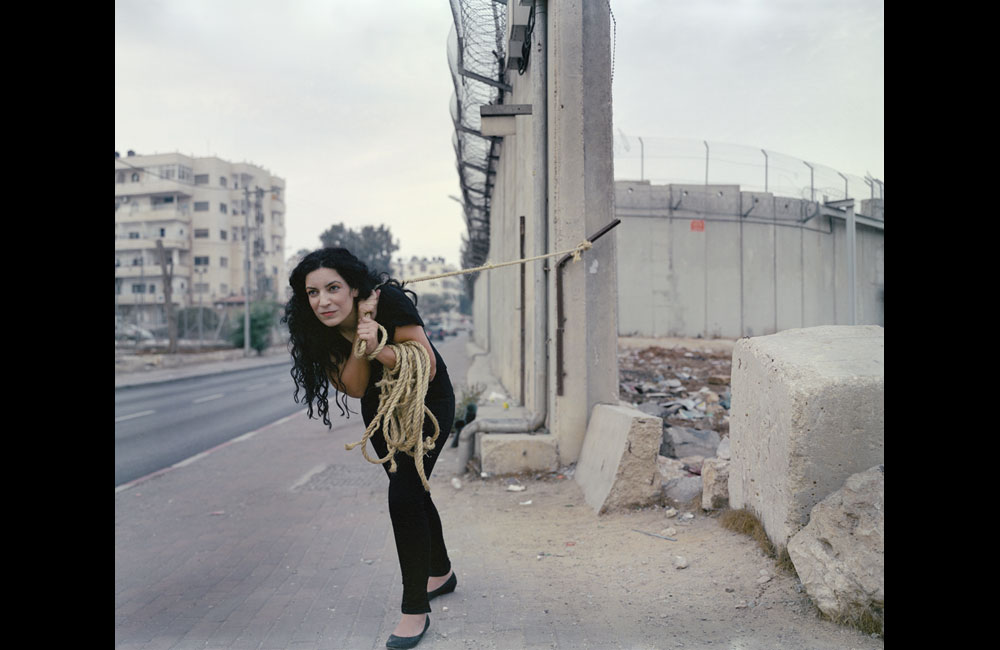 The Israeli Separation Wall, snaking alongside and within the West Bank border, presents layers of friction, both physical and symbolic. The wall has become the structure that solidifies the entrapment, oppression, control, surveillance, ongoing land grab and physical dominance that the Israelis have placed onto Palestinians.  The Wall has been an eternal source of frustration and many artists, writers and politicians have come to voice their aversion and anger towards it. The discussion on the wall, which began before the laying of the first brick more than ten years ago, has become a global one; it is not only Palestinians and Israelis who have voiced reactions, but artists, documentarians and writers from around the world.

By now, many books have been produced analyzing the wall visually, politically and metaphorically. To name a few, there are William Parry’s “Against the Wall: The Art of Resistance in Palestine”; William Sutcliffe’s political fable, “The Wall”; “A Wall in Palestine” by French journalist Rene Backmann. The Wall has become a trope; it’s tall, deep grey concrete panels are a recognized sight, featured in movies and art works either as background signifying place or a source of conflict within the narrative.

The wall itself has become what some uncomfortably refer to as a ‘canvas’. Graffiti, photos, text and murals adorn it, some of which are by now recognized works in themselves. Bringing several of these ideas together in one book is “Keep Your Eye on the Wall: Palestinian Landscapes”, where seven award-winning artists and four essayists reflect on the meaning of the wall. The book is currently published in French and English with hopes of translating it into Arabic.

“Landscape is the heritage of those who inhabit it. It represents a nation’s larger self, its place in the world, its pride,” states writer Raja Shahadeh in the introduction. This statement, encompassing the narrative of the book, expresses how changes in landscape mirror the changing attitudes and mentality of the people who live on it.

Edited like a curated book of artists’ works, the selection of photographic art relays feelings of entrapment, the passing of time, overcoming control and the distance of exile.

“We are not enemies, but friends,” is a quote by Abraham Lincoln written on the wall, seen in an image captured by Noel Jabbour. Her photos show the wild nature, abundantly growing messy shrubs around the military structure and the messy, curling sharpness of metal barbed wire, so entangled it looks like a haze. Raed Bawayah’s documentative portraits of young men risking their lives to cross over the wall to work any physical job they can get once they are on the other side show the wall to be a trap, a structure that they have no choice but to cross by any means in order to make a living.

German photographer, Kai Wiedenhofer creates his images from a global perspective.  Having witnessed the fall of the Berlin Wall in 1989, he was very moved by what walls mean to human interaction. He documented the building of the Separation Wall, as well as eight other walls around the world in the United States, Cyprus, Iraq among other places.

Steve Sabella and Taysir Batnaji present the most conflicted ideas through their work.  Sabella’s images, made up of cut up and re-stitched bits of photos of details of the wall, show a tension between the detail and the bigger picture. The repeated fragments of bricks, cement and barbed wire present a mental occupation, where apathy has begun to set in, and the banality of daily life has taken over. Batniji’s images, also through details found on the wall, present the haunting element of the passing of time. Images of martyrs stuck on the walls start to rip, ruin and tear away. The portraits, resurfacing the visage of the deceased young, are either removed or covered, making them disappear once again.  Batniji’s photos present the wall as a purveyor of ghosts who have come and gone in resistance.

“Keep Your Eye on the Wall” is a documentative, emotional and intellectual exploration

Yet the mediation, almost culturization, of this friction has, in itself, become yet another layer of discussion, as essayist Malu Halasa eloquently presents in her piece Oppressive Beauty: Against Aestheticising the Wall, “Beauty can be both terrifying and visionary.” She presents the conflict between beautifying the wall and the inspiration sourced from resistance to the wall.  Having been an integral part of their lives, artists of various media and backgrounds have had to re-imagine the role of the wall on their identity, mobility and spatiality. Although work reflecting on atrocity bears witness, questions control, shares subjectivities, and imagines how to take back that control, there is still questions surrounding the wall transforming into works placed in galleries.  By quoting a number of scholars and artists, Halasa questions how art can take the role of debating power where the creation of iconoclastic pieces that express their view and experience becoming louder renditions of the reality of the structure they are responding to.

As of yet, the construction of the wall is incomplete. “By the time it is finished,” Shehadah writes in his introduction, “an estimated one million olive trees will be caught in the no-go area between the Wall and the 1967 armistice line.” Christine Leuenberger, scholar and author of the essay On Fences and Neighbors, adds, “Once completed, it is projected to be 709 km long – twice as long as the 1949 armistice line marking the boundary between Israel and the West Bank.” And so the violence continues. And just the same, people will respond to it, have experiences because of it, and be oppressed by it.

“Keep Your Eye on the Wall” is a documentative, emotional and intellectual exploration of this complex and foreboding structure.

The works from the book will be next exhibited at The Empty Quarter in Dubai during Art Dubai 2014 with plans of exhibiting at Kuwait’s Contemporary Art Platform in the same year.