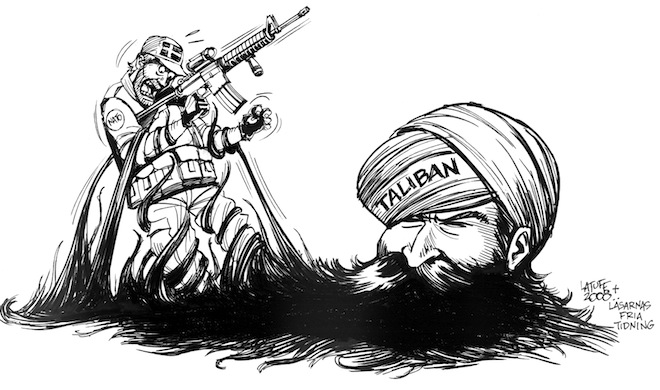 "Jihad" was from the days of Saladin abused as a propagandistic call that changed the status quo. Today, it's being exploited by monotheist fundamentalists and rightists who create false narratives about Muslim-Christian relations, writes Charlie Cooper in his latest blog post.

“I, or rather the Lord, beseech you as Christ’s heralds to publish this everywhere, and to persuade all people of whatever rank, foot-soldiers and knights, poor and rich, to carry aid promptly to those Christians (in the East) and to destroy that vile race from the lands of our friends”

As is plain to see, when Pope Urban II called for the First Crusade in 1095, he used strong terms. One could almost be forgiven for thinking he was calling for genocide. “Christ commands it”, he went on to say and, almost as a post script, “all who die by the way shall have immediate remission of sins”. This is beginning to sound very much like a call to martyrdom by Al-Qa’ida. The principal difference being, of course, that no one has “crusaded” since the medieval era (unless, that is, you take Bush Jr at his word), whereas today rarely a day goes by without militant jihad’s taking centre stage in Western media.

Given that they ended over seven centuries ago, the Crusades’ persistent relevance today is remarkable: for example, in his 1998 declaration of war against the West, Osama bin Laden repeatedly speaks of ‘crusader armies’ and the ‘crusader-Zionist alliance’; unconnected to this, but just as telling, is Hamas’ 1988 Charter, which provides a surreal retelling of contemporary politics in the Middle East within the shuttered, Manichean worldview of the 11th, 12th and 13th centuries.

It shouldn’t come as too much of a surprise that we have Sayyid Qutb, the godfather of modern-day jihad, to thank for this. It was he, after all, who revitalised the concept of the “modern-day Crusader threat” in his book, Milestones, reframing Western neo-imperialism as “a mask for the Crusading spirit”.

As such, any perceived Western incursion into Muslim-majority countries (Israel is included in this) may be viewed as part of a wider attack (or Crusade) against Muslims, thus reinforcing the “war on Islam” mindset of jihadists.

Often understood as “the starting of a millennial hostility between Islam and the West”, what the Crusades actually were has polarised all those who discuss them. For some, they were “in every way defensive wars” fought for Christianity whereas for others, they represent the “first moment of European expansion into Islamic heartlands.”

In reality, it matters little if they were religiously inspired, economically motivated expeditions or reactive, defensive measures against a swelling Islamic empire: they took place hundreds of years ago, in a world politically and socially unrecognisable from our own.

So, where does jihad fit into all this? The common conception among Islamophobes is that the Crusades were a direct reaction to jihad, only coming after the Muslims “had conquered and annihilated, or forcibly converted, over two thirds of what was formerly the Christian world”. In reality, as recent research rendered evident, forcible conversion was almost impossible during the era of the Muslim conquests, and it was not until the 11th century that Islam eventually became the majority religion in the Middle East.

This particular reading of history is little more than a politically-motivated fantasy, though: as many scholars have testified, over the preceding centuries a peaceful coexistence of sorts had emerged between Muslims and Christians. Indeed, enthusiasm for jihad, which had been so central to the early Islamic conquests, was deeply lacking among 11th century Muslims.

MORE BY CHARLIE The Jihad blog – towards a definition

There would, however, be a resurgence in jihad, one that came as a direct result of the Crusaders’ invasion of Muslim-majority lands. However, it was not an instantaneous thing: jihad re-emerged very gradually.

Over time, it ceased being something spoken of exclusively by religious scholars. Eventually, Muslim military leaders like Salah al-Din (Saladin) revitalised it fully, using it as a mechanism to further their political endeavours.

Indeed, a political tool is all military jihad was in that era (rather like it is now): besides its being an ideological means of resisting the Crusaders, it turned out to be an effective means of uniting the many disparate Muslim communities of the region together under one cause.

After all, by the 11th century, there was no strong centre of power about which Muslim peoples were gathered. The Abbasid Caliphate was in decline and the Fertile Crescent was ruled by fragmented principalities at constant loggerheads with each other.

The propagandistic invocation of jihad by Saladin (and less so, his forebears) changed this status quo. Because of it, Muslim peoples became more unified than they had been for centuries. It is perhaps for that reason that the Crusades have persisted as one of the greatest Muslim victories over “injustice” in that pseudo-medieval Islamist narrative.

So, while this three-century long geopolitical struggle must be considered in any discussion on jihad because it was during it that the concept of jihad – until then very much in decline – was reinvigorated, that is as far as it goes.

“The historical context of the Crusades is meaningless.”

To constantly refer back to the Crusades as a time in which was forged an unalterable paradigm of Muslim-Christian relations plays into false narratives.

It is, of course, the usual suspects who do it – those minority monotheist fundamentalists and rightists – simply because medieval history works well within their backwards-leaning worldview. The world should not cater to them by embracing their unoriginality.

For these familiar few, be they pundits of Jihad Watch or jihadist fora, the historical context of the Crusades is meaningless. In their version of events, things are exaggerated, manipulated to help promote a narrow set of corrupted ideas and advance their respective agendas of intolerance.

Muslim or Christian, they resolutely fail to recognise that, because the Crusades happened many centuries ago, they are an episode in the past, a part of history and not at all indicative of contemporary politics. It is, quite frankly, crazy to think that they could be.