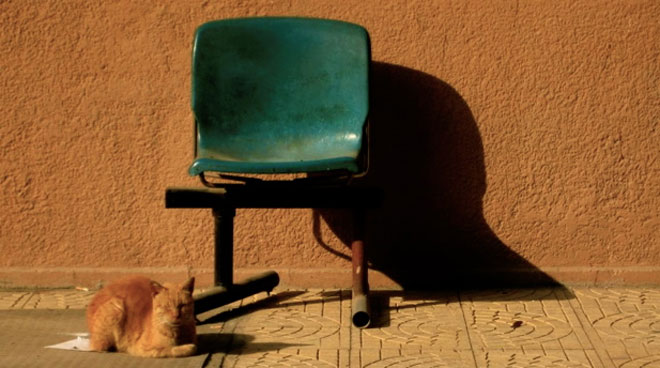 With all the political upheavals, economic woes, and social unrest plaguing Egypt these days, it can be quite difficult to recognise or acknowledge any other aspects of urban life, let alone hone in on a common, yet overlooked phenomenon such as the humble Cairene street chair.

As Manar Moursi and David Puig plan to show in their forthcoming book, Lessons from the Sidewalk: 1,001 Street Chairs in Cairo, the street chair, in all its myriad shapes, forms, colours, and mutations, is much more telling than it appears on the surface. Featuring Polaroid photographs taken by Manar and David, as well as contributions from fans and supporters, Lessons from the Sidewalk will tell not only of the phenomenon of the city’s innumerable street chairs, but also of the story of Cairo itself and its people. To find out more about their ambitious project, which has also managed to attract funding from various cultural institutions, I spoke with Manar and David about the intrigue and allure of Cairo’s street chairs.

OK … before we begin, you probably know what question I’m about to ask – why street chairs? Where did the idea come from? Why not another object?

Manar – After returning to Cairo having completed my studies at Princeton and attended a workshop in Beirut dedicated to public space (or lack thereof) in the city, I began looking at street chairs as a device to create public space. Street chairs are a banal but very present element of Cairo, almost invisible because they are so common in our lives; once you pay attention to them, though, you can’t stop looking at them. After David and I started the project, many people told us they now couldn’t stop noticing the chairs. Someone even told us that he took his family (that was visiting Cairo for the first time) on a chair tour!

One of our other main ambitions was that we wanted to talk about Cairo in a different way. Chairs allow for very different perspectives of the city to emerge, of the fabric and rhythms of the street. They also bring to the forefront socioeconomic dynamics (e.g. unemployment, idleness, poverty, etc.) and in a way reveal ideas of surveillance, paternalism, and masculinity that exist on the sidewalk. And, we also wanted to make a catalogue of chairs for designers, highlighting the creativity of street design and recycling. We’ve found some very original and cool-looking pieces.

You’re being sponsored by the British Council, as well as the Arab Fund for Arts & Culture (AFAC) and the Dutch Embassy in Cairo – what value do you think such a project holds for the former, in particular?

Manar – I think that these funds are interesting in the sense that they support emerging artists. They evaluate proposals and based on them, and decide whether or not to support particular projects. The Arab Fund for Arts & Culture receives proposals from all the Arab countries, while the British Council and Dutch Embassy grants are Cairo-based.

The British Council grant came after the 2011 uprising as an initiative to support projects and the energies that followed; it was a fast call that was not very bureaucratic. I think we really lack these kinds of rapid calls for funding in Cairo that allow for more flexibility to start something new.

How, if at all, would you say the recent upheavals in Egypt have affected the project, as well as the aesthetics of street chairs in Cairo?

Manar & David – We started walking to collect chairs in 2011 … we’ve done a lot of walks, each one lasting between one and five hours. We started at a point on a map, and just went on wherever the chairs we found on the way led us. In retrospect, this ‘ritual’ of walking may seem like one of the few constant things in our lives in the middle of all this change. While the country was going up and down, we kept on walking, following chairs. These walks could somehow be placed retrospectively outside the realm of history … as some kind of meditative routine with counting chairs as a ‘mantra’; but of course, this is just an idealised perspective from the distance of time and our apartments. In reality, the upheaval has been a part of this project as it has been with respect to everything else in this city.

On a personal level, it has allowed us to visit very different areas over a large period of time. We’ve been able to see the posters and tags on the walls, hear the Friday prayer sermons, talk with people from all walks of life, and see how this ‘revolution’ has evolved. The revolution is very different depending on where you look at it from; and of course, everybody talks politics in Egypt.

On a project level, there’s a very interesting relationship between politics and chairs, which will be very clear in the book we’re working on. Chairs have always been symbols of power in Egypt. The hieroglyph for a dignitary in ancient Egypt was the image of a man sitting on a chair. This relationship is still very strong in both an imaginary and real sense, with a person sitting on the kursi or chair signifying some sort of authority. This was evident in a graffiti and sticker campaign which went viral in Cairo, which used a chair to symbolise the reclamation of powerby the people for the people.

As well, taking pictures in Cairo – especially for our project – has always been a very sensitive matter. People don’t like having their pictures taken in poorer areas, and the police are always suspicious. We’ve been accused of spying many times, and ended up being detained for many hours before June 30, 2013. We were accused of plotting against the Morsi Government by policemen whom we later learned during detention were also against Morsi. It was an almost surreal experience to see the officer in the station going through the pile of Polaroids of chairs sitting behind his desk, surrounded by his sidekicks…

What have people on the streets had to say about what you’re doing, and how do they view this urban ‘phenomenon’?

Manar & David – People have laughed with us, invited us to tea, talked about nothing and everything with us, given us life and philosophy lessons, been curious … but they’ve also been suspicious, aggressive, and harassing at times.

The first reaction is that people usually don’t get what we’re doing: Why do you want to photograph my old, broken chair? Wait. Let me get a new one. I have a better one. Are you going to show this to the world? So, we talk to people, and explain what we’re doing. We tell them we like how they fix their chairs and how they deal with them. Once this explanation is given and people understand you want to show a positive aspect, they generally agree to cooperate. When you talk to people, it becomes very easy. This was also one of the main reasons we decided to use the Polaroid format: to establish relationships with the subjects we photographed. The chair owners also requested instant photographs from us after we photographed their chairs sometimes.

You once mentioned how construction workers like to customise (I think ‘pimp’ was the word you used) their chairs and ‘zones’ – what’s the most inventive thing you’ve come across? The weirdest?

Manar & David – Uff … there’s so much inventive stuff happening; not only construction workers, but everyone on the sidewalk has a chair. The interesting thing is to realise how the same solutions are used in different parts of the city, as if the repair and recycling methods are shared or circulated among people. In particular, we like chairs that are made of two broken chairs … fused, ‘cannibalised’ chairs …

David – I think I have a soft spot for the gireed office chair we found in Nasr City … the one made of a gireed crate base with the upper part of an office chair on top. Gireed is a very traditional material that is present everywhere, which comes from palm. The bottom of the chair is very traditional, while the upper part is modern. It works as a metaphor of the tensions of this city; it points towards our in-between condition … it’s really an art piece.

Manar – Another one that was really special was one we found in Wust El Balad … it was all wrapped up with cello tape like a mummy.

Manar & David – We’re also interested in how chairs can be more than chairs. They’re used to mark and preserve parking spots on the sidewalks, as lunch tables, as supports for mannequins to display clothes, as display stands for street shops … so many things. Andy Warhol was right when he said ‘You can do so much more with a chair than you can with a painting’.

How would you compare Cairo’s street chair ‘scene’ to that of other cities in the Arab world?

Manar & David – Cairo is definitely number one in the Arab world in terms of the quantity and density of people and chairs on the sidewalk. Cairo is a city that talks; it envelops itself in stories and rumours. Storytelling here is an old tradition that continues; all the stories and news are deformed, magnified, and shared like Chinese whispers across the sidewalks. We have come to think of the chairs as wires of transmission, relay points that pass on stories between them.

Manar – The idea of recycling is also very prominent in Cairo; people never throw anything away. I think this really influences the chairs on the sidewalk in their unintentional post-production aesthetic. One guy showed us a chair that belonged to his grandfather – everyone in the market called it Kursi Tutankhamen. It had various prostheses, and was stitched, taped, and surgically mended …

As a result of your travels throughout Cairo and your documentations, how, if at all, would you say your view of the city has changed? Are the street chairs of Cairo and their owners more telling than they appear on the surface?

Manar & David – We started to see Cairo as a universe in expansion that generates chairs as it grows. Contrary to the idea that there is a lack of ‘public space’ in Cairo, we realised that everything is public space – in the sense that like much else in the city, boundaries between private and public ownership are fluid. What is lacking here are parks, libraries, etc. … but in terms of gathering spaces, the cannibalisation of the sidewalks and cafes has effectively made street, sidewalk, and balcony a kind of ‘layer’ of public gathering space.

Along the way, the conversations we had were illuminating. When asked to relate the most significant anecdote or incident he encountered in his time spending more than 12 hours on a day on the sidewalk for years, a man in Zamalek told us he was lucky enough to see a rich woman who came out every morning to feed all the cats on the street. Her humanity moved him, even her connection to the cats. He felt connected to the cats, to the dust of the street … he felt we were all one.

View more images from the project on its Tumblr and Facebook pages. This article originally appeared with REORIENT.